Assuncao Keeps the Focus Where It Belongs

"In a way, that little bit of a chip on my shoulder keeps me hungry, keeps me motivated, and it doesn’t change" - Raphael Assuncao 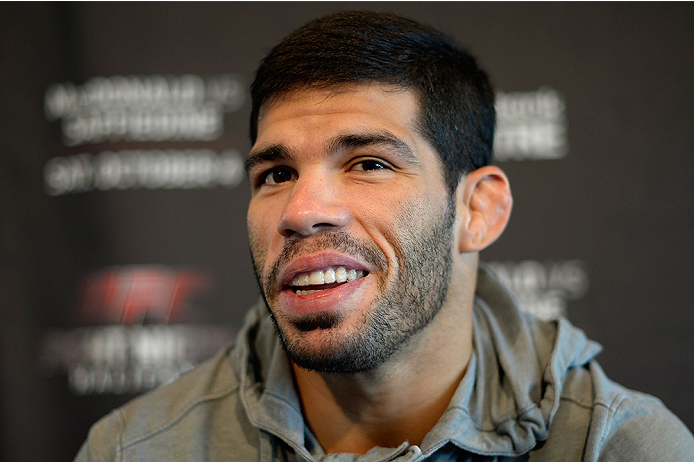 A coveted spot in a bantamweight championship fight was up for grabs. Renan Barao was out of his UFC 177 rematch against T.J. Dillashaw and the scramble was on for a replacement to save the main event. On weigh-in day no less.

It wasn’t what you think though.

“You know what, the reporters were calling me that night,” Assuncao laughs. “‘Hey would you take that fight?’ It was crazy. I had the UFC Twitter Takeover that night as well, and people kept asking me about it. I couldn’t make 20 pounds tomorrow. Even if it was a catchweight fight, it wouldn’t be for the title, so it wouldn’t work for me.”

The calls were kind of crazy, especially since Assuncao was back home in Georgia, getting ready for a bout this Saturday against Bryan Caraway in the co-main event of UFC Fight Night in Halifax, and not even on-site in Sacramento, but it seems like anytime there has been a discussion about the bantamweight title in the last year, the Brazilian’s name has been featured prominently. So flying cross country on a day’s notice to make weight and fight for a world title? Yeah, it’s ludicrous, but not surprising that he received calls asking if he would do it.

Joe Soto, scheduled to make his Octagon debut at UFC 177 against Anthony Birchak, was pulled from the undercard and given his dream shot against Dillashaw. He came up short. Assuncao, he just kept working.

“That should have been my fight anyway,” he said, believing that he should have been in the opposite corner for Dillashaw’s first defense, and not the man the Californian beat for the title in May, Barao. Now, Assuncao will be facing another wait, even if he defeats Caraway this weekend, because the spectacular return of former champ Dominick Cruz last weekend pretty much cemented his place as the next challenger for the belt. But Assuncao keeps marching forward.

“It’s tough in some ways,” he admits. “But in a way, that little bit of a chip on my shoulder keeps me hungry, keeps me motivated, and it doesn’t change. I’m maturing as a man and maturing in the sport. I feel that not only is my body changing, but mentally I’m changing as well, and I feel great. My time is going to come and I’ll be a hundred percent ready to conquer what has been my goal once the time is there.”

Winner of six straight, Assuncao has done his part to earn a crack at the title. A seventh consecutive victory would make him impossible to ignore. But seeing Cruz – who never lost his title in the Octagon, but relinquished it due to injury – get the next shot is a move few could complain about. One of those who would have a valid case is Assuncao, but first he has to vanquish Caraway on Saturday. In other words, with a loss, his title hopes will be put on ice for a while.

“I don’t look at it that way because that gives you negativity, but I’m also not overconfident,” he said. “I’m taking it (the Caraway fight) very seriously, and my whole team knows I’ve been putting in a lot of time. I don’t look past anybody or underestimate anybody. I’m very focused for this fight and I’m just ready to get in there and perform.”

If he does what he has been doing since moving from featherweight to bantamweight, a win should follow, and then it’s time to let the world know not just that he’s earned his place in the championship circle, but that there’s a compelling storyline there too, and there is, considering that the last man to beat the current champ is Assuncao, who pulled out a close split decision win over Dillashaw in October of 2013, a bout that earned the pair Fight of the Night honors.

Assuncao, who admits to a tactical mistake in the bout, believes it won’t be as close a victory the second time around.

“T.J. gave me his best shot and it didn’t faze me,” he said. “I rocked him and I made a lazy shot for his legs and he spun around and took my back, which was a technical mistake that I made, but I hurt him first. It wasn’t like he took me down, beat me up and took my back. I hurt the guy and then I made a mistake of trying to take him down.”

The 32-year-old believes there won’t be such errors in a rematch with the champ, who won his belt in stirring fashion at UFC 173. Assuncao was in attendance that night in Las Vegas, but he wasn’t as stunned by Dillashaw’s win as the rest of the MMA community was.

“I was there live for that one, and it was a good fight,” he said. “He (Dillashaw) did exactly the same thing that he did with me. He didn’t do anything different. He went southpaw, and he knows that game doesn’t work with me.”

Assuncao is not a fighter to make a lot of noise, and maybe that’s held him back in his quest for a title shot. But he’s not going to change who he is and he’s not going to worry about the future, because he has faith that everything will work out the way he wants it to.

“I believe in God and I think God’s timing is really important, and life’s time is really important,” he said. “As time goes on, you become more mature and things happen.  I should have been champion in the WEC, but I wasn’t mature enough. But I don’t regret anything. I’m going to be a champion.”