Askren Vs Maia To Headline UFC's Return To Singapore

UFC returns to Singapore on October 26 in a thrilling match-up between Demian Maia and Ben Askren
Aug. 25, 2019

UFC® is set to make its fourth stop in Singapore and brings with it a main event featuring two of the best grapplers in MMA history, as No. 10-ranked welterweight contender Demian Maia faces No. 11-ranked Ben Askren.

UFC FIGHT NIGHT: MAIA vs. ASKREN will air live from Singapore Indoor Stadium on Saturday, October 26, with the prelims starting at 5 p.m. SGT and the main card scheduled to begin at 8 p.m. SGT.

A former UFC title challenger at both welterweight and middleweight, Maia (27-9, fighting out of Sao Paulo, Brazil) is considered by many to be one of the greatest grapplers to ever compete in MMA. With 21 wins, the second most in UFC history,  Maia  holds victories over some of the best UFC has to offer, including Jorge Masvidal, Jon Fitch, Carlos Condit, and Chael Sonnen. Now, Maia looks to build another long win streak by becoming the first person in history to submit Ben Askren.

A four-time NCAA Division I All-American, a two-time national champion, and a member of the 2008 United States Olympic freestyle wrestling team, Askren (19-1, fighting out of Delafield, Wisc., USA) is one of the most decorated wrestlers to compete on the UFC roster. Undefeated prior to joining UFC, Askren debuted with a first-round submission over former UFC welterweight champion, Robbie Lawler. Now, Askren intends to bounce back from his first career loss against Masvidal by proving he is the best pure grappler in the welterweight division. 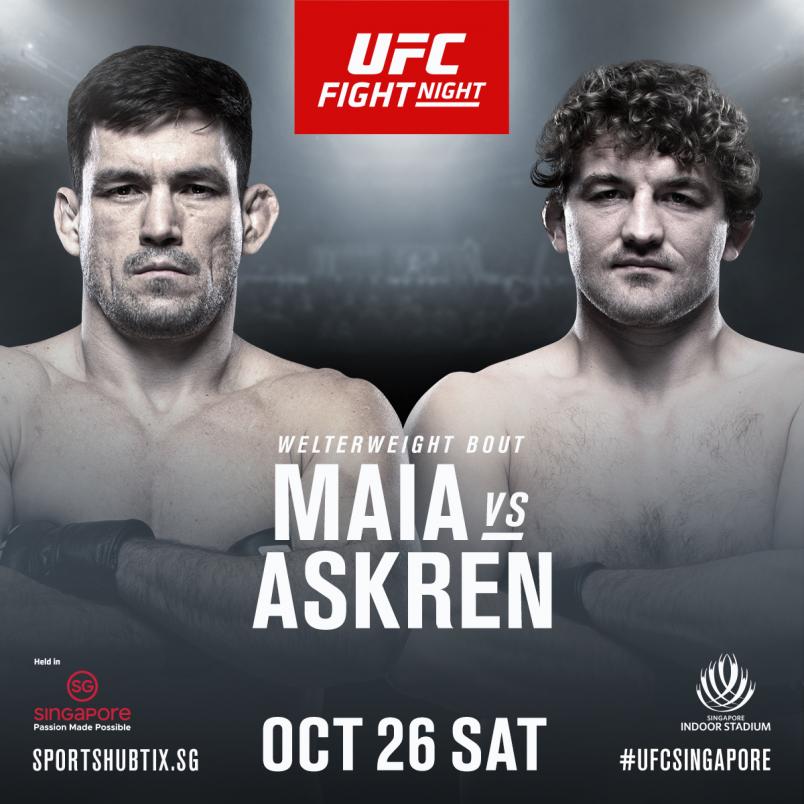 Kevin Chang, UFC Senior Vice President, Asia Pacific said, “This dream matchup features world-class grapplers vying for supremacy. Ben Askren is an accomplished wrestler who uses his squeeze to run through opponents, but he's never faced someone like Demian Maia, arguably the greatest BJJ practitioner to compete in the Octagon. This bout is a throwback for our MMA-savvy fans in Singapore who want to see a clash of fighting styles. We're excited to see this fantastic main event go down.”

UFC FIGHT NIGHT: MAIA vs. ASKREN taking place on Saturday, October 26, marks the second of three events in a multi-year partnership with Singapore Tourism Board and Singapore Sports Hub.