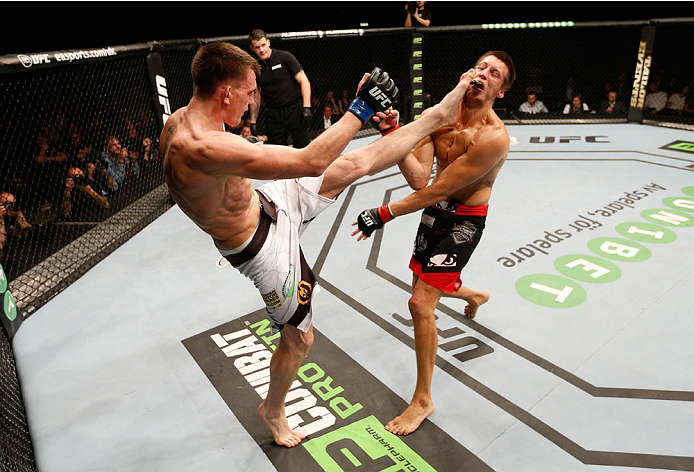 Scott Askham has had plenty of time to think about the lone loss of his mixed martial arts career, a decision defeat at the hands of Magnus Cedenblad in his UFC debut last October.

Precisely, it’s the 90-minute drive from Doncaster to Manchester’s Unit 7 Gym to train with his new team, ASW, that gives the middleweight the moments to reflect, but he chooses not to spend time on the past, as the only thing that really matters these days is beating Brazil’s Antonio Dos Santos Junior this Saturday in Berlin.

“He is in the way of my dreams and I will do anything to win this fight,” said the 27-year-old southpaw, who is in a similar spot as his opponent, who lost his first Octagon bout as well, his to Daniel Sarafian last December.

“It’s a fantastic fight for both of us, and I’m looking forward to it,” Askham added. “I watched a few of his fights, and I think there’s a few holes in his game which I can expose massively, and it’s going to be a good one.”

The last one wasn’t bad either, at least from a spectator’s point of view. Askham may have a different take on matters, but if he decided to be objective, he would have to admit that despite losing his unbeaten record, he gave a solid enough performance to earn him a call back and let fans outside of the UK know that he belonged in the big leagues.

Of course, with a jump to the big show, there are the 800 miscellaneous things that can interfere in your life like never before. Some call them the UFC jitters, but Askham doesn’t think those affected him. He will admit to getting a bit overwhelmed by the whole atmosphere on fight week, which included the UFC following him on Twitter and walking to THE UFC Octagon, but he says none of it affected what happened on fight night.

“I don’t think I had the jitters; it was more excitement,” he said. “I might have got a bit caught up in the moment in that way, but it didn’t affect my performance at all.”

What did keep him from displaying his entire arsenal in Stockholm was something he doesn’t even like to bring up, in case what he says is looked at like an excuse. But as UFC Hall of Famer Mark Coleman once said, there’s a difference between excuses and reasons.

“I think it’s a fight I could have won and I think if it’s a fight I had again I would win,” Askham said. “And I don’t want to sound like I’m making up excuses, but six, seven weeks after the fight I had surgery on both elbows. If you watch the fight, I don’t throw any elbows and I’m struggling to post to get up. But all that said, Magnus Cedenblad did a good job on the night, he got the win, and good luck to him in the future.”

Two injured elbows sounds like a good enough reason to expect a vastly different Scott Askham on Saturday, and when asked about his post-surgery elbows, he lights up.

“It’s awesome,” he said. “I can’t wait to elbow somebody’s face. (Laughs) And in the scrambles I’m going to be a lot faster, posting on my elbows and scrambling back to my feet.”

Add in the new camp and plenty of training with fellow UFC fighter Mike Wilkinson, who unfortunately was forced to withdraw from his bout at Fight Night Berlin due to a late injury, and the only question left for Askham is whether it’s safe to say that the British are coming to Berlin?

“The British are always coming,” Askham laughs. “And there will be a lot of support, like always.”