Askarov: "Impossible Is Nothing"

"I want to show that impossible is nothing, and with hard work and dedication you could achieve everything in life.”
By Thomas Gerbasi, on Twitter: @TGerbasi • Jan. 16, 2020

“For me, each fight is like a sparring session because I have trouble with my hearing,” said Askarov. “I cannot hear the boos and the crowd itself; that's why I’m always calm.”

That was evident throughout his exciting three-rounder with Moreno in September, where both 125-pounders left it all in the Octagon before a draw verdict was rendered. For Askarov, it wasn’t his favorite performance, but he did keep his unbeaten record intact with a fight that made an immediate impression on UFC fans.

“The most important lesson I took from my UFC debut is that you have to come to Mexico in advance to get used to the climate and get comfortable, in general,” said the 10-0-1 Askarov. “I was 100 percent ready and I wish I could show my whole skill set, but it is what it is, and we are moving forward.”

“Forward” is this Saturday’s showdown with Elliott in a bout that could very well steal the show from the bigger names on the UFC 246 card. Las Vegas is a long way from the village where Askarov grew up in Dagestan, but he won’t forget where he came from or how it affected what he does today.

“My village has a population of one thousand,” said Askarov, who found his way as a youngster to the only wrestling gym in town. “I always was into combat sports so I guess there was no way I wouldn’t do wrestling.”

It soon became a way of life of Askarov, a place where the partially deaf wrestler could compete on a level playing field. And even while spending most of his free time on the mats, he saw wrestling as a way to another sport down the line.

“I was thinking that I could turn this into MMA through all my wrestling career,” he said. “I started combat sambo so I could understand how to combine wrestling with striking and then I started my MMA career. I looked up to Fedor Emelianenko and Volk Khan.”

Ultimately, Askarov would have even more fighters to look up to as Dagestan became a hotbed for MMA competitors who would soon make their way to the UFC, chief among them UFC lightweight champion Khabib Nurmagomedov.

“We have a lot of Dagestani guys in the UFC today maybe because of our history and culture,” said Askarov. “Fighting is in our DNA.” 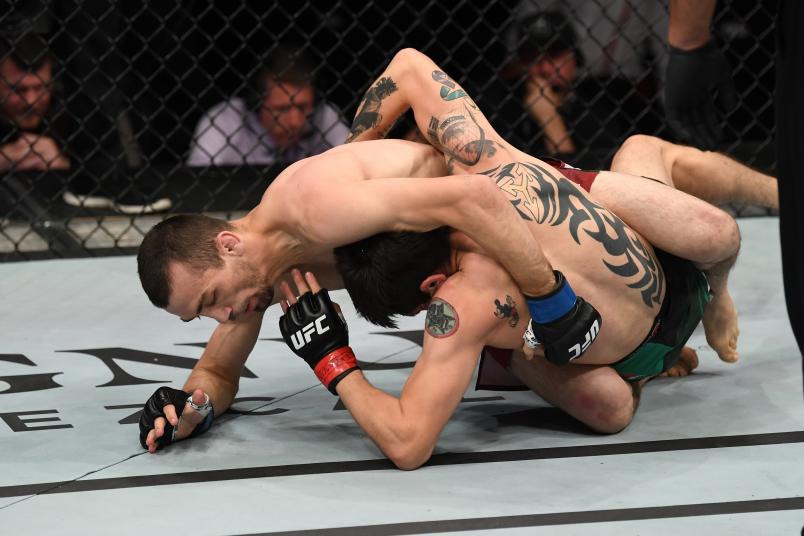 MEXICO CITY, MEXICO - SEPTEMBER 21: (L-R) Askar Askarov of Russia and Brandon Moreno of Mexico grapple in their flyweight bout during the UFC Fight Night event on September 21, 2019 in Mexico City, Mexico. (Photo by Josh Hedges/Zuffa LLC/Zuffa LLC via Get

And it was certainly in the DNA of Askarov, who won several titles in wrestling, grappling and MMA, chief among them the Deaflympics wrestling title in 2017.

By then, Askarov was already competing in MMA, defeating the likes of UFC vet Jose Maria Tome and WEC / Strikeforce vet Anthony Leone, and it was clear that he was going to follow in the footsteps of another deaf athlete – Matt Hamill – in getting to the UFC.

“I didn't have any inspiration like Matt Hamill because unfortunately I just heard about him recently,” said Askarov. “But if I would have known about him earlier in my career he could be one of my biggest inspirations. It is hard to compete on a high level with such a health issue, but it motivates me a lot. And this might be the key of my success.”

It also may be the reason the 27-year-old can be a role model for other young athletes in the same position who just need a chance to show their talents.

“Yes, it is a big honor to be a role model for the young generation,” said Askarov. “I want to show that impossible is nothing, and with hard work and dedication you could achieve everything in life.”

Right now, the goal is a world championship, and with Askarov already in the top 15 heading into his bout with the No. 7-ranked Elliott, he may be in the title picture sooner rather than later. And that’s just fine with “Bullet.”

“My managers Ali Abdelaziz and Rizvan Magomedov are doing a great job to evolve my career,” said Askarov, who keeps it simple when asked what his 2020 outlook is.