Injuries Behind Him, Flyweight Looks To Continue Dominant Streak vs Kai Kara-France
By E. Spencer Kyte, on Twitter @SpencerKyte • Mar. 21, 2022

Matt Hamill showed that deaf athletes can compete inside the Octagon several years ago, graduating to the UFC after a strong run on Season 3 of The Ultimate Fighter before amassing 15 appearances in the light heavyweight division, competing against the likes of Michael Bisping, Rich Franklin, Jon Jones, Tito Ortiz, and Alexander Gustafsson.

This weekend, Askar Askarov looks to shift from following in Hamill’s footsteps to forging a new path by taking out Kai Kara-France and putting himself in position to potentially challenge for the UFC flyweight title later this year.

“I’m very happy and proud to represent deaf community and I always feel their support,” Askarov said through a translator in the lead up to his clash with Kara-France on Saturday.

Despite having roughly 80 percent hearing loss, Askarov has thrived throughout his athletic career. Like Hamill, the 29-year-old was a wrestling gold medalist at the Deaflympics, following up that effort with a bronze medal at the World Deaf Championship before making the move to the UFC.

After battling former champion Brandon Moreno to a draw in his debut, Askarov has collected three straight victories to push his record to 14-0-1 heading into this weekend’s clash with the ascending talent from New Zealand.

“I train same way as all other fighters,” said Askarov when asked about his preparations, given that he cannot hear instructions mid-fight the same way his opponents can. “I’m not doing anything specific; just hard work and dedication, that what means the most.”

Askarov has been on the cusp of contention for well over a year now, establishing himself as a legitimate threat with a unanimous decision win over Alexandre Pantoja two summers ago in Abu Dhabi and following it with a similar result opposite perennial contender Joseph Benavidez last March. But the championship trilogy between Moreno and Deiveson Figueiredo, coupled with a stint on the sidelines due to injury allowed the rest of the contending pack to gain ground on him, including Kara-France.

While most would view losing pole position in the chase for the championship as a frustration, the unbeaten rising star sees his time away as a net positive. 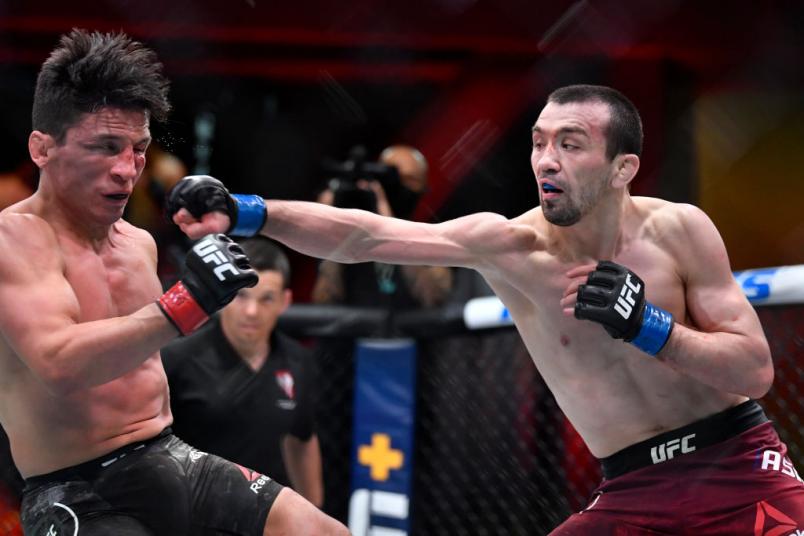 Askar Askaarov of Russia punches Joseph Benavidez in their flyweight fight during the UFC 259 event at UFC APEX on March 06, 2021 in Las Vegas, Nevada. (Photo by Chris Unger/Zuffa LLC)

“I injured my wrist — it was an old injury I received way before UFC — and in the last few fights, it really bothered me and pain was getting worse,” Askarov explained. “In the end, when I came to Vegas for a camp, doctors pulled me out from fights and they scheduled surgery right away.

“I became more motivated and I have more hunger now because of the layoff,” he added. “I’ve also benefited from it: I’ve finally rested, got my body fully recovered, healed all the injuries and, of course, I got to spend more time with my family.”

Brandishing a surgically repaired wrist and feeling at full strength for the first time in his UFC career, Askarov is hopeful that a return to full health will translate into a return to the finishing ways he displayed prior to stepping inside the Octagon.

“I’ve always felt great inside the cage, but I feel I didn’t show 100 percent of myself yet because of injuries,” said Askarov, who went 11-0 with 11 finishes during his pre-UFC run. “Now I’m very confident I’ll bring my 100 percent finish ratio back.”

It would be a particularly noteworthy feat if he were to return to his finishing ways this weekend, because over the last five years, beating Kara-France has proven extremely difficult. 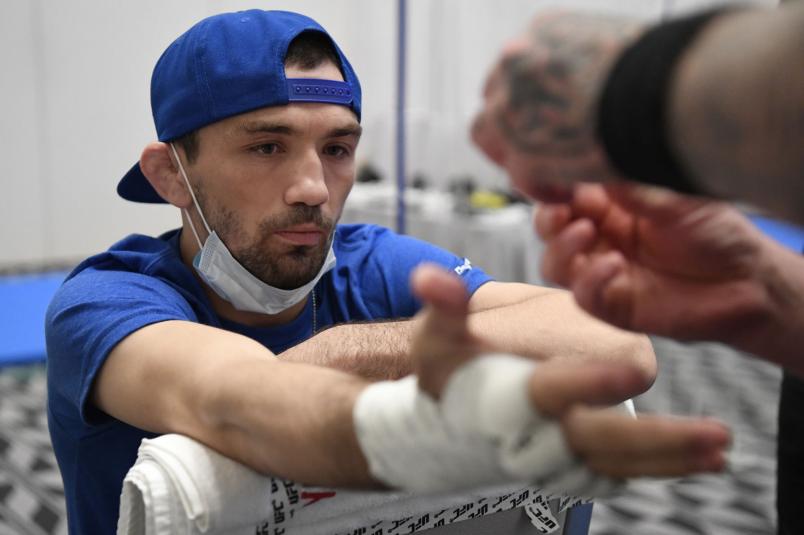 Askar Askarov of Russia has his hands wrapped prior to his fight during the UFC Fight Night event inside Flash Forum on UFC Fight Island on July 19, 2020 in Yas Island, Abu Dhabi, United Arab Emirates. (Photo by Mike Roach/Zuffa LLC)

A member of the cast on Season 24 of The Ultimate Fighter, the 28-year-old City Kickboxing representative wasn’t immediately asked to join the UFC roster after losing to Pantoja in the quarterfinals. Instead, he returned to the regional circuit and racked up four victories in 2017 and another in early 2018 to earn a call to the Octagon.

Since arriving on the big stage, the heavy-handed flyweight has posted a 6-2 record, including consecutive first-round stoppage wins over Rogerio Bontorin and Cody Garbrandt that showcased his fight-changing power.

The flyweight combatants have chirped at one another a time or two on social media in the build to this weekend’s pivotal clash, but Askarov says he has nothing but respect for Kara-France.

“I don’t have any bad blood with Kai,” he said when asked about the chippiness between the two. “He’s great fighter and we’re sharing the same dream.

While their business meeting takes place in Columbus on Saturday, Askarov made the decision to travel to the United States early, setting up shop in Las Vegas for the final three weeks of his camp in order to deal with any jet lag or challenges acclimating in advance.

You going to be my chicken Australian guy https://t.co/bEM2bcF3Zs

With preparations complete, all that remains is to make the walk on Saturday night, step into the Octagon with Kara-France, and handle his business.

“I’m thinking I will choke him out in the second, but I don’t care,” Askarov said when asked how he sees the fight playing out this weekend. “I wouldn’t mind to fight the whole distance.”

And if he does come away victorious, there is only one thing he wants next.

“It would mean the world to me to become a UFC world champion,” he said. “I worked so hard through all these years and I keep working hard to reach my goal.

“After this fight, I truly believe I deserve title shot next, but it’s up to (UFC President) Dana (White), obviously.”