It was a close fight between strawweights Ashley Yoder and Miranda Granger heading into the third and final round in Las Vegas on November 14.

Then Yoder turned on the jets.

“Going into the third, I told myself it's 1-1, I have to show them that I want to be here and just let it go, and that's something I wanted to do in the first couple rounds, but it clicked in the third round,” she said. “I didn't rush for any kind of submission, I just let it open up with punches. It felt really good, and that third round was probably one of my favorite rounds of all my fights that I've had.”

That third round clinched the unanimous decision victory for the Indiana native, and while it was one of her favorite rounds, it was also one of her best, a five-minute capsule of what Yoder can do when she’s on top of her game. And even though she didn’t get the complete fight she wanted, a win is a win, and she’ll take it.

“This was my first camp that I was working with a mental sports coach and from the time I weighed in until I stepped in the Octagon, I actually felt the best I've ever felt,” Yoder said. “In that first round, there was a little bit of a late start to get going, and that's where the disappointment comes in. But even in the first and second round, I just seemed really overprotective on position once I got to the ground, not to put that round in jeopardy for whatever reason.”

If you want to call that being a little cautious and wanting to make sure she got the points she needed to win on the scorecards, she will likely plead guilty, and with good reason, as she went into the bout on the heels of back-to-back losses to Randa Markos and Livinha Souza. Three straight wouldn’t be a good look, as she’s been there before, but as 2020 turns into 2021, those are questions she won’t have to answer after picking up her third Octagon win. 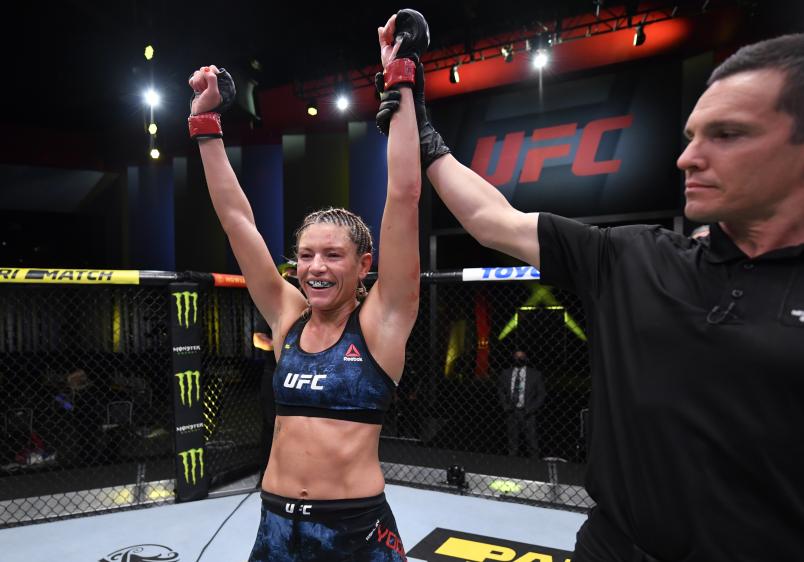 Ashley Yoder reacts after her victory over Miranda Granger in a strawweight fight during the UFC Fight Night event at UFC APEX on November 14, 2020 in Las Vegas, Nevada. (Photo by Jeff Bottari/Zuffa LLC)

“I’m really happy,” she said. “You're feeling like you got the wind back in your sails. Every time, win, lose or draw, you're going back to try to be better, but it was a little bit of weight off my shoulders. That three-strike rule is always in the back of your mind. I've been fortunate enough to miss the axe multiple times, but I’ve always had performances where I think I'm worthy of staying there, even with losses. Questionable or not, the performances that I bring are fan friendly. It's always an exciting fight, usually pretty bloody. (Laughs) So it's a little bit of weight off my shoulders. I wasn't extremely proud of this performance, but I sat back and I'm gonna accept the win and enjoy it, and not let the perfectionist in me break that will or take that joy away.”

Yoder has always been entertaining over the course of an eight-fight stint in the UFC that began in 2016. And while that Octagon ledger reads 3-5 at the moment, that also includes split decision losses to Mackenzie Dern and Randa Markos, and other close fights that could might gone in her direction if she got a break or two. And she’s never been finished. In other words, that 3-5 record could easily be 8-0 and this late-year conversation would be a lot different.

But Yoder doesn’t dwell on what could have beens. As soon as the Granger fight was over, she didn’t go and eat everything she wanted or take a two-month break from the gym. Instead, there was a brief break and back to work.

“There's only a couple things (I wanted to eat), and I still haven't eaten it yet,” she said in mid-December. “I really wanted Korean barbecue. (Laughs) But I did take two weeks off and relaxed for a little bit. I kinda wish I didn't just because with all these fights falling out, being able to get back in there would have been pretty cool before the end of the year. I really wasn't expecting to get the call if there was one, but now I'm back in the gym, training again, getting in shape like it's the first time in my life and it's awful (Laughs), so I would never recommend taking two full weeks off from anything. I want to always be ready. Sometimes we need that mental break, just from life and training. And having two fight camps pretty much back-to-back and not really taking time off between those two, you gotta take a little bit of time for yourself.”

Hopefully, Yoder got her Korean BBQ fix over the holidays because if she has her way, 2021 will be a busy (and career-defining) one for the Brazilian Jiu-Jitsu black belt.

“I'm hoping to get in there at least three times in 2021, hopefully four or five,” she said. “I really like the opportunity to be able to pick up fights more than I did pre-pandemic. Ring rust is real and that's keeping it off.

“My record doesn't do my talent or my technique justice but, at the same time, I think all these obstacles that I've faced have really molded me into my true potential,” Yoder continues. “Everything happens for a reason and it's really starting to click. I still have so much fight in me. I am a little bit older for some of the new younger kids coming in, but I haven't had the wear and tear of a past career in wrestling growing up. I've put the wear and tear in the last ten years, and that's not that much for a martial artist. So I think I'm rounding out to show my true potential and I feel like it's coming, I really do. I feel confident that I'm still growing and I'm still learning, and I'm really excited about the future.”