You would think that after back-to-back wins over Amanda Cooper and Syuri Kondo, the days of Ashley Yoder being asked about the three-fight losing streak that started her UFC career were over.

“It’s funny, they still ask me about the losing streak,” she laughs. “‘So, are you gonna be at 3-0 now after your really bad losing streak?’ Being in this business, you just have to embrace the journey of fighting. Some of that means going through some bad decisions, and whether I believe they should have been the other way or not, they were what they were and I did grow from that. And I’m really excited to hopefully get everything completely turned around with this next fight.”

The next fight for Yoder is in Singapore this Saturday against another fighter who has gone through her share of bad luck in the Octagon in Canada’s Randa Markos. So while the strawweights’ records may not show it, they are two of the best in the division, and just being in the UFC and considered among the top 115-pounders in the game is a victory for the 32-year-old Yoder, who came to the sport at 20 with no wrestling, striking or martial arts history to back her up.

“I didn’t have a background,” she said. “I don’t even want to say I was a dark horse, I’m like a dark goat. (Laughs) I’m not supposed to be in the position as a pro athlete. But I am.”

So while the rollercoaster ride of mixed martial arts breaks some, it only steeled the resolve of the Indiana native, who has rapidly become a fan favorite and an inspiration for the aspiring fighters who enter the Team Quest gym wanting to follow in the footsteps of their favorite UFC stars.

“I tell them, ‘You put your hard work in, it can happen,’” she said. “I’m the perfect example of an exception to the rule.”

That’s not the only way Yoder is inspiring other people, though. Before her June win over Kondo, ESPN featured the story of the tragic death of Yoder’s brother Michael in a car / motorcycle accident on her 18th birthday. She later turned to fighting to deal with the pain of the loss, and it was this honesty in telling her story that garnered her even more fans who had dealt with similar tragedies.

“I never even realized how important the platform of being professional athletes on the level that we are is,” said Yoder. “When I was on The Ultimate Fighter, I was telling a couple girls the story of my brother’s accident. At the time, fight fans who were watching the show reached out to me – people from all over the world. That was the first time it hit me that I have a purpose. Before, I was doing it for anger management, but now I can give people inspiration. 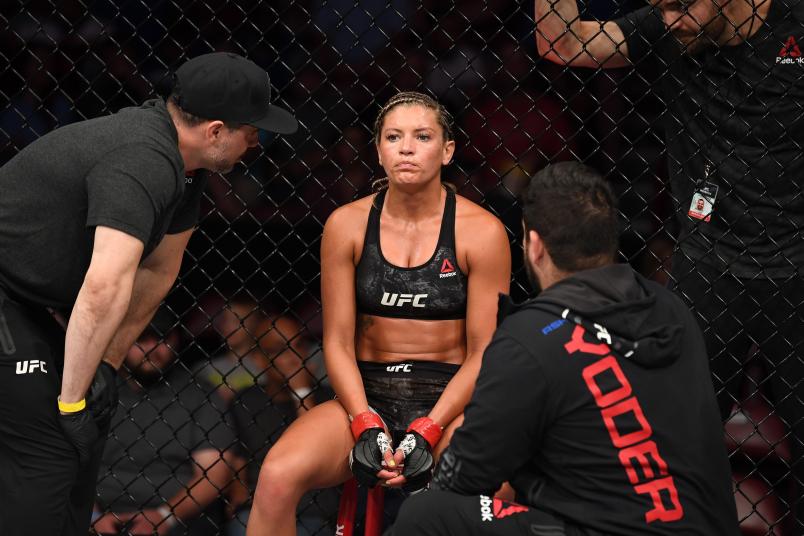 GREENVILLE, SC - JUNE 22: Ashley Yoder rests in her corner between rounds of her women's strawweight bout against Syuri Kondo of Japan during the UFC Fight Night event at Bon Secours Wellness Arena on June 22, 2019 in Greenville, South Carolina. (Photo by

“Sometimes people just need to hear somebody else’s story to give them a little boost in what they’re dealing with, whether it’s a tragedy or some dark space in their mind or their life,” she continues. “I’m glad to be able to do that, and if it’s only helping one person, I feel like I’ve done a lot. I want to encourage people that we can get through some of the darkest times of our lives. We can find a way to change it around.”

Yoder changed her life around, so it’s no surprise that she’s done the same in her fighting career after three UFC losses that put her in a precarious position a year ago when she prepared to face Cooper in Denver. Then again, every fight is an important one in the Octagon.

“You could win your first fight and they can cut you,” Yoder said. “There’s no promise in our job, so the ‘I gotta win the fight’ thing, no matter what anybody says, that’s always in the back of your head, because no matter what, if you don’t come to fight, you might not have a job.”

“It’s exciting,” she said. “At first it was overwhelming. Now, I do pretty well when I get put in hot situations or my back’s against the wall. I just bite down and work through whatever problems I have and try to find a better outcome instead of dwelling on the negative stuff.”

Not bad for a “Dark Goat” who’s hungrier than ever.

“I’m not settling for anything,” said Yoder. “I’m ready to get more.”