Arnold Allen Aims To Outclass Everyone

In The Biggest Fight Of His Career, Arnold Allen Hopes To Become A Featherweight Contender
By Zac Pacleb, on Twitter @ZacPacleb • Mar. 17, 2022

For a while, Arnold Allen was a fighter UFC fans would only see once a year and often in London. Through his first five UFC fights, four took place in England, and he didn’t compete twice in a calendar year until 2019. So, it makes some sense that Allen has snuck under the radar for some while compiling a perfect 8-0 record under the UFC banner, but after outdueling Sodiq Yusuff in April 2021, Allen finally found himself in the featherweight Top 10.

As the UFC touches down in London for the first time in three years, Allen looks back on the same stretch of his career fondly. Last time he fought in the O2 Arena, he was on the prelims, and now, he’s prepped for a co-main event against Dan Hooker in the Kiwi’s return to 145. 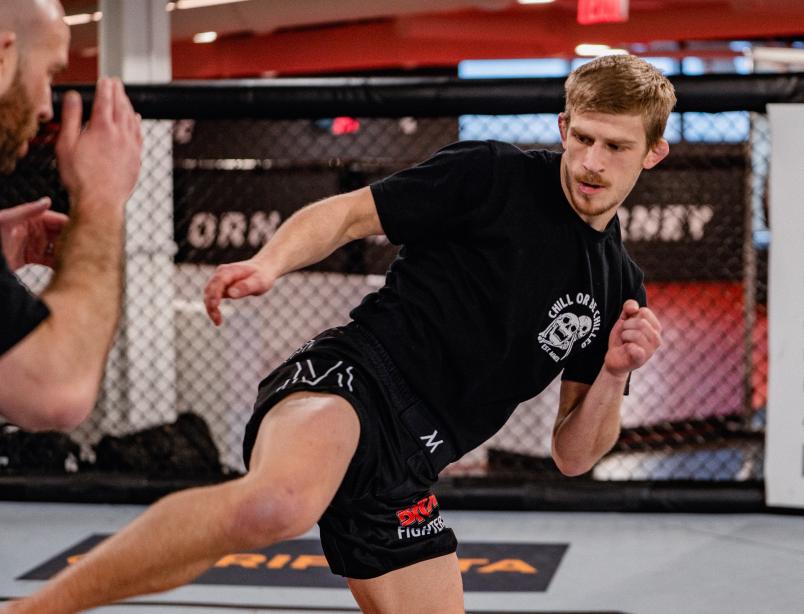 Arnold Allen trains for his bout at UFC Fight Night: Vettori vs Holland in the UFC Performance Institute on April 7, 2021. (Photo by Zac Pacleb)

Arnold Allen trains for his bout at UFC Fight Night: Vettori vs Holland in the UFC Performance Institute on April 7, 2021. (Photo by Zac Pacleb)

Racking up decision wins isn’t the flashiest way to get business done in the Octagon, and it is a slight bugaboo for Allen, who knows he has the power and technique to end fights early. That said, Allen believes clinical performances are just as satisfying as a quick night at the office.

“As fighters, everyone wants to have that fight that everyone looks back and goes, ‘Oh, that fight was crazy,’” he said. “But, for me, to f***ing outskill someone, shut them down, have a complete shutout, I’m pretty happy with that, too.”

If Allen can do that against Hooker, he’ll absolutely catch some eyes and turn some heads. Granted, that’s easier said than done.

Hooker found great success at 155 after splitting his first six fights in the UFC as a featherweight, picking up knockout wins over Ross Pearson, Jim Miller, Gilbert Burns and James Vick. Along the way, he became known for his technical sharpness and eagerness to get into a dogfight, most notably against Paul Felder and Dustin Poirier – a pair of Fight of the Year contenders in 2020. On top of that, he ingratiated himself with fight fans and peers alike for always stepping up and taking on the hardest fights, regardless of the logistic challenges he faced in New Zealand. 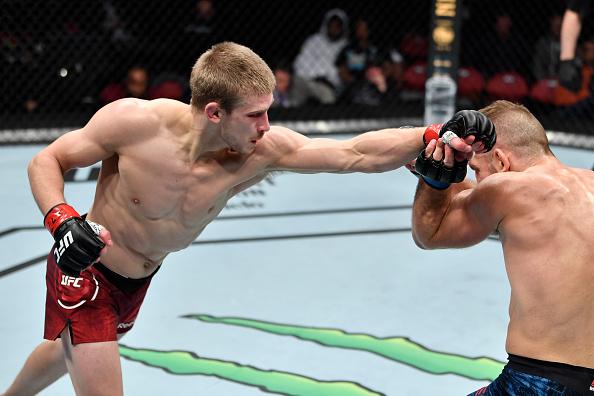 Allen is well-aware of Hooker’s resume, deeming him his “most dangerous” opponent yet. Taking Hooker out might mean going through some fire, but Allen also understands that while Hooker is perceived as a wildman, there’s a high-quality skillset underneath that.

“He’s had some crazy fights, but he’s a technician, too,” Allen said. “He has had some really technical fights where he sort of tried to pick people apart, play games, set traps and all that, but I haven’t had those crazy brawls and fights. It’s something in the arsenal. I just haven’t used it. That’s Plan B. We’ll stick to Plan A and out-technique and out-skill someone. If it goes that way, it goes that way.”

Even though Hooker doesn’t have a place in the featherweight rankings, Allen believes this fight is bigger than that. Hooker is a fighter who was in the thick of the lightweight title picture, which has been the cream of the crop when it comes to contenders.

So while Hooker is hoping to steal Allen’s momentum at 145, Allen hopes he can build his name by taking out someone with Hooker’s pedigree. 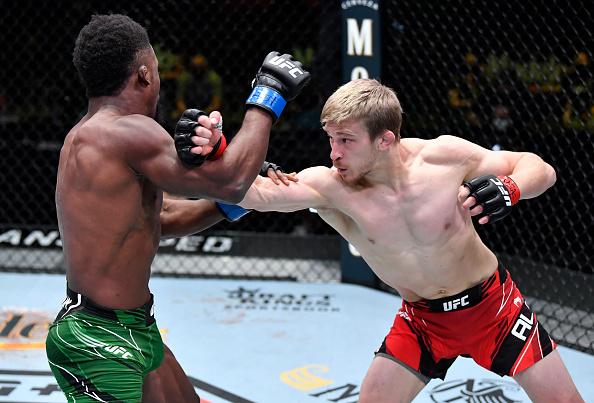 Arnold Allen of England punches Sodiq Yusuff of Nigeria in a featherweight fight during the UFC Fight Night event at UFC APEX on April 10, 2021 in Las Vegas, Nevada. (Photo by Chris Unger/Zuffa LLC)

So, in the brightest spotlight of his career against the biggest name of his career, Allen is keen on delivering the best performance of his career. He’s fully prepared to dig deep and get his hand raised by any means necessary, potentially setting himself up for title contention.

On top of all that, Allen is buzzing to get back in front of an English crowd. Ask any British fighter on the card, and they’ll get starry-eyed about the UFC’s return to London. Allen is no different, and to be in the co-main event makes it all the more special.

“It’s pretty special walking out in the O2 with all the fans,” Allen said. “It’s not the biggest arena the UFC have ever been in, but there’s something about the fans in London. They like a beer. They like a fight. They got the whole combination. Everyone is going wild. There’ll be people in outfits. There’ll be people in the old St. George’s outfit. There’s going to be flags flying around and people screaming. It’s going to be pretty good.”