Four months later, Andrei Arlovski is back. Back in the cage and back in the old world, where he is once again set to headline a European city’s UFC debut. This time: Hamburg, Germany on Saturday, Sept. 3.

Back in May, Arlovski last took over headlining duties for the UFC’s debut in Rotterdam. Things didn’t go too well for him that time with Alistair Overeem earning a TKO win over him early in the second round. It was Arlovski’s second knockout loss in as many fights.

“Let’s (expletive) change the subject,” Arlovski grunts towards the media inside Hamburg’s Barclaycard Arena once the first question regarding his teammate turned opponent comes up. The expression on his face tells you that he means it.
RELATED: Top 5 Media Day Moments | Breakdown: On the Mat - Arlovski vs Barnett | Arlovski featured on Battle Lines | Free Fight: Arlovski vs Bigfoot

All right then, on to the next one. Next up for Arlovski will be fellow veteran and former UFC heavyweight champion Josh Barnett. He, too, lost his last fight, succumbing to Ben Rothwell’s gogo choke back in January. Just as he doesn’t want to talk about his own last fight, though, Arlovski says he won’t even try to draw too many conclusions from his opponent’s latest loss.

“It doesn’t mean anything that he lost to Ben Rothwell,” Arlovski says. He’ll later somewhat revoke that statement, but it doesn’t change the fact that he has a lot of respect for his foe. “He has really good grappling skills and great striking skills as well. He’s tough.”

He is, indeed, and so is Arlovski. Both fighters are former UFC champions with a combined 80 professional fights between them. No matter how good you are, you don’t reach those numbers and accomplishments if you’re not one of the baddest men on the planet. While Arlovski made his debut in 1999, Barnett first stepped foot into the spotlight in 1997. Both of them have fought in the UFC long before Reebok uniforms, women’s divisions and free fights on FOX. Keeping all that in mind, it’s almost a miracle that the two of them never saw each other inside a cage before. 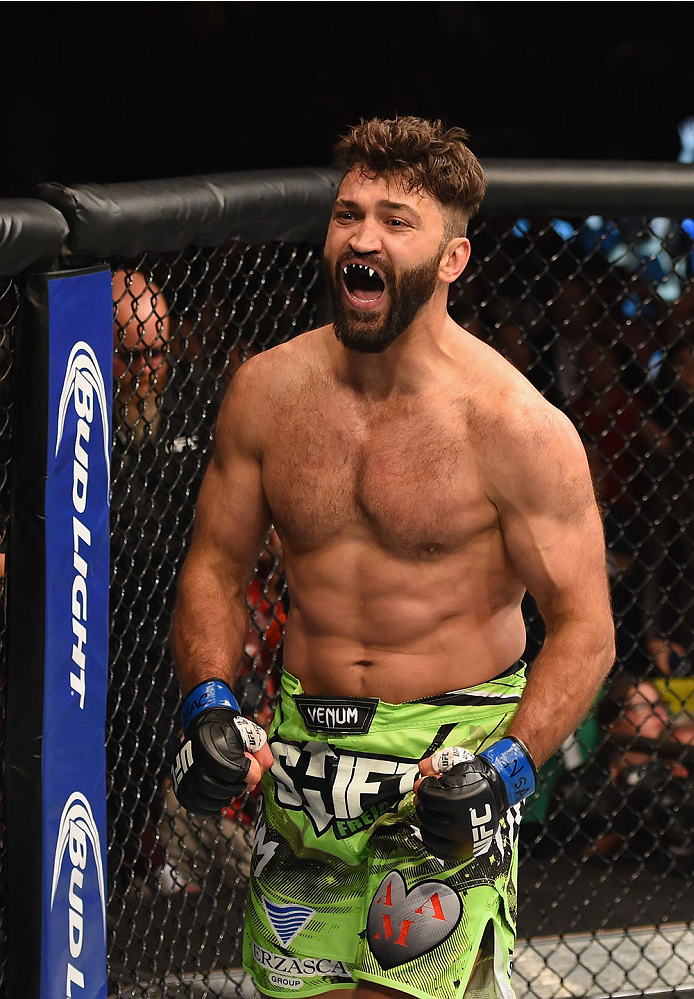 Now, it’s going to happen. Finally – better late than never. And while results have been mixed for both in recent years, Arlovski knows that he might still be in for a rough night in 2016 if he can’t get the veteran out of the cage early. Even if Barnett lasts through the first round, though, Arlovski is confident he’ll be the winner whenever the bout concludes.

“Of course I want to knock him out, because everybody likes knockouts, but if this fight goes the distance, I’m ready for 25 minutes, so I’m in a good shape.”

Barnett has shown that ability to last the full five only last year, when he decisioned gritty knockout puncher Roy Nelson over a draining 25 minutes. Against the first man to ever knock Nelson out, though, Arlovski expects Barnett to come out guns blazing.

Taking Arlovski down isn’t necessarily part of the plan for Barnett if you can take the former champion’s word for it. Barnett believes that since Arlovski has been knocked out nine times in his career, the least strenuous way to win is to score number ten.

Being told that, Arlovski doesn’t seem to be too thrilled about Barnett’s plans – understandably so – but not too concerned either. It does prompt him to finally take a shot at Barnett’s last performance, though.

“Doesn’t matter what he said, it’s that simple. Everybody says he is a great grappler but Ben Rothwell choked him in the second round, so I don’t know. He can say whatever he wants, but the reality is you have to bring all you have inside the Octagon.”

Arlovski might often seem moody, brusque and even passionless at times at these media obligations, but once fight night comes around, you know that he will indeed give it his all inside the Octagon. And whatever has been said going in, at the end of the day, it’s always strictly about getting the job done for Andrei Arlovski.

“Josh Barnett is definitely not my friend, it’s just straight to business,” he says. “No personal issues, just straight business. I don’t have any business with him except Saturday night. This is just another fight for me. Another day in the office.”

That working day might be scheduled for five rounds, but with Arlovski trying to land the final blows of the fight early and him expecting his opponent to try to do the same, the heavyweight headliner might just end up being one of the shortest fights on the whole card.

But even in case his latest assignment does end up lasting just a few short minutes, Arlovski is not about to look past those crucial moments. Not after losing twice in a row, leaving him in limbo within the increasingly competitive UFC heavyweight division and on the verge of dropping out of the ranks of the elite. But even in the middle of a rough patch – don’t count out anyone who owns wins over Frank Mir, Travis Browne, Ben Rothwell and Fabricio Werdum, among 21 others.

“I don’t know if Barnett takes me seriously because I tell you right now I spent a lot of time in the gym and I’m taking this fight really serious and I’m focused.”

So don’t expect him to tell you his plans for after this fight. There are none.

With the prospect of seeing two legends of the sport finally getting the chance to throw down, focusing on that moment in time sounds way more fun than pondering the future anyway.