Arlovski Looking to Make a Run at the Belt 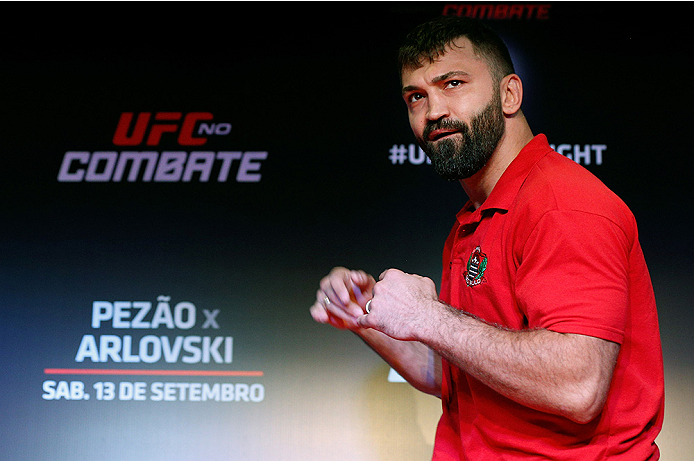 For Andrei Arlovski, Saturday’s UFC Fight Night bout against Antonio “Bigfoot” Silva represents a major opportunity for the former champion to announce to the heavyweight division that “The Pit Bull” is not only back, but back in top form.

“I wasn’t happy with my last fight,” Arlovski said of his UFC 174 split decision win against Brendan Schaub in June.  “But if you look at his face he looked like he got hit by a train. My performance wasn’t the best but a win is always good. I took some lessons and did some homework and I will be a much different fighter against Silva.”

And he will need to be if he wants to win over a hostile crowd in Brasilia, the capitol of Brazil where his foe Silva hails from.

In Bigfoot, Arlovski faces a powerful striker who has already bested the Belarusian under the Strikeforce banner via unanimous decision in 2010. But even though it was just four years ago, the Arlovski who is making his second appearance inside the Octagon since returning to the UFC is vastly different than the one who fought in Strikeforce.

“Before, when I was in the UFC, I may have taken things for granted,” Arlovski says. “But I’m much more responsible now, and maybe that’s why the UFC gave me this chance again. The most important thing to me now is training hard and being a responsible professional. I think at this stage of my career I can still be a champion, and I’m going to work toward that goal. That is the most important thing right now, to move forward.”

An impressive performance against Silva would be a good start. One thing Arlovski is going to try to do is keep this fight on the feet.

“He has good takedowns and submissions, so I have been training my wrestling a lot more for this fight than usual, but I also brought in a boxing coach from Russia who will also be in my corner for this fight, so I’m excited about those lessons as well,” he said. “But I really don’t worry about anyone else. I only worry about myself and getting better in all areas of fighting. I don’t train for specific fighters.”

To his point, there’s no real secret about what Bigfoot will do, as his fight style has remained the same throughout his career, but for Arlovski, winning five of his last six fights gives him a quiet confidence that things will be different this time around, even if he is fighting Silva in his home country of Brazil.

“Of course I’d rather fight in the States,” he says. “But I went to Brazil for a week to do press and I really enjoy the country and the people there are nice. Even though they will cheer for my opponent more in this fight, they still like me over there.”

To Andrei, the fans are the reason he’s still productive in this sport.

“I went through tough times in my career but the fans have always stayed with me,” he said. “I think that’s why I have stayed in this sport so long and maybe why the UFC has given me this second chance. When Dana White tweeted that Andrei Arlovski would be coming back to the UFC, it only took about thirty minutes for my fans to write several hundred well wishes on my Facebook page. Their support means a lot to me, and I always treat them with respect. I never turn down a picture or to sign something for the fans.”

And while Arlovski should have a technical striking advantage over Silva, Bigfoot’s size and power will always be a factor in any fight. However, Arlovski says he’s as prepared as he can be for his chance to avenge a loss.

“Compared to most fighters Bigfoot is a big guy,” he said. “But I train with heavy guys so I’m okay. I gained a little muscle myself so I’m going to be in good shape to fight him.”