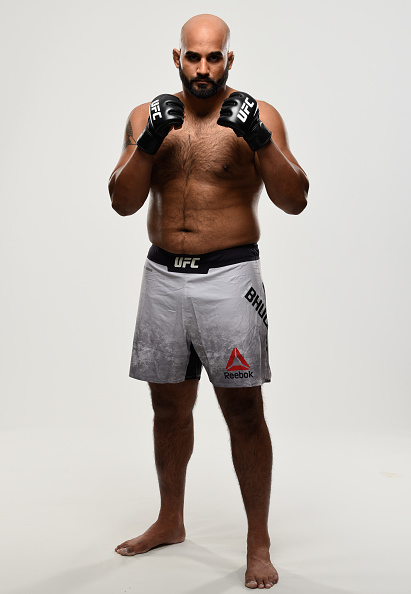 When your wedding, one which shut down roads, makes it on YouTube, you may be kind of a big deal. Arjan Singh Bhullar laughs.

“The family was busy with all the planning and preparation and all that,” he said. “My job was to show up, and I did that.”

It’s a humble response from a humble man, but if all goes well for Bhullar, the first Sikh and Indo-Canadian fighter to compete in the UFC, he may end up being one of the most important figures to strap on the gloves and step into the Octagon as he brings his sport to Indian fans.

“Fighting, everybody understands it, and there’s a history of wrestling there,” he said. “And they know me already. Timing is everything in life and I’m excited to make this a reality for the company and myself and Indians around the world.”

That’s a lot of pressure as he prepares for his UFC debut against Luis Henrique, but as a member of the 2012 Canadian Olympic Freestyle Wrestling team and the son of a decorated wrestler, Avtar Bhullar, the 31-year-old is used to the spotlight.

“Being my dad’s kid in that sport, he had quite the resume, so I always had eyes on me growing up, and I embrace the pressure,” he said. “Transferring over to MMA, I did it for a reason. This isn’t because I didn’t have any other options. This is a conscious choice I made to get under the lights in front of as many eyeballs as possible, so I’m excited for that.”

Bhullar turned pro in 2014, compiling a 6-0 record in the ensuing three years. And while he puts in plenty of time training in his home city of Vancouver, BC, he also makes the trip to the American Kickboxing Academy in California. There, he has been like another former Olympian turned MMA fighter, Daniel Cormier, in going from top dog to low man in the gym as he made the transition from the mat to the cage.

Pre-order UFC 215 now | A few tickets remain for Edmonton, get yours now!

“For sure, when you’re coming from a high level, you’re used to being the guy,” he said. “Then all of a sudden you’re being humbled on a daily basis. But you accept that, and it’s good because what you did in wrestling to get to the top of the mountain, you just duplicate that. It’s the same process of having the right people around you, finding a great support network, and setting goals along the way. I’m a newbie, but obviously I had a wildcard, which was my wrestling.”

Wrestling wasn’t just something he took up on his own or was brought into by his father. That’s in his blood, going all the way back to the Bhullar tribe which was one of four Sikh tribes tasked with leading their people into battle.

“The Sikhs are from Northern India,” he explains. And anyone that invaded India came through the north. From the Mongols and Alexander the Great to the British Empire and the Persian Empire, they were all met by my people, the Sikhs. So we have a warrior’s lineage. We met every invading army for thousands of years. Not only that, but within Sikhism, there’s a history that there were certain tribes that led the people into battle. And out of the four tribes that they always picked to lead people into battle, one was the Bhullar tribe.”

So the die was already cast for Bhullar to make combat a part of his life, but make no mistake about it, this isn’t the only part for him, and the reality that he doesn’t need fighting to survive could make him more dangerous than those who do because he wants to do this.

“The guys that have to do it, look at how much pressure they have on themselves,” he said. “They’ve got their family relying on them and their whole life is that. No one thing I do in my life is tied to my identity. I’m much more than a fighter, much more than a husband and a son. All of those things make up me, and that allows me to be free out there. And it allows me to compete at a high level. Again, coming from a sport like wrestling, that sport is so tough and we don’t get paid for it. Now, the pay is a bonus. (Laughs) It’s a great place to be in.”

The Octagon isn’t a great place to be in for his opponents, though, and he can’t wait to show UFC fans what he brings to the heavyweight division.

“I control the narrative in there,” Bhullar said. “That is my world, my space. I’ve been in the Octagon, I’ve competed several times now, and it’s the same thing I’ve already done, but with more lights and more people watching. But I don’t pay attention to that anyhow. It’s just me and him in there. I love that.”