Greatness is a funny beast. For many, it’s clear that those given that mythical title were gifted with a little something extra on the fastball, an ability to make tacklers miss, or a keen eye that made jump shots automatic.

In combat sports, though, the idea of being born with the talent to defeat an opponent in a ring or Octagon is a little trickier. There are no recruiters seeking a kid on the playground who can win a streetfight in devastating fashion or scholarships awarded to the top student in jiu-jitsu or karate class.

In boxing, kickboxing, wrestling or MMA, greatness is developed in silence, with hard work being the main ingredient of taking an athlete from average to special.

Demetrious Johnson secures an arm bar submission against Ray Borg in their UFC flyweight championship bout during the UFC 216 event inside T-Mobile Arena on October 7, 2017 in Las Vegas, Nevada. (Photo by Jeff Bottari/Zuffa LLC)" align="right" />Demetrious Johnson was a good athlete in high school, good enough to just miss out on two State wrestling titles, but what future was there for a 5-foot-3 wrestler who was good, but not elite on the mat? He started college, but eventually prizefighting was going to be his path.

But just like wrestlers, 5-foot-3 prizefighters rarely get the attention they deserve. So while Johnson’s early career saw him run through his first ten opponents and become a cult favorite of sorts thanks to his work with “The Wizard,” Matt Hume, no one knew the fighter he would become, and that fighter worked long shifts in a warehouse in Tacoma to make ends meet.

Johnson’s boss there, Pete Bohockey, watched as Johnson showed up to work, did his job, then ran to the gym before fighting on the weekends. This lasted into Johnson’s run in the WEC, where he rebounded from a loss to Brad Pickett to defeat Nick Pace and Damacio Page. Once the UFC called and Johnson scored victories over Kid Yamamoto and Miguel Angel Torres, he took the leap to full-time fighter. That leap came with a good-natured threat from Bohockey.

“My boss, I love the guy to death and he supported me,” Johnson told me before his 2013 win over John Moraga. “I was working for him even when I was an amateur. I would say, ‘Hey, I need to go fight this weekend, so can I get Friday off to cut weight? And then I fight Saturday, so I’ll be back to work on Monday.’ He would go ‘absolutely.’ He was a huge fan of mixed martial arts, and I remember when I would go fight in WEC, I would ask for a whole week off, and he’d give me time off then as well. He always told me that he would fire me if I chose work over fighting. He just believed in me.”

Fight fans believed in Johnson as well, and while he lost his first UFC title shot to Dominick Cruz in 2011, the UFC’s decision to create the flyweight division in the promotion gave “Mighty Mouse” the platform he needed.

The rest is history. Johnson defeated Joseph Benavidez in an instant classic in September 2012 to become the UFC’s first 125-pound champion, and he hasn’t stopped winning yet, nearly cleaning out a division in which he has already scored eight victories over seven of the top 15.

But it’s how he’s won that takes him from the status of good champion to all-time great. The three fighters who have given him the most trouble at 125 pounds – Benavidez, Ian McCall and John Dodson – were all figured out and defeated more decisively in rematches. And in a division dismissed by some for not producing more knockouts or submissions, Johnson has finished seven of his 11 successful title defenses, with seven of those bouts earning him post-fight bonuses as well.

We can also look at the performances of the fighters he defeated AFTER he beat them to display just how good Johnson must be to defeat opponents who have gone on to career-best efforts like Benavidez, Henry Cejudo and most recently, Moraga. This is not Wladimir Klitschko dominating a weak era in heavyweight boxing, but a special fighter who is simply a step ahead of quality opposition.

And through it all, Johnson maintains a level of professionalism that is pointed out only because it’s so rare in all of sports these days. He’s a father and husband, an athlete who shows up to the gym to get better and outwork everyone else, and someone who’s only vice may be video games. And while he is well aware of his place in the history of his sport, he’s not looking outward for anything to motivate himself to get out of bed in the morning. 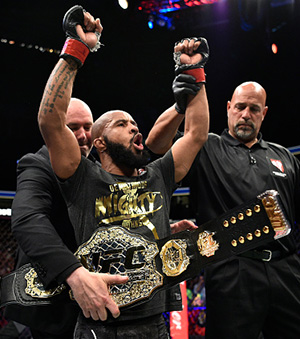 “I’m a self-motivator,” he told me before the Tim Elliott fight last December. “I’m not out there searching for motivation or what’s going to give me that fire underneath my ass to get out there and fight again. I just like working out, I love learning, I love competing and this is my job and what I do for my family. This is how I bring in the bread.”

No one has done it better in the history of the UFC. And the scary part is that he’s only 31 years old and seemingly getting better. His secret? Taking nothing for granted.

“I became a champion, but you still have to stay humble because I know if I lose my next few fights, things could change drastically,” he said in 2013. “So I stay humble, I train hard, and I know that there could be a day when I end up back at a 9 to 5 job, but I keep telling myself that I’m gonna train my butt off so I don’t have to go back to that and I can keep on providing the things I need to keep a roof over my family’s head. You have to stay humble. You see it all the time with professional athletes; they make all this money over their career and the next thing you know, they’re dead broke. I don’t want to end up on that list. So I try to stay smart, live within my means, keep training, and I approach every fight like it’s a fight.”