Antonio Silva - Today is the Only Thing That Matters

"I'm very happy for the opportunity and for the trust UFC has in me. I'm going to do my best, be sure of that." - Antonio Silva 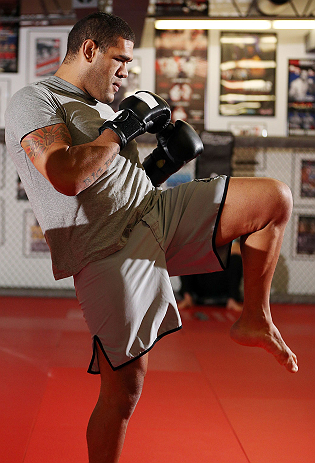 When discussing the UFC on FX main event between Antonio “Bigfoot” Silva and Travis Browne, toss away any talk of Silva’s recent losses to Daniel Cormier and Cain Velasquez.

It’s the way things have to be for a fighter if he’s ever going to move forward in the dog eat dog MMA world, and in the UFC’s heavyweight division, multiply the need for a short memory tenfold. And while the Brazilian is in the midst of the first two-fight losing streak of his career heading into Friday night’s bout, previous defeats to Eric Pele (in 2006) and Fabricio Werdum (in 2009) have only served to fuel him.

“I’ve been able to come back with a lot of training and with the support of my family and my true friends,” said Silva when asked about his resilience. “It's essential to trust good professionals; they're a big part in being able to come back stronger and better.”

The loss to Pele kicked off a six fight win streak that included wins over UFC vets Cabbage Correira and Justin Eilers, and former UFC heavyweight champ Ricco Rodriguez. After losing to Werdum, he beat a couple more standouts in Andrei Arlovski and Fedor Emelianenko.

So after getting knocked out in the first round by Cormier in the semifinals of the Strikeforce Heavyweight Grand Prix in September of last year, hopes were high in the Bigfoot camp that he was going to bounce back in his UFC debut in May with a win over another former heavyweight champ in Velasquez.

It didn’t happen, as Velasquez got Silva to the mat early, cut him, and forced a stoppage 3:36 into the opening round, ending the 33-year-old’s first Octagon bout before it really even got started.

“I was very upset, but it's part of the fight and it was just Cain's day,” said the gracious Silva. “Now what's important is Browne.”

See, short memory. And in Browne, who Silva describes as a “very tall guy, fast and a good striker,” he can gain back any momentum he lost with a big win in a UFC main event. Just getting that headlining gig alone proves that the organization believes he still has plenty to offer.

“I'm very happy for the opportunity and for the trust UFC has in me,” he said. “I'm going to do my best, be sure of that.”

But in giving up height, speed, and perhaps punching power advantages to his opponent, how will Silva break his slide before it turns from two to three? The first option is his black belt level ground game, but many believe Silva’s greatest strength on fight night will be his huge advantage in experience. Bigfoot agrees that having that experience is nice, but when you ask him what will be the difference, he says it will come down to who fights the more perfect fight.

“Experience is important, but this time I don't want to make a mistake,” he said. “At the level that we are in today, the one who makes the least mistakes wins.”

Now that’s experience talking, and while Silva only made it to 7-0 as a pro mixed martial artist before suffering his first loss, he saw enough time with a perfect slate to know that it isn’t how you start, it’s how you finish.

Doesn’t sound like a guy with a two-fight losing streak. No, Antonio Silva sounds like a guy who has every intention of starting a winning streak in Minnesota.

“My fans will see an Antonio Silva that is fighting to win,” he said. “I think this fight will be a war, and I'm going to give my best.”