Antonio Silva: Comeback of the Year 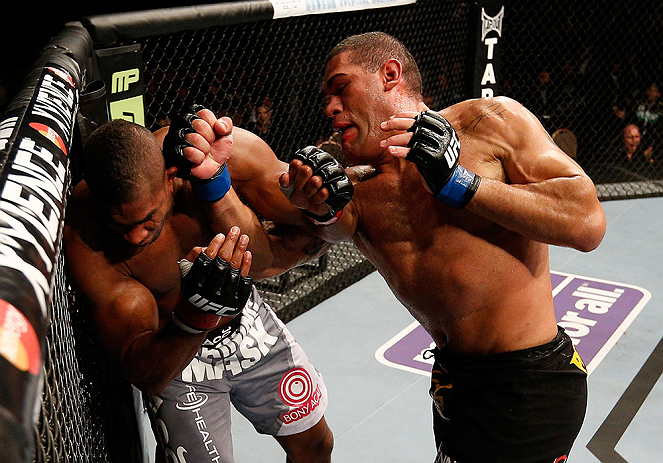 Before what most consider to be the biggest fight of his life, Antonio “Bigfoot” Silva is remarkably calm. That’s what happens when you’ve presumably hit bottom in your career, destined to be a gatekeeper or, even worse, a journeyman propped up for hot prospects to feast on.

That’s the state of sports these days. One loss is bad. Two is catastrophic. Two in a row? Even worse. So if you asked anyone in the mixed martial arts world if Silva was going to be getting a shot at the UFC heavyweight title just a year after getting stopped in a single round by Cain Velasquez, a loss that followed a 2011 defeat to Daniel Cormier, you would have been checked into the local asylum for merely suggesting it.

Put bluntly, Silva, just 32, was written off. He didn’t see the fight as the end though. A pro since 2005, he had seen enough to know that as a heavyweight in MMA, you’re never truly finished. So he didn’t fire back at the doubters, didn’t give any ammo to future opponents. He knew the score.

“The heavyweight division is a division where anything can happen,” said Silva through translator Ana Claudia Guedes during a recent media teleconference. “One punch lands and the fight is over. So you really have to be careful what you say. You could be surprised by the results of the fight. Respect is always first and foremost. Before the fight, after the fight, you have to respect your opponent.”

Less than five months after the loss to Velasquez, Silva made his return, presumably as the sacrificial lamb for unbeaten young gun Travis Browne. Silva stopped Browne in less than a round. Next up, in February of this year, was Alistair Overeem, and there was no shortage of bad blood between the two former Strikeforce standouts. Silva won again, knocking “The Reem” out in the third round.

“Bigfoot” Silva wasn’t a stepping stone on his way out the door anymore. He was the number one contender for the UFC heavyweight title, with a date against Velasquez (who regained the title with a December win over Junior dos Santos) this Saturday in the main event of UFC 160 in Las Vegas. Is he the underdog to the man who defeated him a year ago? Absolutely. But don’t think that bothers Silva, considering that he not only beat the odds in his last two fights, but also did the same in his Strikeforce victories over Fedor Emelianenko and Andrei Arlovski.

“I like when people underestimate me, it’s nice,” he said. “I get to go out there and I get to prove them wrong. There are no superheroes in this sport, and nobody is invincible. I’ve been putting in a lot of hard work for the last nine weeks, I have been preparing myself and I’m very confident that I’m going to have my arm raised on May 25.”

So what changes on Saturday night? In the first bout, Velasquez put Silva on his back and fired off ground strikes that bloodied the Brazilian and forced a stoppage 3:36 into the opening round. Velasquez didn’t look any less imposing in his win over dos Santos last December.

“A lot of my preparation has been the same as it was for the first fight,” said Silva. “Obviously in the first fight I made a big mistake. But there were a lot of things that I did right going into that fight and that unfortunately you guys didn’t get to see. So much of that has been maintained and overall the main strategy is just not to let his elbows get near my forehead. That would be the change.”

It’s a bit of levity before a very serious encounter, and the 33-year-old Brasilia native believes that ability to relax may also play into his favor the second time around.

“I think the main thing is in our first fight I was nervous and I was anxious,” he admits. “And I have replaced those emotions now. Now I’m calm and I’m driven, and I really want this.”

And he knows that he isn’t going to beat Velasquez at his own game. He’s not faster than the Californian and he isn’t going to outwrestle the former Arizona State University standout. But standing at 6-foot-4, and weighing close to the heavyweight limit of 265 pounds, he will have the size advantage over the champion, and with a black belt in jiu-jitsu as well as 14 wins by knockout, he’s got some tools of his own to implement once the opening bell rings.

“Comparing my style of fighting to Cain’s style of fighting, I would have to be born again to become faster than Cain Velasquez,” he said. “But I’ve got 30 pounds on him. He’s going to be faster than me, so I need to work with what I have and what I have are very, very heavy hands. I’m going to need to keep my hands healthy and heavy to go in there and I’m sure that the first punch that I really land he’s going to go down. I have a lot of respect for Cain Velasquez, I think he is an incredible fighter, and I respect him as a person. But I’m very confident in myself and I feel very good going into this fight.”

It’s a cliché, but saying ‘what a difference a year makes’ certainly applies to the career of Antonio Silva. So what will May of 2014 hold for “Bigfoot?” It’s probably safe to assume that we should expect the unexpected.