Antonio Carvalho: Right Where He Belongs 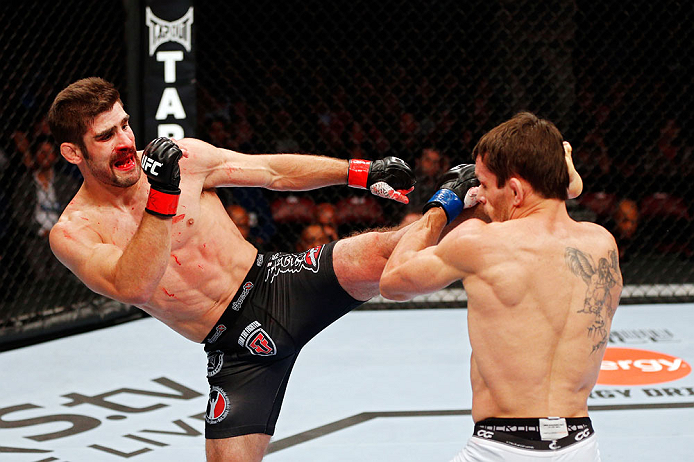 Fighting in Montreal is becoming a regular occurrence for Antonio Carvalho.

This weekend, the 33-year-old veteran will make his second consecutive trip to Canada’s second largest city to face off with Darren Elkins at the Bell Centre as part of the televised preliminary card for UFC 158. Four months earlier, the Canadian featherweight earned his second consecutive victory in the UFC in the same building, taking the nod in a hard-fought three rounder with Rodrigo Damm at UFC 154.

Like many Canadian fighters, Carvalho made trips to Montreal in the early stages of his career as well, earning the third and fourth wins of his career. Eventually, he would depart for Japan, and go on to establish himself as one of the top featherweights in the world while facing off with the likes of “Lion” Takeshi Inoue, Jeff Curran, Rumina Sato, and Hatsu Hioki.

But between his early appearances and his two most recent visits came arguably his most important fight in the City of Montreal.

After back-to-back losses to Hiroyuki Takeya and Yuji Hoshino in Japan, injuries and overall exhaustion led the Ontario native to hang up his gloves and walk away from the sport. Less than two years after the loss to Hoshimo, he was back in the cage and back in Montreal, ready to make one last go of things.

Three years later, Carvalho is once again in Montreal, but instead of taking on Eddie Fyvie at the Pierre Charbonneau Centre, he’s stepping into the Octagon on the biggest stage in the sport, squaring off with an opponent on a four-fight winning streak.

“The goal when I came back was to make it to the UFC, and we accomplished that,” said Carvalho, who trains and teaches at Bruckmann Martial Arts in Oshawa, Ontario. “I’m very happy I’ve gotten to this point – I’ve surpassed everything I ever thought I was going to accomplish in this sport – so I’m trying to do my best to enjoy myself. Sometimes I’m a bit hard on myself, but I have to remember this is what I love to do. I have to constantly be reminded of why I’m doing this in the first place, and it’s because I love to compete and I love to fight.”

While many view making it to the big leagues as a sign that “you’ve made it,” the Canadian pioneer who made a name for himself under the Shooto banner sees it a little differently.

“Most people think you make it to the UFC, all of a sudden you’ve made it, but you’ve got to make it in the UFC as well. That’s what I’m finding out now, and it’s a lot of hard work.

“It’s hard to distinguish yourself in an organization with hundreds of fighters – great fighters; the best on the planet – and you’re just trying to find your spot in there,” continued the engaging 15-5 featherweight competitor. “I still think I’m trying to find my spot in the UFC. I go from losing my first fight to having a great second fight, and then I had a fairly lackluster third fight. Next thing you know, people forget or they don’t care anymore, and that’s just the way it is. You’ve got to keep impressing people, and that’s difficult. It’s hard to be consistent.”

After coming up short in his UFC debut about Felipe Arantes, Carvalho collected the first UFC win of his career in exciting fashion, knocking out Daniel Pineda in just 71 seconds at UFC 149 in Calgary. He says he pressed too hard at UFC 154, trying to replicate that performance when he faced Damm last year in Montreal, and came up short, although he did come away with the win.

Carvalho will once again look to bring his best efforts to the cage at UFC 158 when he squares off with Elkins, an underrated and “under the radar” competitor who has quietly amassed four straight wins since dropping down to featherweight.

With the featherweight division gaining increasing exposure with each card, and the landscape of the division shifting as more fighters from the lightweight division move south on the scale, the man known as “Pato” knows that this is a pivotal fight in his push to establish himself as a potential contender in the increasingly deep and dangerous 145-pound ranks.

“When his name came up,” began Carvalho, “I said yes right away for two reasons: (1) I think he’s a quality opponent, and (2) he is on a winning streak, and I knew that. I follow all the other guys in the division, so I know exactly what’s going on, and who’s who, and for me, I think he’s going to be a huge test. This is the kind of fighter that I believe I have to be able to perform against in order to move forward, and I think it’s the same for him. I need to do something impressive, and so does he.

“I guess you could call us both “dark horses” in the division, and we’re both trying to find that one moment to impress people in order to move forward. I was a little surprised they offered him to me in a sense because he is on a four-fight winning streak, and I feel he’s a bit further ahead than I am in that sense.

“I know he’s the favorite over me at this point in time,” added Carvalho. “I also know what kind of fighter and person Darren Elkins is and that he doesn’t take anybody lightly. He’s been under the radar, beating very good quality opponents unexpectedly. He faltered out of the gate, but he learned from it, and has put together a win streak, so I think he’s definitely not taking me lightly either. It’s going to be a difficult fight.”

At this level, though, every fight is difficult, which makes little things like getting to compete on Canadian soil for a third consecutive event a nice bonus and added motivation for the Canadian veteran.

“I’m happy the UFC is booking me in Canada. I wasn’t expecting them to book me in Canada again, and they booked me for a third time, which hopefully means I’m doing something right,” laughed Carvalho, who has gone 10-0 for his career fighting in his home country.

“It’s very helpful for me in general. I don’t have to deal with taxes or travelling too far. I’m five minutes from the VIA Rail, and then four hours later I’m in Montreal, right next to the venue, right next to the hotel. It facilitates things for me, and everyone can come out and enjoy UFC week, so I’m very grateful for that for sure.

“I never thought I would get this many chances to perform in front of my friends and family, so I enjoy it because I feel like everyone is a part of it. At the end of the day – win, lose, or draw – they’re always there for me, and I’m glad that we’re all taking this ride together.”

More than 10 years after his career started, and nearly three years since he stepped back into the cage in Montreal after his brief retirement, Carvalho is right back where he’s always been – competing alongside the best featherweights in the world.

“It’s funny because it has been three years, but some days it feels a lot longer,” said Carvalho in closing. “Like I told you earlier, I’ve surpassed every expectation I’ve ever had for myself. I’m sometimes still shocked that I’m amongst the best fighters in the world. I’m still star-struck when I see certain people, but I really am amongst them. I do feel like I belong.”

He does belong. He always has.