"I’m definitely going to enjoy every moment that I have in the UFC and
do the best that I can, put on the best fights, and leave everything
I’ve got out there." Antonio Carvalho 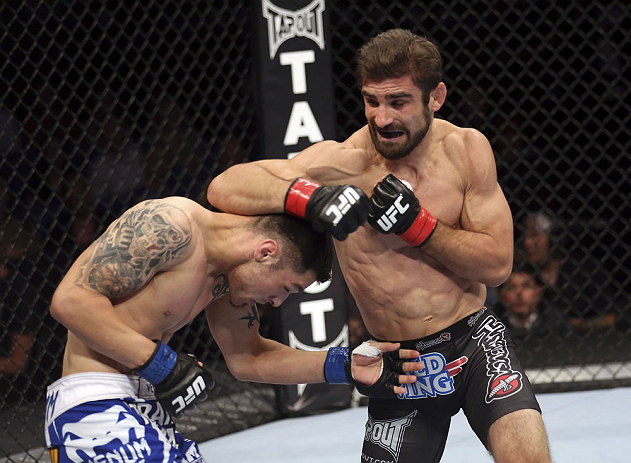 In a literal and figurative sense, Antonio Carvalho had fought the good fight. A pro since 2002, the native of Sault Ste. Marie, Ontario was a top featherweight before the UFC had the weight class among its ranks and before the WEC basically introduced the 145-pounders on a wide scale to a North American audience.

But his biggest fights were in Japan, so when he told some of his students that the odds of him ever getting a chance to compete in the UFC once it began putting on shows in Canada were slim, he wasn’t giving a Doomsday prediction; he was just telling it the way he saw it.

Well, 2012 may be the end of the world according to the Mayan calendar, but it turned into the start of something big for Carvalho, who not only made his long-awaited Octagon debut in January, but also competed in his native country in July. So what do you want first, the good news or the bad news?

The bad is that he lost his debut at UFC 142 in Brazil, dropping a competitive decision to Felipe Arantes. The good? He secured his first UFC win six months later in Calgary, and he did it with a knockout of steel-chinned prospect Daniel Pineda that took just 71 seconds.

Now that’s a homecoming. And he was glad that what he told his students all those years ago turned out to be a pretty poor prediction.

“I guess I was wrong on that one,” he laughs. “That’s why it was a very emotional time for me when I did get that first win because it was all of that coming together at that one moment and it was just so overwhelming and I finally got to show Canada that I was a solid fighter and all the time and effort that I put in certainly paid off.”

It was the perfect way for the 33-year-old to pick up his first UFC victory, as he secured his immediate future in the Octagon, and did it in highlight reel fashion. But as he knows, he has to now move on and get ready for a UFC 154 bout with TUF Brazil veteran Rodrigo Damm.

“That was about as perfect as I could get,” said Carvalho of the Pineda win. “That’s the hard thing, letting that one go because it felt so good and it was such a moment, and everything, from leading up to the fight to during and after, it was such an experience that you want to live on that high for so long. But I’ve got to remember that it was just a moment. It was a great one for me for sure, but I gotta come back to Earth and realize that I have a very tough guy ahead of me and I have to deal with that and forget about that July fight in Calgary and just focus on Rodrigo.”

That shouldn’t be a problem for the 14-5 veteran, who has been around this game long enough to know just what buttons to push – and when – to get himself ready for fight night. At least that’s what he thought heading into his Octagon debut against Arantes.

“When I walked in I think I underestimated the whole situation,” he admits. “I had been in the game for so long I just kinda looked at it as ‘okay, it’s a fight, even if it’s the biggest show in the world,’ but when I got out there, I’m not gonna say that got to me because I just felt like that night I wasn’t the better man and it’s that simple, and that’s what created me for the next fight basically and I learned from that experience. But yeah, that first fight is a difficult one, and I think that’s why the UFC always gives guys a second chance to prove themselves and I was able to do that. I think I proved my worth as far as being a tough competitor (against Arantes). I lost but I think I put up a good fight and the UFC then gave me the chance to fight at home, which was fantastic, and at this point I’m willing to pretty much go anywhere and fight.”

With two UFC fights in the books, Carvalho now looks ahead to Damm, who, like the Canadian, has paid his dues over the years before getting his big break in 2012. For the Brazilian, that break was a spot on TUF Brazil, where he made it to the semifinals before getting pulled from the competition due to injury. Once healthy, Damm made a big impression at UFC 147 in June, winning Submission of the Night honors for a finish of Anistavio Medeiros. Carvalho has done his homework on his upcoming foe.

“He’s had some tough fights and he’s been there with tough guys, and he’s proven his worth as far as being a tough competitor,” he said of Damm. “And some of his wins are pretty impressive too. I always liked him because he came out of the Japan circuit just like me and he was always a great Brazilian Jiu-Jitsu practitioner on top of that, so it was very interesting to see him go to the UFC, and I was actually quite happy when he got on the show.”

You don’t hear a comment like that too often in combat sports, but among the more seasoned veterans of MMA, guys who competed before there were reality shows, major network deals, and UFC events around the globe, there is camaraderie and a high level of respect.

“I’ve seen a couple different generations of the division, so it’s nice to go through those, and I’m still in there,” said Carvalho. “There are a couple of us still in there, and it’s always nice to see those guys if they’re on the same card or just there with another fighter, and you always get the nod. (Laughs) We’re the old dogs out there, we get it, and it’s a very cool vibe.”

It’s odd to hear a young man of 33 refer to himself as an “old dog,” but it’s easy to understand where he’s coming from. Carvalho has put plenty of years into this sport, and he knows that he can’t do it forever. He even declared as much when he got signed, writing on his official UFC bio form, “This will be my last chance to prove to myself that I am an elite featherweight. The UFC has given me my chance. This next step in my fighting career is about leaving whatever I have left in the cage once and for all.”

Two fights later, and with another on the way this weekend, he’s in good shape career-wise, but when it’s time to walk away, he’ll know it.

“When the time comes, I’m ready to walk into the sunset and call it,” he said. “If I’m not putting pressure on myself to try to compete at the highest level, then for me at this point in time, after being in it for 10 years, it’s just not alluring to me anymore. I love the sport, but if I can’t compete at the highest level anymore, then maybe it is time for me to move on and hopefully help other guys get there as well. The second phase of my career will eventually be to help other guys just be better than me and get further than I ever could. And that’s what I want to do. I see so many young guys that I have that are just so damn good already that I can’t wait to see them in there. The evolution is so much quicker now, and I really want to see what these guys will be capable of.”

But hey, it’s nice to know he’s still got it, right?

“I needed to answer those questions in the last fight whether I still could fight,” he said. “So hopefully I still got some fight left in me.”

He certainly does, and while he’s still able to scrap with the best in the Octagon, he’s going to enjoy every second of the experience.

“Sometimes my girlfriend needs to point that out to me,” laughs Carvalho. “You can get a little miserable when you’re training, and you start to forget that ultimately, we’re supposed to be out there having fun. But my mind has changed big time in the last few years, and I’m trying to enjoy every moment when I’m out there because at some point maybe I won’t be in there anymore. So I’m definitely going to enjoy every moment that I have in the UFC and do the best that I can, put on the best fights, and leave everything I’ve got out there, and that’s hopefully how I’m going to end my career as well.”