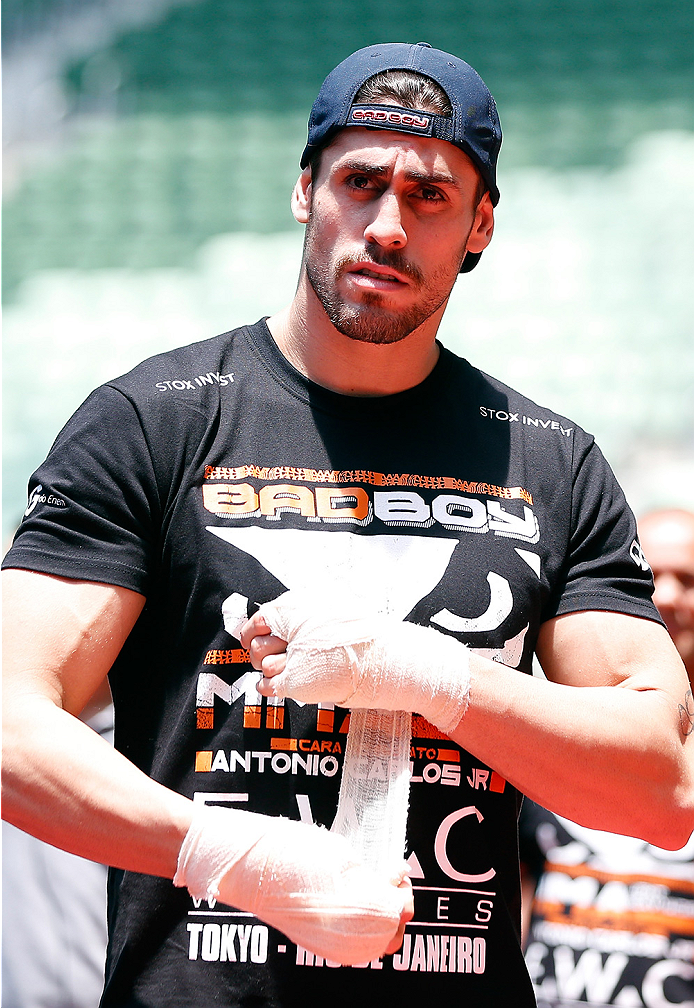 A little youthful rebellion never hurt anybody. In fact, Antonio Carlos Junior turned it into a career.

“My father said go to study but my choice was to fight,” he laughs, days away from his second UFC fight, and first since winning The Ultimate Fighter Brazil 3 in May. To call his 2014 campaign a life-changer might be understating things a bit, as he went from a respected world jiu-jitsu champion and budding mixed martial artist to one of the top young fighters in the game. And according to the 24-year-old from Rio de Janeiro, he owes it all to TUF.

“It’s been really good,” he said of life since defeating Vitor Miranda for the show’s heavyweight title. “I was a beginner before, with just three fights, but now after TUF I feel more confident.”

Three consecutive finishes on the show over Guilherme Viana, Edgard Castaldelli and Marcos Rogerio de Lima (all in the first round) will do wonders for any fighter’s confidence, and even though he was forced the full three round distance against Miranda, that was a key in his development, both mentally and physically.

Following the bout, Carlos Junior returned to his optimum weight class of light heavyweight, a wise move considering that he only fought at 213 pounds as a heavyweight.

“I’ve always been a light heavyweight,” he said. “TUF was a different situation. I’m too light for heavyweight.”

And here we thought it was just because he didn’t want to eventually meet up with his friend and training partner, former UFC heavyweight champion Junior Dos Santos.

“We train together, so I know he’s really tough,” Carlos Junior laughs. “I don’t want to see him in front of me in the Octagon.”

Anyone else though, that’s fair game, and this week it will be fellow 205-pound prospect Patrick Cummins. After a highly-publicized UFC debut on short notice against Daniel Cormier that went sour in a hurry, Cummins has put together two consecutive wins, and he’s looking for three on Saturday in Barueri.

“He’s a very tough guy, he’s a two-time All-American wrestler,” Carlos Junior said of his opponent. “He looks like a nice guy as well, and I expect to have a good fight. He’s tough, but I just want to reach my goal.”

That goal is to achieve the same kind of accolades he won on the mat, as a World, Brazilian, and Pan Am games champion. In Brazil, that’s a big deal, and it’s why there are high hopes for the unbeaten “Cara de Sapato” in his home country. I asked him about the similarities between competing in a high-level, high-pressure jiu-jitsu tournament and fighting in the Octagon. He said “It’s almost the same. One thing that’s better (in MMA) than in jiu-jitsu is that it’s just one fight. In a jiu-jitsu tournament I can have seven fights in a day and you don’t know who you’re going to fight. Now I know who I’m going to fight and I can prepare physically and mentally for that one fight. So I think it’s a little better.”

Better for him, worse for the one who has his undivided attention on fight night. If it makes Cummins feel any better, Carlos Junior admits that “I’m always a little bit nervous when I go fight,” but those butterflies all go away once the bell rings and it’s showtime.

As for his father’s current opinion on the direction he took in life, Carlos Junior says “He didn’t want me to fight, but now he supports me and he’s more relaxed about it.”

“He watches the fight after the fight,” he laughs.