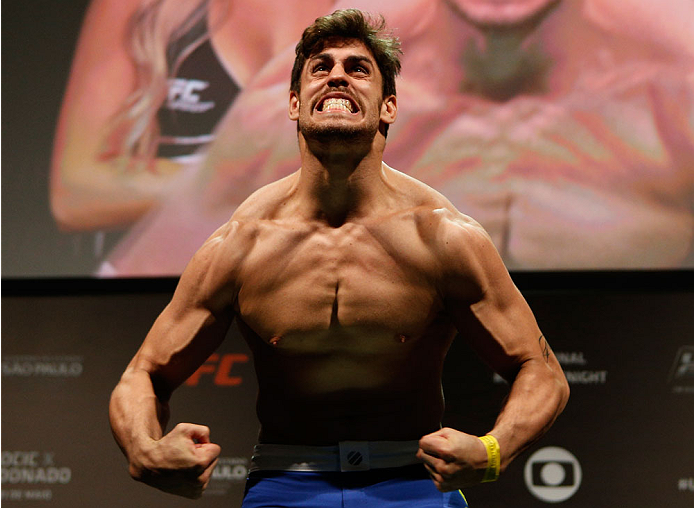 They say anything can happen inside the Octagon, and sometimes that includes an 11-second no contest via accidental eye poke.

Would the two physically imposing middleweights battle on the feet? Or would the two test each other’s vaunted ground game on the floor?

In the end, neither happened as an errant eye poke brought a close to the bout that had only just begun.

“I was a little frustrated with the fight since I didn't expect that as the outcome of it,” Carlos said. “I believe it was disappointing for him as much as it was for me.”

One silver lining is that the former heavyweight grappling ace known as “Cara de Sapato” had another full training camp and another successful cut to his newest fighting weight of 185 pounds. At UFC Fight Night: Machida vs. Romero in June, Carlos made an excellent debut as a middleweight with his third-round rear naked choke of TUF 19 winner Eddie Gordon. The Casey bout was simply more experience in the gym earned for Carlos in a sport that he only turned pro in about three years ago.

“The cut is very easy,” he said. “I've been trying to be as dedicated and focused with the diet and training regimen as I can, so this cut becomes easier and easier. I think I got better overall in all aspects of the game. I am a very young fighter in MMA and I've been trying to develop all my abilities. I wanted to show that evolution in the Casey fight. But it's OK, I can show it now against Dan Kelly.”

Up next, Cara de Sapato will travel into “enemy territory” at UFC Fight Night: Hunt vs. Mir to tangle with four-time Australian Olympic judoka Dan Kelly. A cast member of TUF Nations: Canada vs. Australia, Kelly has gone 3-1 inside the Octagon, with his most recent bout being a unanimous decision victory over Steve Montgomery at UFC 193. It’s an interesting matchup pitting Kelly’s judo against Carlos’ jiu-jitsu on the other side of the planet from where Carlos lives currently, but in a place where Carlos is actually quite familiar.

“Kelly is an experienced judo player but, like me, he doesn't have a whole lot of MMA fights,” Carlos said. “We both come from grappling backgrounds, but I think if he uses his judo skills, he will land in my world, where I'm more comfortable. I think it is amazing to travel and see new places; I love it. The only setback is when it's a long trip, you are obviously dieting, so the flights are not that fun. Australia is a long trip, but I absolutely love it there. I lived in Australia for a while and have amazing memories and I hope to leave here with even better ones this time. I also have a lot of friends in Australia that will be here supporting me. So even though they won't be as much as Kelly's crowd, they will be sending me good energy.”

In preparation for Kelly, the 26-year-old native of Joao Pessoa, Brazil is busy training at his new home base in south Florida at the world-renowned American Top Team gym. The 6-1, 1 NC pro is learning how to use his 75-inch reach and his impressive BJJ black belt under Helder Medeiros inside the Octagon, as he works with some of the best coaches against some of the best training partners.

“I’m always training and evolving with my coaches Marcos ‘Parrumpa’ DaMatta, Katel Kubis, King Mo Lawal and Everton Bittar,” he said. “And, of course, with the help of my amazing training partners such as Steve Mocco, Thiago ‘Marreta,’ Junior Dos Santos and Hector Lombard. I live in Florida now. After my fights, I go back home and spend some quality time with my family, friends and my girlfriend. But right away I go back to ATT to continue my journey. It's a good thing that I bring good competition experience from another sport, and I'm glad I adapted very well to this new sport.”

On March 19 (March 20 in Australia) at UFC Fight Night: Hunt vs. Mir in Brisbane, two highly credentialed ground specialists will collide, as Carlos takes on Kelly.

“With both of us coming from a grappling background, it's safe to say it will be a very technical ground affair,” Carlos said. “They can expect a more mature and complete fighter in me, that's for sure.”