Antonina Shevchenko may be facing a familiar opponent on Saturday, but her preparation for the fight remains unchanged
By Jon Gagnon • May. 29, 2020

At first thought it seems like a huge advantage. Shevchenko and her younger sibling constantly train together and now she access to all the things Valentina picked up from her bout with Chookagian. It will also be the second time Shevchenko has studied Chookagian.

But Shevchenko isn’t looking at this fight differently than any other. She understands that her sister is a different fighter and it would be foolish to look past the No. 2-ranked flyweight just because of some pre-fight tactical advantages.

“There is no big difference whether Valentina fought her or not,” Shevchenko said. “We study her technique, how she fights. We did it before when Valentina fought her. But that’s one fight and this is two different opponents. It was the same preparation as any another opponent.” 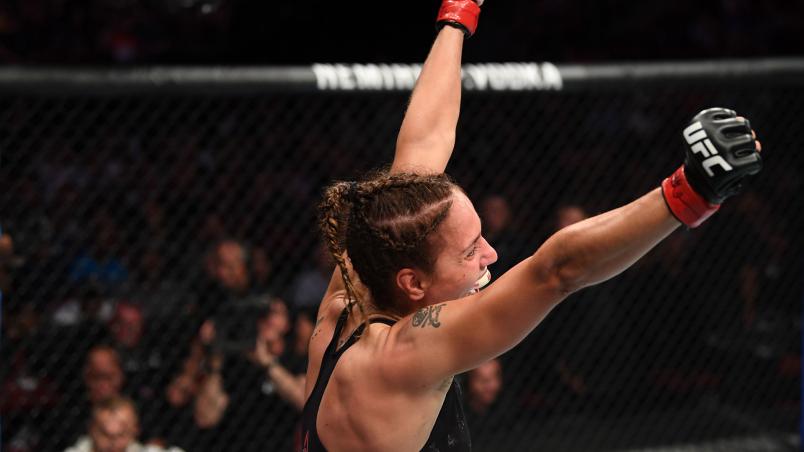 NEWARK, NJ - AUGUST 03: Antonina Shevchenko of Kyrgyzstan celebrates her submission victory over Lucie Pudilova of Czech Republic in their women's flyweight bout during the UFC Fight Night event at the Prudential Center on August 3, 2019 in Newark, New Je

If that mentality isn’t proof of a focused fighter, then look no further than Shevchenko’s previous bout against Lucie Pudilova last August.

Fresh off her first UFC loss, Shevchenko’s talking point during fight week in Newark was to make sure she erased the memory of that defeat. Losing two fights in a row can you put in a hole that’s tough to dig out of if you have title aspirations. Shevchenko wouldn’t allow herself to go down the road.

She responded by submitting Pudilova with a rear naked choke that earned a Fight of the Night performance bonus, and it was the first time Pudilova had been finished in the UFC.

“Not just getting the submission, but the victory was important for me because after you lose a fight you go crazy about winning another fight,” Shevchenko said. “I was preparing very well and, of course, I’m happy with my performance.”

The victory put Shevchenko back on her desired path, the one she was on before she had ever lost a fight. Now, at 8-1 and ranked as the No. 12 flyweight in the world, Shevchenko faces her biggest test in Chookagian. Fortunately for Shevchenko, she’s had no shortage of preparation.

She was originally supposed to fight Cynthia Calvillo on April 25 before the event was cancelled. So during these unusually crazy times when a lot of fighters are accepting short-notice fights, Shevchenko has been training for months.

“For this fight I had a long training camp because I was preparing for the event on April 25,” Shevchenko. “But with all the gyms closed we had to find places outdoors. First, we traveled to Phoenix. Then the gym closed. So we found places near lakes and mountains so I know many places in Phoenix and Las Vegas.”

What could be the end result of all this training and preparation? Shevchenko thinks it’s an opportunity to move closer to the title. How could a win over the No. 2 contender not?

Of course, there’s an obvious bump in the road were Shevchenko to become worthy of a title shot. Her sister is the champion of the division and they won’t be fighting each other.

“I think so, yes,” Shevchenko said about being in the title conversation with a win on Saturday. “(Chookagian) is number two. Of course, my sister is the champion and I will not fight her, but if she, for example, moves on to the 135-pound division, then I will be in position.”

Shevchenko points to the possibility of Valentina moving to bantamweight to fight Amanda Nunes. The rumors and hopes of a third bout between Valentina and Nunes have escalated even further after Valentina’s dominant performance against Chookagian.

But for now, Chookagian is exactly where Shevchenko’s focus will remain.

“Every fight is very important, but this is a big fight.”