Antonina Shevchenko is right where she belongs, in the UFC with her sister 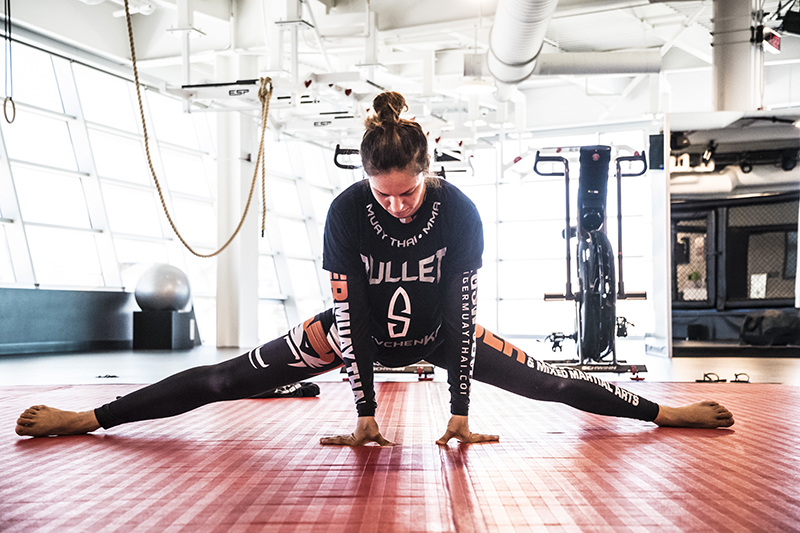 As a 3rd Dan black belt in Taekwondo and the president of the Kyrgyzstan Muay Thai Federation, Elena Shevchenko had no hesitation starting her daughters, Antonina and Valentina, in martial arts as youngsters. But more than two decades later, she probably couldn’t have imagined that she would have not one, but both daughters on the UFC roster.

So it was a pretty special day on June 26 when Antonina stopped Jaimee Nievera in two rounds on Dana White’s Tuesday Night Contender Series and earned a UFC contract, joining Valentina – the number one flyweight contender – on the promotion’s roster.

“She's very happy to know that I won the fight in the Contender Series and to know that I got a UFC contract,” said Antonina. “She now has both her daughters in the UFC, fighting at the best level of mixed martial arts in the world. She said she's proud of us.”

It was almost inevitable that the Shevchenko sisters would get to this point as soon as they both transitioned from Muay Thai to MMA.

First, it was Valentina, who made her Octagon debut in 2015 and quickly established herself as an elite bantamweight, nearly taking the title from Amanda Nunes last September. Then it was off to flyweight for “Bullet,” who earned a September shot at Nicco Montano’s flyweight crown after submitting Priscila Cachoeira in February.

In June, it was Antonina’s turn, and as she improved her pro MMA record to 6-0 with the TKO of Nievera, she had a feeling it was going to be a family reunion in the UFC.

“I got a finish in the second round, so I was pretty sure about getting the contract,” she said.

Yet there was little time for celebration in the Shevchenko camp, as Valentina has a title fight to get ready for, meaning Antonina is right by her little sister’s side. And given that fact, Shevchenko was more than willing to jump in for a fight in Dallas that night.

It wouldn’t be the first time they’ve competed on the same card.

The FIRST pair of sisters in the UFC!

Congrats on getting a contract, @AntoninaPantera! pic.twitter.com/ZSNyEH1gkh
— UFC (@ufc) June 27, 2018

And while some siblings find it difficult to fight on the same card, that’s never been an issue for Team Shevchenko.

With seemingly endless Muay Thai titles between them, it was probably a good night for the sisters more often than not. That’s what happens when you mix talent, determination, experience and a love of the game together. And for Antonina, the love may be the key ingredient in this stew.

“Martial arts is my whole life,” she said. “It's what I love, it's my passion, it's everything for me. I started to train when I was seven years old, and I'm more than 20 years in it. I cannot imagine my life without it. As a professional fighter, I want to do it as long as I can. And when I won't be a professional fighter, my life will still be in martial arts in some different way.

“Of course, if you have the love for something, you will be good in it,” Shevchenko continues. “This thing that you love, you will spend all your time with it, and you will get better and better with more time in it. And martial arts is the same. And it's everything about martial arts. It's not only fighting and training, it's everything, because of martial arts you have different, interesting travels, and in these travels you meet different, interesting people. You also see how they live and what traditions they have.”

“La Pantera” has seen a lot in her 33 years, but now she’s going to see even more as a UFC fighter. But will she miss Muay Thai?

“I will still be training my standup, of course, but I will not be competing,” she said. “I love Muay Thai and this style very much and I fought a lot in it, but I think UFC is the next step and the next big challenge for me, and it's very interesting also. Mixed martial arts is the most complete and most efficient style in all martial arts. That's why I will be doing it full-time. There is a lot of stuff to train and practice to evolve my technique, so I think I will be busy and it will be a joy to fight in MMA.”

Ready to fight as soon as possible, Shevchenko is another exciting addition to the growing women’s flyweight class, but considering that her sister could very well be the champion of that division should she beat Montano next month, it has to be asked what Antonina’s initial goals are in the UFC.

“The goal is the belt,” she said without hesitation. “I want to be the champion in this organization. It's a difficult path, but I will do everything and do my best to get the belt. This is the main goal for all fighters that fight in the UFC.”

It is, but most don’t have a sibling competing for the same prize. What happens if Valentina is champion and Antonina is closing in on a title shot? Will Antonina move to bantamweight or strawweight, or will Valentina return to 135 pounds?

“For me, this weight is a good weight division, it's perfect,” she said. “So now, when I climb into the number one position, I think I will be in this weight class. And after, we will see. I don't know how things will happen when I get close to the belt. (Laughs) My little sister is already close to being the champion and I'm the big sister, but I'm just entering the UFC.”

In other words, these ultra-close sisters will cross that bridge when they get to it.