Antonina Shevchenko is ready to make her statement in the Octagon this weekend, coming on the heels of her sister Valentina’s successful title defense against Lauren Murphy at UFC 266. Being able to have fights so close together has led to another rewarding training camp for the pair, including Valentina getting some extra snacks.

“I like to have training camp together with my sister because nobody is distracted,” Shevchenko said. “Everybody has the same mindset, and the schedule is the same. My sister doesn’t diet like I do, because sometimes she’s just eating chocolates during training camp. But the mindset is the same. The energy at home is the same. Everybody is focused.”

The 36-year-old is full steam ahead in her flyweight matchup with emerging talent Casey O’Neill at UFC Fight Night: Santos vs Walker. Shevchenko wants to show that she is a better fighter than she was in her previous fight with Andrea Lee at UFC 262, where she was submitted via armbar.

Shevchenko isn’t fazed by the hype that is surrounding O’Neill, who steps into the Octagon with a perfect 7-0 pro record that includes finishes of Shana Dobson and Lara Procópio in her first two UFC bouts.

“She’s definitely a motivated fighter and has two victories in the UFC, that’s what brought her more motivation,” Shevchenko said. “She’s all about making a statement or something like that. You can understand her mindset and everything else, but I don’t care about her, I care about me. I’m a fighter who is motivated to get a victory after having a loss.”

For a brief period, the two trained at Tiger Muay Thai; however, they didn’t practice together much.

“It was probably a couple practices that we did together,” Shevchenko said. “It was more exercises. We didn’t do any real sparring to try each other. I was training with my coach, and she was training with other coaches at Tiger Muay Thai. We were at the same time there, we saw each other. I cannot say I know her as a fighter.” 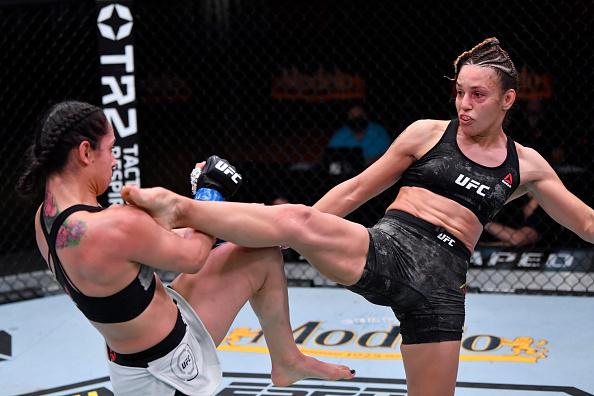 Antonina Shevchenko of Kyrgyzstan kicks Ariane Lipski of Brazil in their women's flyweight bout during the UFC 255 event at UFC APEX on November 21, 2020 in Las Vegas, Nevada. (Photo by Jeff Bottari/Zuffa LLC)

The Kyrgyzstan native made her MMA debut in 2002 and earned three wins before leaving the sport for 12 years. During the twelve-year span, she competed in 40 kickboxing and Muay Thai fights.

Even though she was successful in those events, Shevchenko realized that wasn’t what she wanted to do. She valued that MMA was a sport where she could further develop herself as a fighter.

“You have to be excellent everywhere, like Valentina says,” Shevchenko said. “You have to be a good boxer, good striker, good kicks, wrestling, everything else. I understand I have to close all the holes in my game so my opponent can’t take advantage of this. Valentina doesn’t have holes in her game, so she can win at any level. I’m trying to better my style in MMA. This experience, from all the fights, makes me a better fighter.” 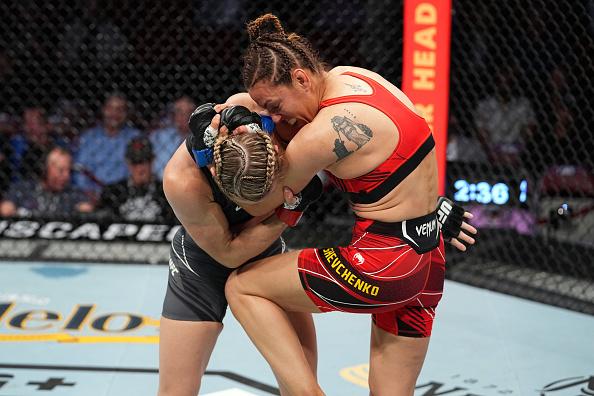 Antonina Shevchenko of Kyrgyzstan lands a knee to the body of Andrea Lee in their women's flyweight bout during the UFC 262 event at Toyota Center on May 15, 2021 in Houston, Texas. (Photo by Josh Hedges/Zuffa LLC)

The experience she brings into this bout is something she believes will lead to her hand getting raised at the end of the night.

“I think in this fight, of course she will have her strategy. It’s not just for me, but for almost all her fights, just taking down opponents and trying to grapple, get the submission and everything else,” Shevchenko said. “With me, it will be the same, but I’m sure that I am a better fighter. I have more technique. I am stronger than her…and that will help me to beat her.”

When she thinks about her post-flight plans, Shevchenko thinks of the thing she has been missing the most through training camp: flying. Even though she hasn’t flown in eight weeks, she has still been able to make trips to the airport. 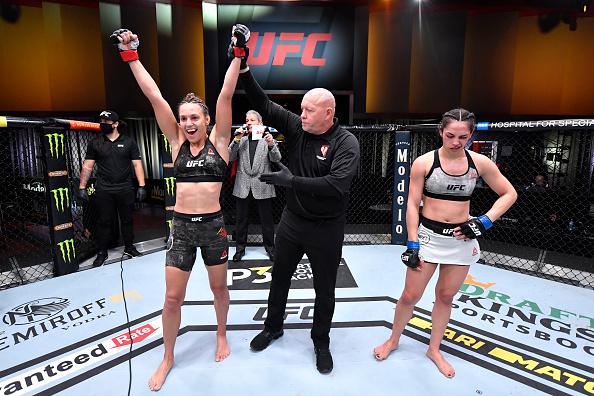 Antonina Shevchenko of Kyrgyzstan celebrates her TKO victory over Ariane Lipski of Brazil in their women's flyweight bout during the UFC 255 event at UFC APEX on November 21, 2020 in Las Vegas, Nevada. (Photo by Jeff Bottari/Zuffa LLC)

“Flying is not like driving,” Shevchenko explained. “Flying you have to prepare, you have to check the weather, you have to prepare mentally to speak with the controllers, not missing anything. I didn’t want to do it because I was tired from training. But on Sundays I would just go to the airport, and I would walk between the airplanes. Just walking between them and watching people taking off and landing.”

Needless to say, Shevchenko is looking forward to the flights, vacations, and good food she’ll be able to enjoy with her younger sister after Saturday.