Anthony Smith: Shooting for the Unforgettable

"I feel confident that if you watch me fight once, you'll never forget who I am." - Anthony Smith 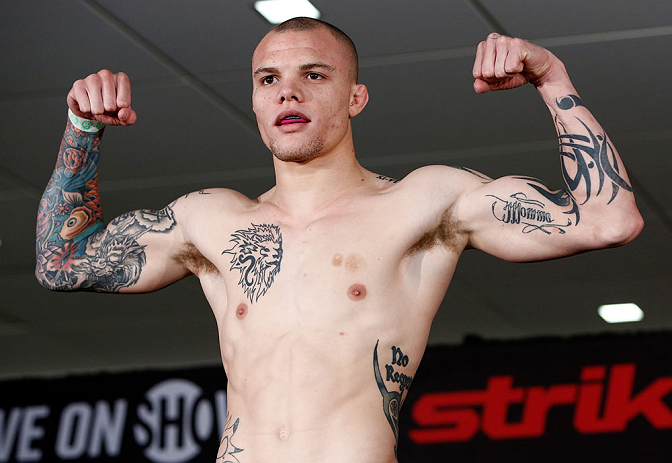 It wasn’t that long ago that the 24-year-old’s goal was to be a professional fighter. Following that, he had his sights set on signing with a major MMA organization and he accomplished that in 2011 with Strikeforce. From there, Smith hoped to make the transition to fighting inside the Octagon, which is about to happen soon enough on June 8th. And, for this debut, Smith’s next goal specifically involves UFC President Dana White.

“If Dana tweeted something good about my fight - I'd be happy,” states Smith. “I would be ecstatic.”

In the wild world of the UFC, a “company man” is a fighter who steps inside the Octagon like they own it and spends every second in there proving it. With that said, a middleweight who has yet to hear a decision read in his 25 scraps is a more than welcome addition to the roster. As with all the former Strikeforce fighters, Smith wants to separate himself from the rest of the pack early and triumphantly to impress the new bosses. The first to do so was lightweight Bobby Green with his Submission of the Night over Jacob Volkmann at UFC 156 and “Lionheart” wants to follow that example to a similar thunderous ovation from White.

“[Bobby Green] went out there and rocked it and Dana loved it,” tells Smith. “That's the reaction that I want to get from my bosses. That's what I'm looking for. I want them and all the fans to be like, 'Holy [expletive]! That was awesome!' I want Dana walking up to me in the back with a check in his hand saying, 'You've earned this.' The three people I'm worried about impressing the most - they're not fans, they're not coaches, they're not my family - it's my bosses: Dana White, [UFC owner] Lorenzo Fertitta, and [UFC matchmaker] Joe Silva. If I can get their attention and a W behind it, I'll be completely happy.”

While this may strike the uninformed as too lofty of an ambition, it’s about par for the course for a competitor who is coming off a fight with a man most believe is the greatest Brazilian jiu-jitsu practitioner in the world: Roger Gracie. At the final Strikeforce event in January, Smith had made up his mind and asked to take on one of his division’s best in Gracie, who was previously 3-1 in Strikeforce with wins over UFC veterans Keith Jardine, Trevor Prangley, and former UFC heavyweight champion Kevin Randleman.

Although Smith was a heavy underdog in most critics’ eyes, it wasn’t until an accidental eye poke that turned the tide for Gracie. “I think the fight was going exactly as I had planned until the eye poke in the second round,” says Smith, who controlled the first round by keeping the fight standing and picked apart the dangerous Gracie. “I'm truthfully really not disappointed in my performance because I did what I could with what I had. He's obviously the best jiu-jitsu practitioner on the planet and I knew I would be in trouble if he got into a dominant position on the ground. I know in that first round when I was 100%, I showed I was capable to hang with some of the best in the world and I just want to move forward and prove that I belong there.”

Besides wanting to battle one of the best middleweights he could, “Lionheart” had an ulterior motive for choosing Gracie: a fan-friendly fight. “I knew that the Gracie fight would have that ability and there weren't many other guys in the division who were free and can give me that opportunity for an exciting fight,” explains Smith, who originally fell in love with the sport after getting thrashed in his first tangle. The thrill of being in a slobberknocker outweighs adding a boring W to his record, which is what everyone wants to hear most. And Smith believes he can bring the fireworks no matter who is locked in the Octagon with him.

“Win, lose, or draw - I want it to be a barnburner,” affirms Smith. “I can kind of coax fights out of people. I can make an exciting fight happen with almost anybody. I don't even care if I'm on the wrong end of a beating, I'm okay with that as long as it is exciting. I can take a beating and still turn it around and finish a fight. I don't want to be in boring fights. If it's not a little bit exciting then there is no point for me to be in there. I'm not in this to grind out decisions or just get a win. I'm here to fight. That's how I want to be remembered. If I never become a world champion and I wind up being a gatekeeper for the rest of my UFC career, I'm okay with that as long as people say, 'That dude fights!'”

Smith’s first shot at fighting fame inside the Octagon is against a fellow first-timer in Antonio Braga Neto at UFC on Fuel TV in Fortaleza, Brazil. “Why wouldn't I want to fight two world champions at jiu-jitsu in a row,” jokes Smith, who admittedly wasn’t familiar with his 8-1, 1 NC opponent, but his BJJ coaches certainly were. At 25 years old and as a highly regarded BJJ black belt under Robert “Gordo” Correa, Neto is a multiple-time gold medalist at the Pan Jiu-Jitsu and World Championships as well as undefeated in MMA when in his home country. Nevertheless, “Lionheart” believes the lessons learned battling Gracie will pay off when squaring off against Neto.

“I think I fought the best jiu-jitsu practitioner on the planet and anything other than fighting Roger Gracie's jiu-jitsu is an upgrade for me,” affirms Smith. “Both of my jiu-jitsu coaches know [Neto] pretty well and they're both confident that even if this was a straight jiu-jitsu match that I would come out on top. If the UFC and all the fans don't think I won't go in there and shoot a takedown on Braga just to prove I'll be fine - I totally will. You would be crazy to think I won't just shoot, take him down, pass his guard, and then let him up just to prove I can. I hope people are not basing this fight off of my fight with Roger Gracie because he's not Roger Gracie. My jiu-jitsu is really good. You don't normally see that because most of my fights stay standing. It's not that I don't want to go to the ground, I just enjoy punching people in the face a lot more.”

In preparation for his UFC debut, Smith stuck around his home of Omaha, Nebraska to get the quality training he needs from the slate of coaches at Premier Combat Center. Smith’s head coach is one half of the gym’s owner/operator tandem and UFC veteran Ryan Jensen. For striking, Smith is tutored by the other half of that tandem in the world-traveled former kickboxing and karate champion Kurt Podany. For the ground, he shares the mats with grappling greats Scott Morton, Felipe Diniz, and teammate John Hansen. Lastly, Smith’s strength and conditioning coach also doubles as a life coach in Riley Ross, who has served a huge role in helping him get to the organization that he has always dreamed of competing for.

“It wasn't that I always knew I was going to make it to the UFC,” explains Smith. “I'm proud enough to say I didn't know if I was going to make it. But I knew I wasn't going to stop trying. I think that's what helps me overcome those hardships and some of those losses. It's a super surreal feeling. I had to fill out my visa application for this fight in Brazil and I had to type in my employer and it was a really surreal feeling typing in 'Zuffa LLC' and then 'Ultimate Fighting Championship'. I took a picture of it and sent it to my friend and said, 'how crazy is that?' I did it, but I don't want to be happy with it. If I get comfortable with just making it then that will take away from my ultimate goal of working towards that world championship.”

On June 8th at UFC on Fuel TV 10 in Fortaleza, Brazil, middleweights will collide when Smith looks to serve up a highlight reel win for the fighting faithful and his bosses alike. “I want fans, Dana, Lorenzo, and Joe to have that holy [expletive] moment from my fight,” declares Smith, whose goal should earn “Lionheart” a Fight Night bonus and turn a lot of heads in the arena, around the world, and in the middleweight division. “The fans will be happy regardless, so I feel like I'm going there to fight in front of Dana and Lorenzo and Joe Silva. I want one of those dudes to shake my hand and say, ‘That was awesome.' I feel confident that if you watch me fight once, you'll never forget who I am.”