Light Heavyweight Knows What Needs To Get Done Wednesday In Florida
By Thomas Gerbasi, on Twitter: @TGerbasi • May. 12, 2020

To most fighters, getting to a UFC main event is a bucket list item. Anthony Smith has been here before, several times to be exact. But what happens when you get that main event in the middle of a worldwide pandemic where at least you’ll get to fight and get paid, but do so in front of an empty arena?

“This won't be the first time that I'll be fighting in front of nobody,” Smith says before throwing the punchline down the middle. “And that was in venues that were selling tickets.”

He laughs, more than fine with fighting fellow light heavyweight contender Glover Teixeira Wednesday night at the VyStar Veterans Memorial Arena in Jacksonville with no fans in attendance.

Did I mention the fight is on a Wednesday? “Lionheart” has more jokes. 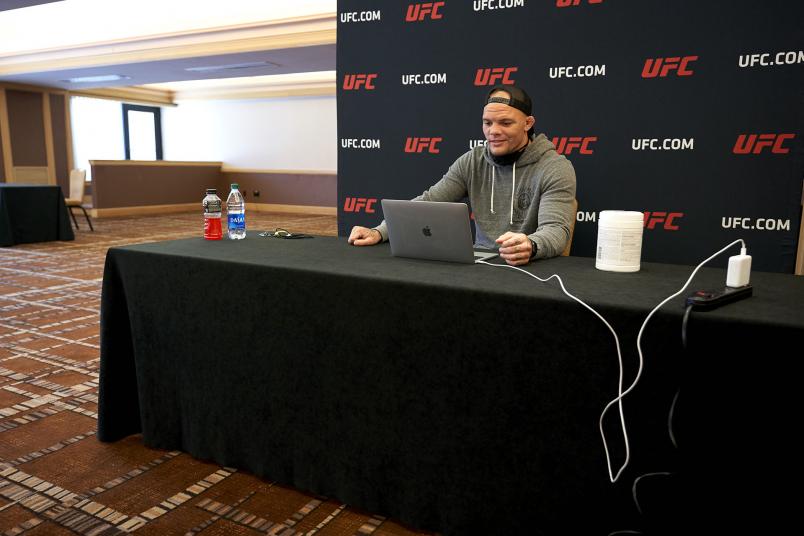 Anthony Smith visits with the media during the UFC Fight Night: Smith vs. Teixeira Virtual Media Day at the Hyatt Regency Jacksonville Riverfront on May 11, 2020 in Jacksonville, Florida. (Photo by Cooper Neill/Zuffa LLC)

If the 31-year-old sounds relaxed before this fight, that would be accurate. He knows how tough Teixeira is, but at this point in his career, Smith knows what he can do on fight night and he knows how to get the job done when the pressure’s on. Having 46 professional fights and a host of amateur bouts will give you that peace of mind. In fact, if it wasn’t such a dirty word in the fight business, the Nebraskan wouldn’t be offended with the word “journeyman” to be used next to guys like himself – true, blue collar fighters who have learned their craft and now display it as professionals of the highest order.

“I've done construction my whole life and if you're a journeyman, you're the high guy on the totem pole,” Smith said. “You're the one that everyone respects because you have all the experience and you know what you're doing. And then you come into this game and you get called 'Journeyman George,' and people on Instagram and Twitter saying, 'Oh, you're just a journeyman.' In my world, a journeyman's the guy that walks in the gym and everyone makes a big deal about because that's the guy that gets all the respect.”

But that’s not how it goes in the fight game. In the fight game, “journeyman” is an insult. In boxing, it’s the guy fed to the hot prospects to lose. In MMA, it’s the fighter destined to live in the purgatory of the middle of the pack, the one who will never get that push to the next level. Smith knows how that feels, as he was in that purgatory just a few years ago.

Back then, Smith was known as a good, solid fighter who always put on exciting bouts but who never was able to get to the next level. There was the 5-6 start to his pro career, two wins in Strikeforce that got him a 2013 call to the UFC, where he lost two straight and was cut. He built a solid run that got him called back to the Octagon in 2016, but after a win over Leonardo Leleco and a loss to Cezar Ferreira, he was almost back where he began – in No Man’s Land.

That was a scary place to be for a young man who had all the hallmarks to be a star in the sport.

Smith knew changes had to be made, and fast. He closed out 2016 with a Performance of the Night stoppage of Elvis Mutapcic, then began 2017 as a member of the Factory X squad in Colorado. What resulted were knockout wins over Andrew Sanchez and Hector Lombard, then came a short notice call to face Thiago Santos in Brazil in February 2018. He took the fight, lost it, but got a Fight of the Night bonus in the process, as well as a lesson he would never forget.

“I didn't have the energy to fight the way I was supposed to fight,” said Smith, whose days of sweating down to 185 pounds were over. “And it wasn't just physical energy. I didn't have the mental capacity to cut that kind of weight and to put my body through that and to go into the fight and be able to slow it down and actually use my damn brain. It was one of the worst nights of my life the night before. The fight was awful too, but the night before was a hundred times worse than the actual fight.”

For his light heavyweight debut in June 2018, Smith would have former world champion Rashad Evans. He ended the fight in 53 seconds. Now people were starting to pay attention and starting to leave the “J” word at the door, but they really took notice when a short notice fight with another former champion in Mauricio “Shogun” Rua a little over a month later turned into an 89-second victory for Smith.

“I think once I beat Shogun, that was when things really started changing for me personally as far as where I land in the company,” he said. “I think a lot of guys get those opportunities and they just don't take them. There's not a lot of people standing in line to fight Shogun on eight days' notice. And I knew that going in. I was one of those mid-level guys that was never gonna get pushed over the hump and then I finally got the opportunity and I knew going into that fight that this is it. This isn't even about this win, this is about showing up, getting the W, getting the finish. Everybody says they’ll fight anyone at anytime. But you gotta show up when they call, and then you gotta actually perform. And I think that's what did it for me.”

You could say the rest is history, but that would mean Smith is about to ride off into the sunset of his career. And that’s certainly not the case, especially coming off a Performance of the Night finish of Alexander Gustafsson that kept him in the hunt for a rematch with champion Jon Jones, who decisioned Smith in their March 2019 title fight.

“It just reiterated what I already knew,” he said of his win over “The Mauler” in Stockholm. “I knew that I was good enough. I know that I'm good enough to beat Jon Jones. The fight (with Jones) went the way that it went, but I knew that I was better than that and I know that I'm better than that and I just didn't get the opportunity to show it. (Against Gustafsson) I was really at a point where I didn't even care if I won, I just wanted to go in there and perform. And I was angry. That's how I trained, I had no game plan, I had no idea what I was gonna do, I was just gonna go in there and fight him. And I was able to go in there and prove myself right.”

It wasn’t the first time, either. Anthony Smith just needed somebody to call his name.