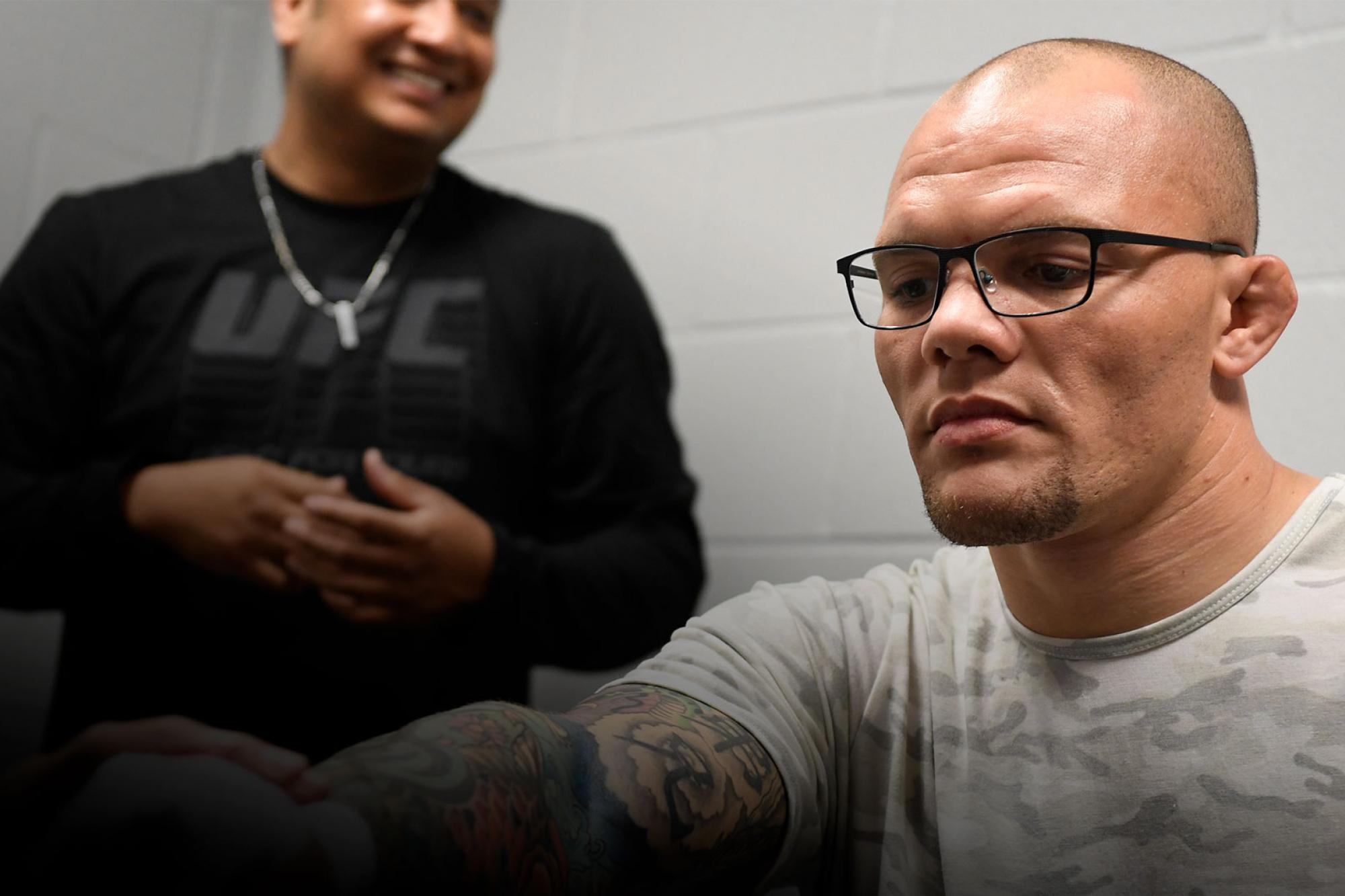 Anthony Smith Doesn’t Give Up

Anthony Smith showed how he earned his nickname “Lionheart” when he put everything on the line his last fight out against Glover Teixeira.
By Thomas Gerbasi, on Twitter: @TGerbasi • Aug. 27, 2020

Anthony Smith will make a heck of a lawyer one day.

How else do you explain the light heavyweight contender taking a situation where the almost universal reaction was one criticizing him and his team for their decision to continue in his May bout against Glover Teixeira, and explain it to where it not only makes perfect sense, but where one can side with his choice that night in Florida?

“I'm not trying to change your mind,” Smith laughs. “I'm just trying to get you inside my head for a minute.”

It’s a fascinating place, first off. Smith is one of the rare fighters who has crossed the bridge between the old school and the new breed, emerging from a rough fistic upbringing to not only become one of the best 205ers in the world, but a star, one who will headline his sixth consecutive UFC main event when he meets Aleksandar Rakic this Saturday.

“It's crazy, huh?” he asks. “Just that kid from Nebraska who everyone said wasn't gonna make it.”

That kid from Nebraska was made of sturdier stuff than most, though. When he got knocked down, he got back up. When he lost at the worst possible times, he dusted himself off and usually started new winning streaks. And through it all, there was a grit that endeared him to fight fans as he made it abundantly clear that if push came to shove, he was not going to quit.

On May 13, Smith got off to a fast start against Teixeira and appeared to be on his way to his second consecutive victory. Then things went south in a hurry in the third round, and soon, he was getting pushed, shoved and battered by the Brazilian veteran. As the one-sided fight continued, Twitter lit up with fans, media and Smith’s fellow fighters wishing for someone to stop the fight, whether it was referee Jason Herzog, Smith’s head coach Marc Montoya, or Smith himself.

Smith didn’t get the nickname “Lionheart” accidentally, even though he knew with two rounds left to go with Teixeira, the odds of him pulling off a miracle comeback were slim and none.

“Once I caught the uppercut in the third round and then I couldn't see the punches coming anymore from that side and he dropped me, going into the corner, I just got that feeling,” said Smith. “My teeth were broken out, I was tired after getting rocked, I couldn't see, and there was this moment where I was like, man, I probably can't do it this time. But that's indicative of my personality in my life and my values and the code that I live by. Just because it's hard, that doesn't mean that you just give up.”

Montoya, given strict orders by Smith to never throw in the towel, gave him instructions as to how to turn the fight around. Smith wasn’t able to implement those instructions, and at 1:04 of the fifth round, Herzog stopped the bout.

Then the real fight began, as Smith, Montoya and Herzog caught heat from all angles regarding the stoppage (or non-stoppage) of the bout. Some was respectful, all coming from a place of concern for the health of Smith. Some wasn’t, wondering why continue to be in danger when there was no sign that the fight was going to turn back in Smith’s favor.

Smith, to his credit, took all that heat, saying it was his decision to continue and that his coaches aren’t allowed to stop his fights. I asked him if he would have fired Factory X’s Montoya if he stopped the Teixeira fight.

“Do I fire him? Yeah,” said Smith without hesitation before explaining his thought process. “At the end of the day, it's the only thing I have control over. Everything else, I completely release control to my coaches. This is the only thing that I hold dear, the one key that I keep to myself. It's essentially like training dogs; they all have override commands. I keep that one. That one's for me, no one else gets that one. They schedule my training sessions, they schedule what we're doing, why we're doing it, they come up with a game plan. I'm like a robot. Here's where you need to be, here's what time, and it doesn't matter what we're doing, just follow the instructions. And I do it to a T every single time. It's the only thing I keep control of and it's the most important thing to me. And honestly, it's been like this my whole career. You guys are just finding out about it now because finally, after 13 years in the game, it finally came into play. But this isn't new. Some people are like, ‘Oh my God, Anthony's losing his mind, he's out of control,’ and the athletic commissions are wanting to sit me down and have meetings with me. This isn't new. It's new to you guys. This has always been like this.”

Fighters are already a different breed. They put themselves in harm’s way every time they step into the Octagon or ring. Then there are those who take things a step further, guys like Arturo Gatti, Diego Corrales and Justin Gaethje, just to name a few. For them, there isn’t just glory when there’s a victory, there’s glory in what happens on fight night, win or lose. It’s pushing yourself past what is perceived as a “normal” breaking point. Anthony Smith is one of those guys.

“I beat Shogun (Rua), I beat Rashad (Evans), I beat (Volkan) Oezdemir, I beat (Alexander) Gus(tafsson), and when I’m winning, it's easy for me to tell you it's not about the result, it's about the journey,” he said. “But you just can't say that and it only means something to you when you're winning. It's the same thing when you're losing. It's about the journey. What did I learn about myself while I was in there, what did I learn about myself during that training camp with the home intruder and the broken hand and the cast and the coronavirus and the shutdown? It's about the journey to get there. So even when I'm in it, the only time that you really figure out what kind of fighter you are is in those situations. The guys that are winning and smoking people, you never know what kind of fighter they actually are.

“There's something to be taken from every situation and when I knew I had nothing to gain by continuing, are you gonna continue?” Smith continues. “Because I'm gonna lose anyways. But what kind of loser do you want to be? Do you want to be one that you can hold your head up high or one that tucks his tail and says, 'Ah, I'll get him next time.' If you had to guess, you probably would have guessed the direction that I took and that's where I am where I am today and I'm not one of the washouts who never made it when s**t got hard.”

Smith pauses, ready to put the Teixeira fight behind him and move on to Rakic and his future in a suddenly wide-open division made that way when champion Jon Jones vacated the title.

“There are fights that keep me up at night,” he said. “This isn't one of them. I did everything I could, I gave it everything that I had, and the result is the result. I think we fight nine more times, I think I beat Glover nine times, but I've been doing that s**t to people for over a decade; it was gonna be my turn eventually.”

Now the task is to make sure there are no more turns as the nail and not the hammer. The 32-year-old has taken all the questions about the last bout with grace and honesty, and yeah, if he gets in trouble with Rakic, the instructions are the same as they’ve always been, but he’s moved forward, even if his critics have not. And the funny thing is, when the topic of throwing the towel in comes up, he has no issue with it. As long as it’s not him surrendering.

“I'm not against throwing in the towel,” Smith said. “If I'm cornering one of my guys and he's in one of those situations where you're gonna start to think about it, I'm gonna lean towards stopping the fight. I'm not against that. I will throw in the towel in a heartbeat. I just don't want it for me. And I know that's a counterproductive statement, but I'm pro throwing in the towel and I think it needs to happen more often. I just don't want it to happen to me. That's a little bit of double speak, but it is what it is.”

If it wasn’t clear before, maybe you’ll see why I said taking a trip inside the mind of Anthony Smith is a fascinating one. He’s not from the generation of least resistance. He’s a fighter to his core, willing to go to lengths many won’t. There’s something to be said for that.

“I was heartbroken about that loss, but my pride is intact,” he said. “I think when your corner throws in the towel, it tells me that they don't believe in me anymore. And my own self-esteem and my own self-belief, I don't think any of that took a hit. My face was broken, I looked like s**t, but my pride is intact and I think that means something. It's not something you can quantify, but it absolutely means something to me.

“Some people think I'm crazy,” Smith concludes. “You don't make it to where I made it and been through the road that I've been through and have any sense of where that line is. Am I crossing the line? Absolutely. But the problem is, to get to where I'm at now in my career and be able to do the things that I've done is because I don't know where that line is. I just don't. I get it, it's tough to watch sometimes and I know some people took it that I was upset at people for caring about me. That's not it at all. It's that I made a conscious decision to stay (in the fight) and I just want that respected. Not to toot my own horn, but they don't make 'em like me anymore. I'm the youngest of the old guard. I came up in the era of your Forrest Griffins and those type of guys. I'm just the youngest one.”