Read on for the latest installment in UFC.com's weekly series of articles on proper nutrition from the biggest names in mixed martial arts...this week, Anthony Pettis 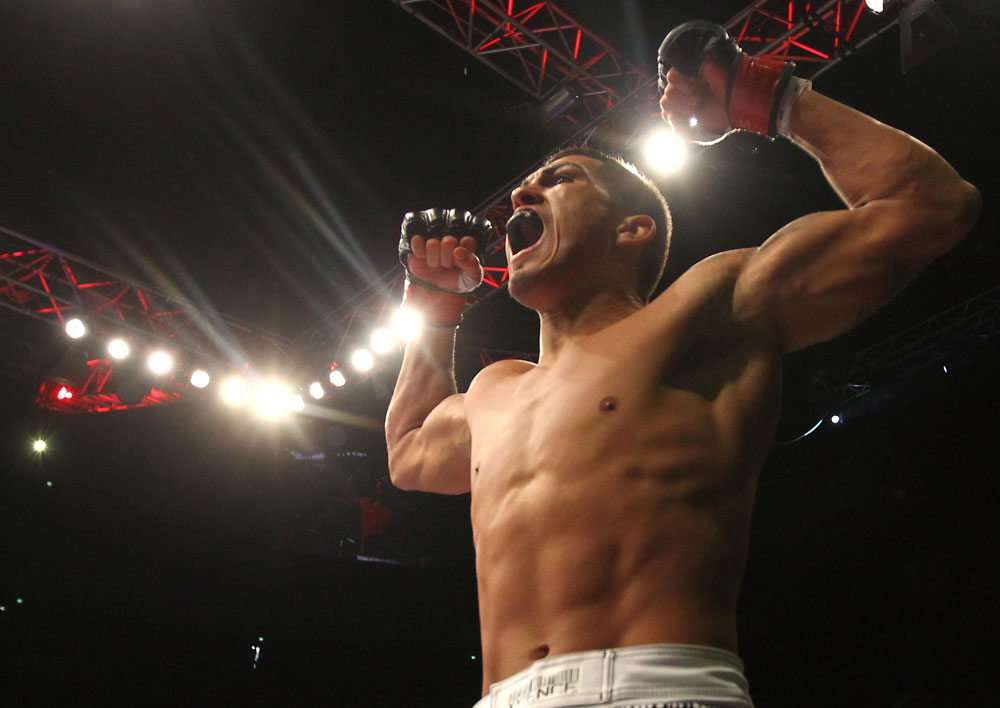 Next time you’re in Milwaukee, “Showtime Bar & Grill” is worth a visit. The establishment is jointly owned by highly-regarded MMA trainer Duke Roufus and his prized protégé, former WEC lightweight world champ Anthony “Showtime” Pettis. On the menu at the hotspot: Pizza with Italian sausage, a Kobe Beef Burger, chili cheese fries and a ribeye steak. All very tempting to the 25-year-old Pettis (13-2), who recently spoke with UFC.com about his predominantly organic diet and how it has made weight-cutting easy.

UFC: What sorts of foods do you remember eating as a kid?
Pettis: My mom wasn’t that good of a cook so she used to make a lot of macaroni and cheese and Spam. My dad was like a master chef at fried chicken; My dad made the best fried chicken ever! That was one of my favorite meals as a kid.

I came from a Spanish family, so we would eat pinchos, which is a Puerto Rican shish-kabob type of thing. We would enchiladas, tacos, rice and beans – all the kinds of things Hispanic kids eat.

Do you consider yourself a big eater?
I’m a huge eater and I’ve been that way ever since I was a kid. I have always been athletic so I was always eating a lot.

What changes have you made to your diet over the years?
I changed my diet because I had to become wiser about cutting weight. In my old sport – Taekwondo – I didn’t have to cut weight. We didn’t go by weight divisions. But once I started fighting amateur – my 20th birthday was my first fight – I had to start cutting weight and watching what I was eating.

I went through two phases. One phase is what I call ‘Eating Dumb.’ I didn’t know how to cut weight, I didn’t t know the right things to do. So I thought the less that I ate, and the cleaner my meals were – I would eat like chicken breast and salad for dinner – I didn’t know how to cut weight so that was my Eating Stupid Phase. So from the beginning of my WEC career (June 2009) all the way up until my camp for the Shane Roller fight (August 2010) I didn’t have a nutritionist so it was just a dumb way to eat.

I used to be hungry all the time so I couldn’t show my full potential in workouts. I was also getting injured a lot. I found out later that I could eat a lot more food, and a bigger variety of food, and still lose weight.

When do you feel like you found the right nutritionist and what does that diet consist of?
It was right after the Henderson fight, actually. I performed well on previous diets, but right after the Henderson fight I went and trained with Urijah Faber (in Sacramento). I met a nutritionist named Eric … and after sitting down and listening to what he had to say I felt like he was the right guy for the job. So I started working with him for the Clay Guida camp.

So that guy in California decides what the meals are going to be and sends them to my cousin, who is a chef and prepares all my meals.

I might eat a 4-ounce chicken breast, some greens, sometimes a carb like a sweet potato. I drink a lot of smoothies. Our big thing is we use coconut oil for everything. I take a scoop of coconut oil every morning when I wake up with a protein shake. I just eat whatever my nutritionist tells me to eat.

Every meal tastes like a regular meal so I never feel like I’m cutting weight. In the past when I was cutting weight my meals would be very plain and very dull. But the stuff I eat tastes amazing – it’s stuff I would pay to eat at a restaurant!

Any rules for your diet?
It’s pretty simple, nothing crazy. I don’t indulge in ice cream or anything crazy.

Do you take any supplements?
I take an organic whey protein. Every meal and everything that I eat is organic during camp. And even out of camp I try to eat clean. Organic just makes me feel better. I take glucosamine and coconut oil.

After making weight for a fight what is your go-to meal?
Yeah, I do the same meal every time after weigh-ins: Salmon, spinach and sweet potato. But my meal the day of the fight always varies. The meal I had before my last fight with Joe Lauzon was pancakes, eggs and bacon. I eat breakfast and that’s it. Then I go big (with food) after my fight.

Do you pack on weight easily or are you one of those insane-metabolism/naturally slender guys who can eat whatever he wants and stay thin?
No. As a kid and in my teens, all the way up to my early 20s I could eat whatever I wanted and I was always slim. But now that I’m 25 I’ve been packing on weight. I’m coming off a shoulder injury so I couldn’t do much working out. I’ve had to watch what I eat. The heaviest I get is 185, but at that weight I feel sluggish and like crap.

Everyone remembers the so-called Matrix kick against Benson Henderson … and you’ve got so many other kicks in your arsenal. Can you still fire off those crazy kicks at 185?
Oh yeah, I can do all the same kicks. They just won’t be as crisp and I won’t be as energized as I’d like to be. My best weight is 170. When I’m at 170, I’m perfect.

So even an out-of-shape Anthony Pettis could knock somebody out with a head kick?
Oh yeah, definitely. That’s something I’ve been doing since I was a kid, so …

Quick question: Who do you like in the rematch between Benson Henderson and Frankie Edgar?
Henderson. I just feel he’s too big of a 155er for Frankie Edgar. I think it will be by decision because Frankie is one of those guys that is a tough, tough guy to finish.