Pettis and Hendricks were joined by Rafael dos Anjos, Carla Esparza and Joanna Jedrzejczyk for the UFC 185 Open Workouts on Wednesday afternoon at the Hilton Anatole Hotel in Dallas, Tx.

DALLAS, Tx.
An estimated 200 fans crammed into the Carpenter Ballroom at Dallas’ Hilton Anatole Hotel on Wednesday for an up-close look at five of the featured fighters set to compete at UFC 185, all of whom showed off their skills during Open Workouts. 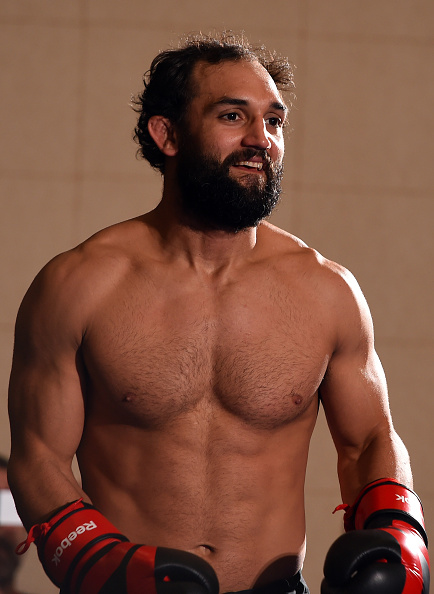 The fans stood behind a security line just a few feet away from the stage where the fighters hit pads. And when local product and former UFC welterweight champion Hendricks came out to perform, the onlookers were treated to an impromptu Q&A session.

“It’s better to get out there and speak to them because these are the guys that showed up to watch us work out,” Hendricks said. “So I like that I get to interact with them that way. I think it was a fun 15 or 20 minutes.”

Hendricks stood at the edge of the stage for almost 10 minutes, talking to fans and answering questions. He broke down the matchup between Robbie Lawler and Rory MacDonald, talked about the difficulties of cutting weight, and even signed and delivered his workout-worn official Reebok training boxing gloves after his performance.
> WATCH: Top 5 UFC 185 Main Card Fighter Knockouts
Hendricks expanded more on the weight cut for his fight with Matt Brown on Saturday night. He said it’s gone better than he could have hoped for and he feels he’s in the best shape of his life.

When Hendricks stepped on the scale on Wednesday he weighed only 181 pounds, just 10 pounds away from where he needs to be on Friday. He said this is the best he’s been at this point in a weight cut.

“When I used to do it on my own I used to starve myself to make 170,” Hendricks said. “I’ve learned some things from Mike Dolce – how to certain things and prep your body for this weight cut.

“So I took what he’s taught me and what I know from wrestling and I sort of pulled back and said, ‘If we’re going to point fingers at anybody I want it to be at me.’ I think it’s going to be the best performance, I’m hoping, that I can do in the Octagon.”

Between the two main event fighters, Pettis received one of the bigger ovations from the crowd when he put on the gloves and hit pads with his coach, Duke Roufus. 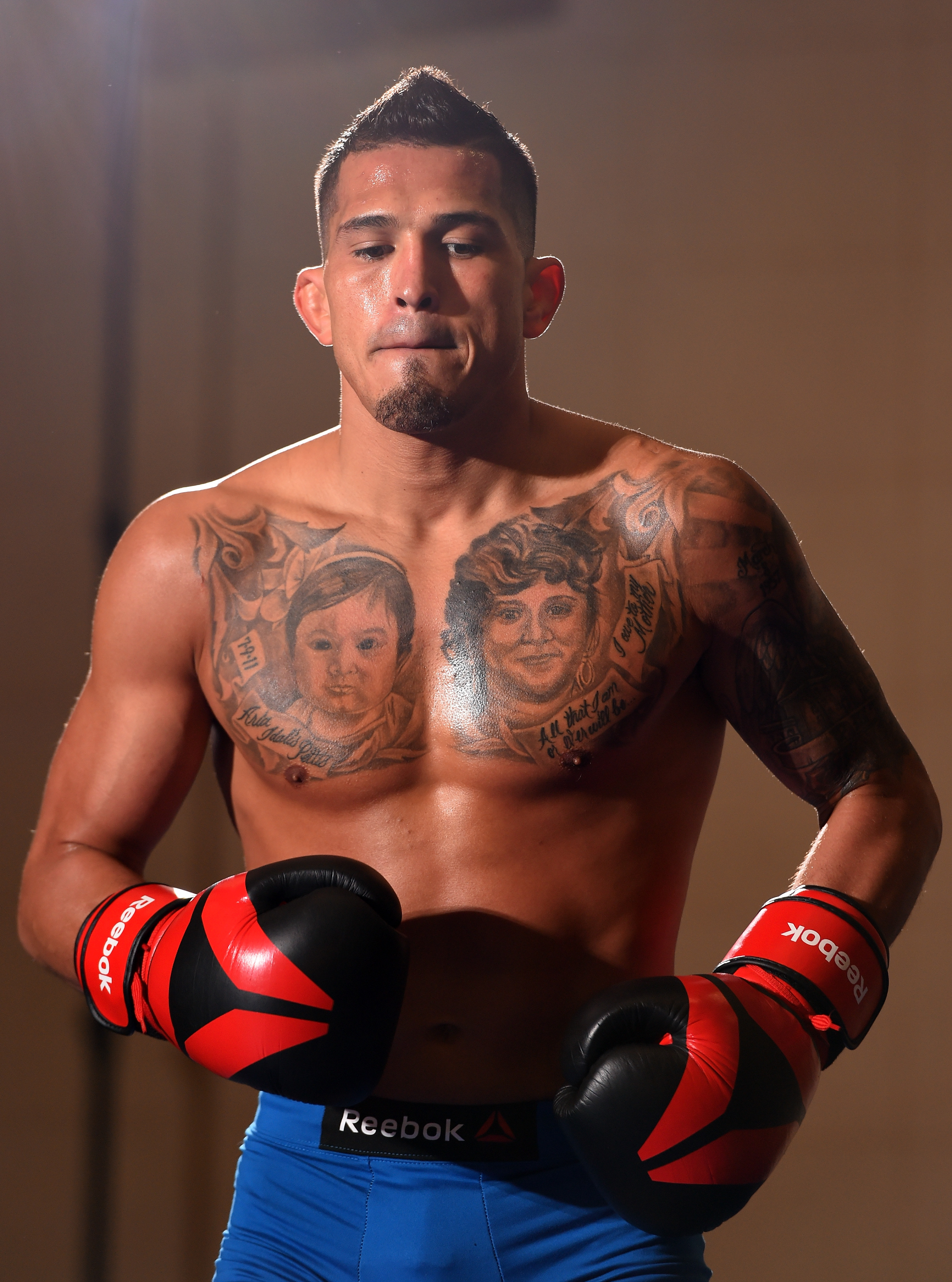 Pettis went hard right from the start, blasting Roufus with his signature leg kicks. The Roufusport head trainer joked with the crowd, telling onlookers that he would “need a vacation” after taking the punishment on the pads from Pettis throughout training camp.

All five fighters impressed with their workouts, but Pettis put on a show with his stand up display.

“You have all these people out here supporting you, you better perform,” Pettis said. “I love it. I embrace that role. I want these people to want to watch me fight, pay whatever the pay-per-view is and the tickets to come watch me fight. It’s my job to make sure they’re happy when they leave.”

In the entire lightweight division, Pettis said he feels dos Anjos is the most dangerous fighter out there.

“Honestly, he’s maybe the most dangerous guy I see on the lightweight roster besides Khabib (Nurmagomedov). He beat (dos Anjos), so you have to say that,” Pettis said. “But other than that, dos Anjos beat Cerrone; dos Anjos beat Henderson. It’s us three at the top of the division, so we’ll battle it out and see who is the best.”
> READ: When It's Showtime, Anthony Pettis Turns Chaos Into Comfort

Pettis said that even though dos Anjos is dangerous, he’s never fought anybody as great as “Showtime.”

Dos Anjos also spoke to the media after his workout, saying the show is about to be over for Pettis. 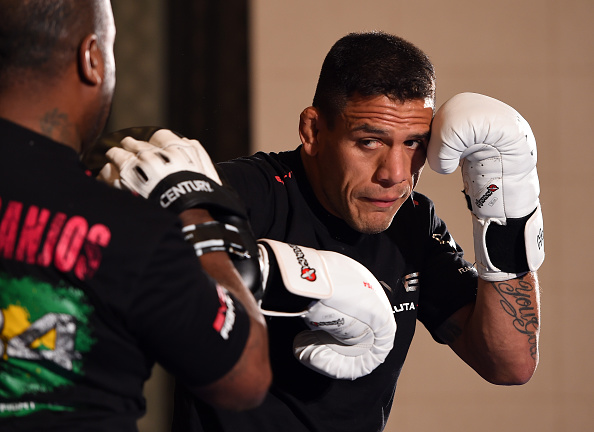 “The way that I feel is it’s a matter of time. The belt has a date to be mine and it’ll be Saturday,” dos Anjos said. “I did everything perfect – all my hard work is done. Now it’s in God’s hands. I did my part and on Saturday night he’s going to do his part.”

Saturday’s appearance will be dos Anjos’ fifth fight in 11 months, and he said the pressure has been lifted because he has finally made it to the championship opportunity that he’s been so desperately seeking. He said the Pettis’ inactivity the past year or so could be the difference in the fight.

“The fact that he hasn’t been fighting a lot is going to make it hard for him,” dos Anjos said. “I’m going to step on that Octagon for the fifth time in 11 months. I’m used to that and I feel like I’m at the gym. I feel great.”
> READ: Focused Rafael dos Anjos Moving Onward, Upward In Time For Fight Of His Life 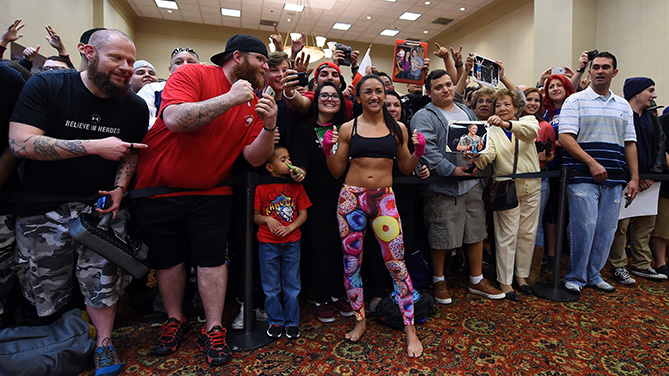 In the co-main event, Esparza and Jedrzejczyk are looking to further the momentum that is at an all-time high in women’s MMA when they meet Saturday for the strawweight title.

This will be the first time the belt will be defended after Esparza’s inaugural title victory at the Ultimate Fighter 20 Finale. The champion said that the stage is definitely bigger at UFC 185.

“I think it’s going to feel a lot different for me when I get out there and see the huge crowd,” Esparza said. “Fighting on the TUF Finale was super crazy and definitely a step up, but I think this is even going to be that much bigger.”
> WATCH: Countdown to UFC 185: Carla Esparza vs. Joanna Jedrzejczyk

Esparza said that women’s MMA has made it, considering Ronda Rousey headlined UFC 184 and now Esparza and Jedrzejczyk are co-headlining UFC 185.

“I think female MMA is basically the biggest female sport out there right now,” Esparza said. “We’re being put on the same stage as the guys and sometimes even – Ronda even headlining – above all the guys. It just goes to show that we’re on top right now.” 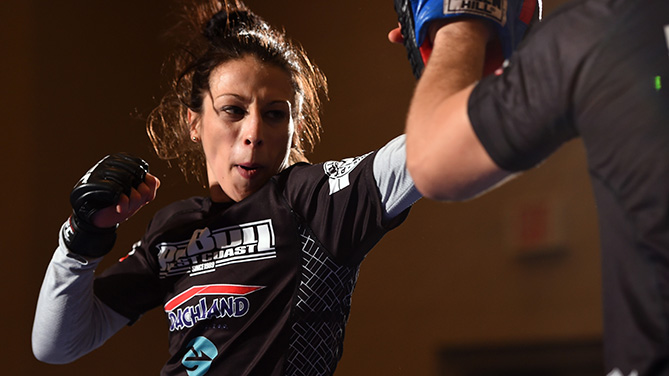 After Pettis, Jedrzejczyk was a close second as far as striking power went during Open Workouts. Actually, her hands were the most impressive of the day.
Jedrzejczyk was the only fighter to use MMA gloves during her workout, and she threw every punch with violent intentions.

When asked why she is so tough, she simply said it’s because she’s Polish. As far as the big stage, Jedrzejczyk said she was born to be a champion.

“Dana White and UFC saw that I’m ready, and I’m here. I can handle it, and I was born for it,” Jedrzejczyk said. “I am going to be a champion.”