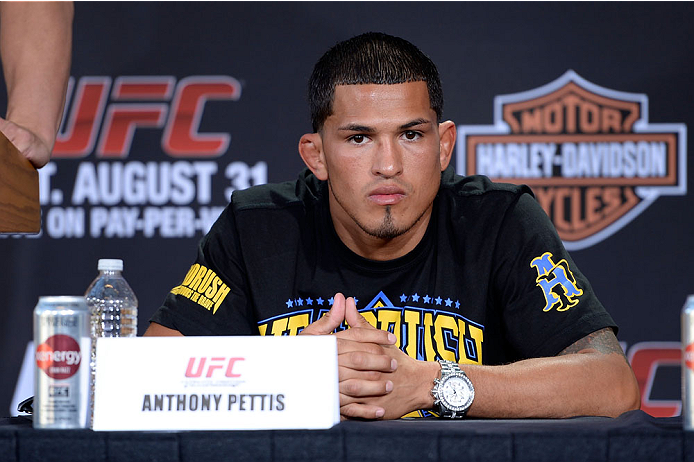 Anthony Pettis has been waiting for a shot at the UFC lightweight title since December of 2010. Nearly three years later, he gets that shot against Benson Henderson in the main event of UFC 164 this Saturday in Milwaukee, and as fight night approaches, “Showtime” has been avoiding black cats, staying away from walking under ladders, and doing nothing that might jinx the biggest fight of his career.

“Man, I think I had the worst luck ever,” said Pettis, who saw an August 3 shot at Jose Aldo’s featherweight crown get scrapped due to a June knee injury. “From injuries to timing to the UFC coming to Milwaukee and me not being on that card at first, I was down and out after that Aldo fight fell through. I thought I did some bad things in a previous life and I was getting punished for it. But everything worked out and obviously it’s here now, so I try to look at the positive of everything.”

It hasn’t been easy. The UFC lightweight title fight Pettis earned with his WEC win over Henderson in their first bout in 2010 disappeared when the draw between then-champion Frankie Edgar and Gray Maynard prompted a return meeting later in 2011. Pettis, wanting to stay active, fought Clay Guida in June of 2011 and lost. He would bounce back with a win over Jeremy Stephens, but injuries kept him to one fight – a knockout of Joe Lauzon – in 2012. A blistering finish of Donald Cerrone got 2013 off to a great start and apparently earned him his lightweight title fight, but then it was announced that he was dropping to featherweight to face Aldo. Then an injury put that fight on ice, but in a rare shot of good news for the 26-year-old, he got the Henderson rematch, for the title, and in his hometown of Milwaukee.

“There was a higher power at work here,” said Pettis. “I was so down and out after the Jose Aldo fight. Everybody’s like ‘oh Pettis faked the injury, he can’t make 145.’ You go from being talked about like ‘Pettis is a top prospect, he’s gonna be a champion,’ to I’m faking injuries because I’m scared to fight

people. So I was down and out, and the way the cards played out, it makes me realize that there was a higher power at work. This was meant to be. I was meant to fight in my hometown, I’m meant to fight Ben Henderson for the lightweight title, and I’m not saying that’s gonna make me win the fight – I still have to work for that – but the way the cards wound up: my opportunity, in my hometown, right in front of me, it couldn’t be more exciting.”

And there isn’t a more exciting lightweight fight that can be made at the moment. It’s got all the elements: a great backstory, high stakes, a hometown hero looking to win a title, and a champion searching for redemption from his only loss in the last seven years. And when Pettis is involved, excitement almost always follows, thanks to a high risk / high reward style that favors creativity over everything else. That’s not something he learned at Duke Roufus’ gym though; it’s something he was born with.

Of course, when you think of Pettis’ dynamic style, the first thing that comes to mind is his “Showtime Kick” off the fence in the fifth round of the first Henderson fight. It was a move that will live on in highlight reels forever, and rightfully so, but Pettis does admit that there is more than being spectacular on his mind these days after losing to Guida on points and seeing Henderson win a number of close decisions in title fights.

“He (Henderson) is changing up his stances and doing different things, but he’s not fighting much different,” said Pettis of the champion. “He’s a little more intense out there, but then again, he’s not convincingly winning fights. He’s not out there demolishing people, so when you fight a guy like Ben Henderson, I’m not worried about getting knocked out, I’m not worried about getting submitted, I’m worried about getting outpointed. So that plays into my game plan, how he’s been fighting. And not taking anything away from him, he’s a great fighter, he’s a black belt in jiu-jitsu, his striking’s getting better, and his wrestling’s some of the best in the division, so he’s one of those guys that has gotten better and understands the game a lot better too. And so do I. After that Guida fight, it totally changed the way I thought about points and the way that fights should be fought. You’ve got to understand that at the end of the day, you better be up on the judges’ scorecards.”

So how does Pettis keep everything that made him special while still doing what’s necessary to win fights on the scorecards as well? > Watch: Pettis Pre-Fight Interview 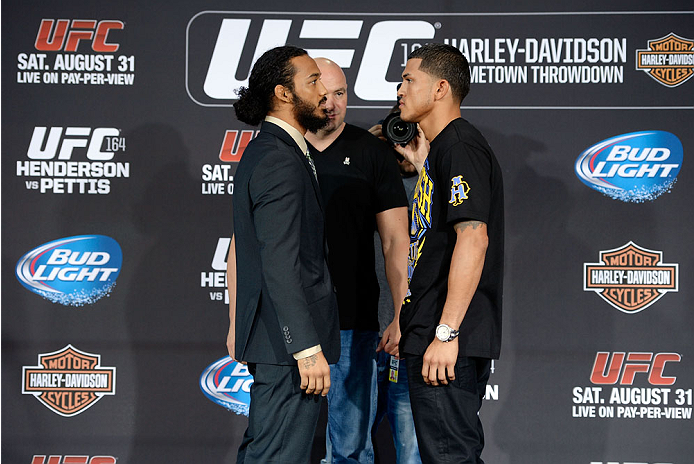 a good chance I could lose. I’m the guy now that I’m figuring out how to beat these guys in the first round. I don’t want to go five rounds and 25 minutes; I’m trying to get you out of there in the first five.”

That’s why if you’re a fight fan, you love watching Anthony Pettis, simply because every time he’s in the Octagon, there’s the potential to see something you’ve never seen before. That could happen again this Saturday, but what Pettis wants you to see for the first time is a Milwaukee fighter winning a UFC title. And as far he’s concerned, then he can finally let go of everything that’s happened since December of 2010.

“The only way to get over it is to win the title,” he said. “I’ve got to get in there, have the best performance of my life, have that belt around my waist, and then it will all make sense.”