Anthony Pettis: The Champ is Back

"I gotta go out there and remind everybody of who I am." - Anthony Pettis 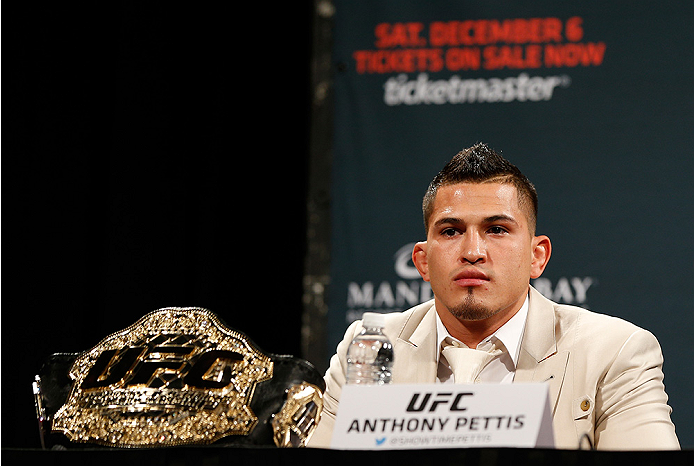 The spur of the moment can create many things, some a fighter will regret later on. So after the internet blew up last week with UFC lightweight champion Anthony Pettis’ assertion that he will need less than five minutes to dispatch challenger Gilbert Melendez in their UFC 181 showdown on December 6, it was only fair to ask “Showtime” whether he wanted to clarify that statement for posterity’s sake.

“I gotta go out there and remind everybody of who I am,” Pettis said, making it more than clear that despite being out of the Octagon since August of 2013 due to injury, he doesn’t want to stick around and embrace his time back on active duty for a full 25 minutes. That doesn’t mean he dismisses the former Strikeforce champion – who has never been stopped in 25 pro fights; he just feels that “El Nino” won’t last long with him on fight night at the Mandalay Bay Events Center.

“Gil’s a tough opponent,” Pettis said. “He’s one of those guys that just goes out there and likes to fight. You saw him in the Diego Sanchez fight throwing bombs, the Ben Henderson fight went five rounds - but that’s the thing for me, I don’t really see him as a big threat. He doesn’t really knock anybody out, he doesn’t submit anybody; he kinda goes out there and keeps the same pace the whole fight, so I’ve got to break that down and make sure he doesn’t go five rounds with me.”

In the back of nearly every statement Pettis makes these days is a notion that even after winning eight of his last nine bouts, winning the UFC lightweight title, and being seen as one of the sport’s true young superstars, Wheaties box cover and all, there is something to prove against Melendez and everyone else at 155 pounds. It’s almost as if Pettis’s injury-induced layoff has kept him from enjoying being champion.

“I’ve got to get back in there and get a defense under my belt,” he said. “I definitely got some cool experiences – the Wheaties box, The Ultimate Fighter show, sponsors like Reebok and some big companies out there, so I definitely experienced that end of it, but the actual fighting side is what I’m going for, so I think once I get some fights under my belt, I’ll get the full experience of being champ.”

Now the only thing to be watchful for at this point is Pettis remaining healthy after the knee injury that has kept him out of action. In the past, the Milwaukee native has pointed to his tendency to train like he fights as the reason for his multiple injuries, and while he claims that this camp is the same as the others in terms of intensity, there have been a few tweaks made along the way.

“I’ve got to trust in this knee like nothing even happened, so if I go in there doubting my knee or doubting myself, I won’t have the same outcome, so it’s business as usual,” he said. “But I think I’m a little smarter with my training. I don’t spar as much or go with as many new people as before. I’m more reserved on who I train with, but it’s definitely business as usual.”

Fighting “Showtime” is never business as usual for opponents though, with few, if any, fighters having the skill set or athleticism to pull off the moves he does in the Octagon. That’s something nice for him to have in his back pocket as he preps for his return.

That spells trouble for a division that is seemingly getting more interesting daily, with contenders like Donald Cerrone, Khabib Nurmagomedov, and Rafael dos Anjos all looking for a crack at the champ.

“I love it,” Pettis said. You’ve got guys like Donald Cerrone, I beat Cerrone a few years ago in the first two minutes and now he’s pleading for a title shot, and the fans are believing him. I love it. I just gotta remind everybody of what my skill set is and what I do out there. I think after this next fight, everybody will be back on Team Pettis.”

Have they forgotten though?

“Mixed martial arts fans have so many fights to look at, so they’re very quick to forget,” Pettis said. “It’s been a year off for me, so I gotta go out there and remind them again.”