"It doesn’t matter if the match is five, ten, or 15 minutes; you’ve got to fight to the end and don’t just try to survive." - Anthony Perosh 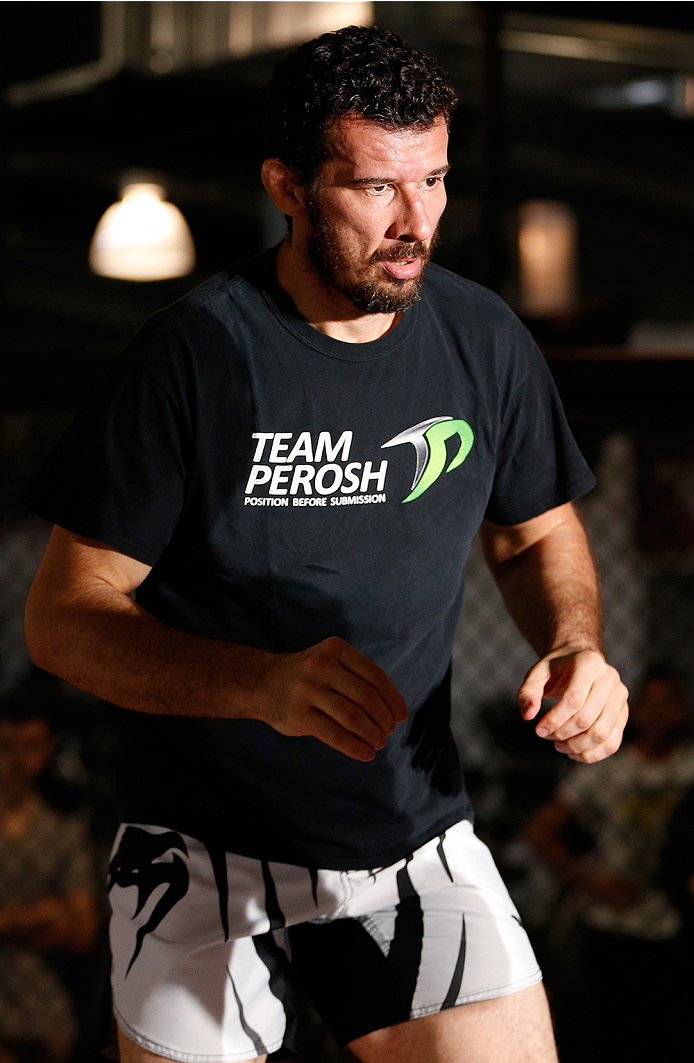 Toughness has always been a key part of Anthony Perosh’s fighting personality. Taking a bout against Mirko Cro Cop on a couple days’ notice back in 2010 cemented that reputation. But when he hung in there for three punishing rounds against Ryan Bader back in December, some wondered whether Perosh was being too brave for his own good. He disagrees.

“In the world of MMA it’s all about who’s first and he rocked me first,” Perosh said. “And to Bader’s credit he was relentless with his pressure. He didn’t do the classic wrestler game of just lay and pray. He went for the finish. And I wasn’t just trying to survive; I was trying to get up and win, but to his credit, he just kept going.”

The loss was only Perosh’s second since the Cro Cop fight at UFC 110, and around those two defeats were four UFC wins, all by KO or submission. But when you’re 42 years old, people tend to put a lot more weight on each defeat. Not Perosh, who, despite a knee injury that took him out of a June fight against Gian Villante, feels better than ever heading into his Friday matchup with Guto Inocente in his hometown of Sydney, Australia.

“After that match (with Bader), I feel great,” he said. “The body’s still good, and I want it more than ever. I’m not going anywhere yet.”

That’s good news, and not just for this 46-year-old writer and all the other 40-somethings who get up and cheer every time one of our own picks up another win in the Octagon or ring. It’s good news for all fans who can appreciate a fighter who is always going for the finish, and who will keep trying even when the odds of turning things around are slim and none. That was Perosh’s philosophy throughout the Bader fight, as he kept hoping for that one mistake that he could capitalize on.

“I give my students the same advice and I lead by example when I tell them that you have to fight to the end,” he said. “It doesn’t matter if the match is five, ten, or 15 minutes; you’ve got to fight to the end and don’t just try to survive. Anything can happen. What bothered me during that match was I never got back in it. Every time I thought I’d get almost to a half-decent position, he’d be back on me.”

When those sudden turnarounds don’t happen, it’s a long walk back to the Octagon and a couple painful weeks of healing up. When they do though, all the bumps and bruises are worth it, and after nearly 11 years as a pro, it’s what keeps the Aussie MMA pioneer going in this toughest of sports.

“Especially with small, four-ounce gloves, one punch can turn it around, or one submission can turn it around just like that,” he said. “You can be in a dominant position, you stick your head down and all of a sudden you’re being guillotined and you’re on top. So you have to keep your wits about yourself the whole match.”

That experience is priceless and the mindset is necessary at this level of the game. So when Perosh takes on Inocente tomorrow night, the hometown favorite believes he already has a step up on his opponent.

“I still don’t know too much about him,” Perosh said of the Blackzilians’ Inocente. “I’ve seen his last couple fights and it could be a classic grappler vs. striker match. He’s a good boxer and his kickboxing is his main strength. He’s got a purple belt in BJJ so he’s half-decent in BJJ as well, but that doesn’t bother me – I eat purple belts for breakfast.”

That’s a BJJ black belt talking, but Perosh isn’t neglecting the other parts of his game. Already blessed with the finishing power in his strikes that led him to knockouts of Vinny Magalhaes and Nick Penner, “The Hippo” also augmented his training for this fight with three weeks with Greg Jackson and his team of stalwarts in Albuquerque to make sure that Inocente has more than submissions to worry about.

“Everyone says I have the power to knock someone out, so my goal when the bell rings is to let my striking set up my takedowns, and if on the way in I knock him out I’ll knock him out,” he said.

So is the man with a 14-second finish of Magalhaes looking for an early evening in Sydney?

“Don’t get me wrong, I’d love to finish every match in the first minute or the first round, but like my coaches tell me, we’re always preparing for that 15-minute war, and it does feel good that I can do that as a backup, and it gets in my opponent’s head as well that if he wants to finish me, he’d better give it all he’s got,” Perosh said, and no truer words have been spoken.

Honesty like that is what makes Perosh one of the most likable veterans in the sport, and when a fighter has a personality that makes you want to cheer for him, you have to wonder just what kind of Hollywood ending this unlikely story could end up with. He has an answer.

“In an absolute perfect world, I get my hand raised and Dana White is putting the light heavyweight belt around my waist,” he said. “That’s the perfect world. But as a short-term goal, I want to get my hand raised and win this next match and then in the next match have another high-caliber opponent like I did with Bader and get into that top ten. That would be fantastic.”