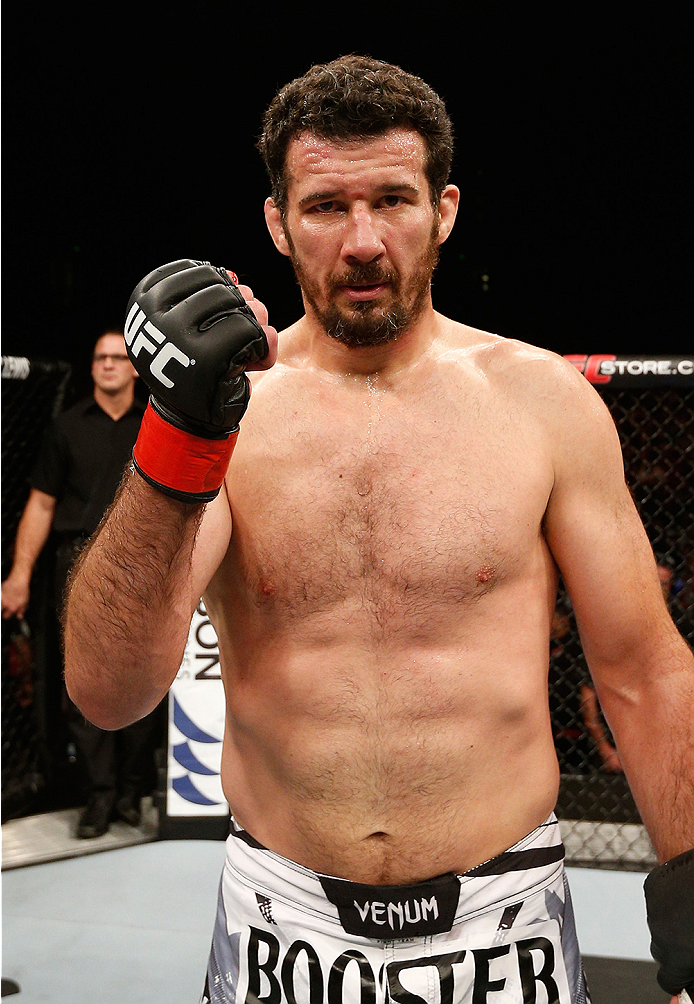 When Anthony Perosh says that, with no hint of a chuckle, you don’t know whether he’s serious or not, and that shows you precisely where the 42-year-old Sydney native’s career is at in 2015.

Days away from what should be a Fight of the Night-caliber throwdown with Sean O’Connell in Adelaide, Perosh isn’t a fighter on the tail end of his career or someone kept around to keep fans happy on shows Down Under. These days, “The Hippo” is 5-2 in his last seven fights in the Octagon and he may actually be getting better.

For proof, look no further than his most recent bout, a November 2014 submission of Guto Inocente that saw him looking sharper than ever in all aspects of the game. Perosh agrees that in a UFC career filled with a 14-second knockout and plenty of submissions, this was him at his finest.

“Going back to my last match, I really turned a corner, so to speak, especially with my striking,” Perosh said. “Both Greg Jackson and Mike Winkeljohn have fixed up my stance, my footwork and my head movement, as well as my attacks and defense, and I used it straightaway. It was almost like the clouds separated and it was a hallelujah moment in that last camp. And I was so happy to put it into practice. And now I’m even better since my last fight and I just want to keep going.”

Perosh doesn’t hide the fact that he believes the performance against Inocente had a lot to do with his decision to travel to the Jackson / Winkeljohn MMA camp in Albuquerque, New Mexico, so when it was time to get ready for O’Connell, he made the trip again. For him, the decision to head to the renowned camp was a simple one for a number of reasons.

“Number one is the great coaches,” he said. “They actually care about you and all the fighters, and they want to see you improve. They look at your sparring and the opponent and work out a game plan and work on your technique and strategy. Number two, it’s great sparring partners. You have a lot of UFC fighters, a lot of big guys there as well, and everyone there is there to help you. When we spar, we’re not there to take each other’s head off, but it’s still competitive sparring, and at the end of the day we’re trying to get each other better. And the final thing is that even though MMA is an individual sport, there really is a good team feel at Jackson / Winkeljohn’s.”

Add in Perosh’s Aussie coaches Steve Rudic and Shaun Sullivan, and he has the best of both worlds in terms of preparation. Even better still is the reality that while working with Jackson and Winkeljohn, he doesn’t have to the boss anymore; he can just concentrate on fighting.

“The first few fights in the UFC at light heavyweight, I would organize my own camp,” he said. “So I’d do eight weeks in Australia, I’d have a boxing coach who’s been with me from the start, then I’d get in a wrestling coach and a BJJ coach and also find sparring partners as well, so I had to kind of do it all myself.”

This new system has clearly paid dividends, not just in the Octagon and with technique, but in terms of clearing Perosh’s head and allowing him to keep getting better. Change isn’t easy, especially when you’re in your 40s and have been doing things a certain way for years, but for Perosh, better late than never.

And now, with a big win under his belt, a home game in Australia, and the respect of a fan base that doesn’t look at him as the 42-year-old guy in the Octagon anymore but as the finisher from Sydney, it’s got to be satisfying to have finally reached that level.

“I don’t sit down at a particular time or anything like that, but that sort of stuff does pop into my head, and it’s great motivation to keep going,” he said. “I had my best fight in my last win, and I just want to get better.”

“I fight for myself. I just want to be the best possible fighter that I can be, but it does feel good to shut up some critics.”

This time he laughs, but you know for sure that he’s serious.