"You have to perform at your best and stay on top of your game to keep
your place. If you don’t, you will be the next person that gets booted
out. That’s why I work so hard." - Anthony Njokuani 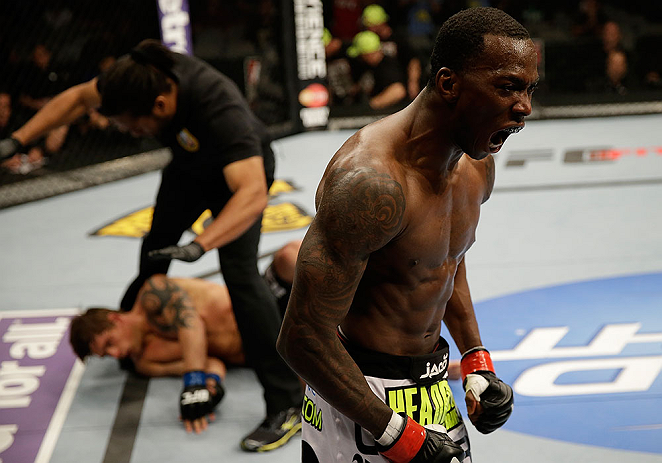 There is something to be said about staying power in the fight game. The sport of mixed martial arts is unforgiving by its nature and those who can’t keep up with the rolling currents are cast back to the shores as the next wave of talent emerges. While this is a process every fighter eventually succumbs to, the ability to ride high on the waves for a lengthy amount of time is a badge of honor in itself.

To put it bluntly: There is something to be said about staying power at the highest level of the sport and Anthony Njokuani is a man with a track record to back him up. For the past five years, the WEC veteran has been a mainstay in the 155-pound ranks and has built a resume that accurately reflects the level he’s competed at while under the Zuffa banner. Even more to the point, he’s remained a relevant factor in a lightweight division which has arguably become one of the most talent-rich collectives on the UFC roster.

That particular accomplishment is no easy task and there are only a handful of routes a fighter could travel to make this a reality. The first of which would be to put together lengthy winning streaks, and while the 34-year-old has found his fair share of success inside the cage, stacking together victories is something he’s struggled to do. That said, the other clear path to longevity is when a fighter consistently shows up and puts on memorable tilts and competes with a level of passion that makes fans want to see them fight again.

In the latter category, Njokuani is somewhat of a professor, and he knows what it takes to remain a dangerous threat in a weight class filled with sharks.

“I see a lot of monsters in this division,” Njokuani said. “The lightweight division is a very stacked division and you have to bring your A game every time out. You can’t slouch out there because there are a lot of beasts at 155. You have to perform at your best and stay on top of your game to keep your place. If you don’t, you will be the next person that gets booted out. That’s why I work so hard."

The Nigeria-born fighter has proven to be a handful for anyone who stands across from him when the cage door closes, with a collection of those unfortunate souls being permanently embedded in his own personal highlight reel. One particularly memorable moment in his career came at the expense of Chris Horodecki at WEC 45 in 2009 when the young Canadian decided to nonchalantly turn away from an alert Njokuani, who pulled the trigger and dusted “The Polish Hammer” in brutal and unforgettable fashion.

“Whenever someone stops me on the street that is what they ask me about,” Njokuani stated. “They don’t ask about any other knockout but that one. Every once in a while someone will ask me about the Barboza fight, but it’s mostly that knockout. Of all my fights in the WEC and the UFC, that is the one they remember the most.”

Well-timed head kick finishes aside, Njokauni is undoubtedly one of the premier strikers in the lightweight division and those skills have melted and crumbled more than a few notable fighters. The most recent victim to be added to that list was former Strikeforce powerhouse Roger Bowling when the two stepped into the Octagon in San Jose last April.

The Cincinnati-based fighter is notorious for blitzing his opponents and overwhelming them with brutal power shots, and Njokuani’s unique blend of patience and precision proved to be the perfect solution.

“That fight was a lot of fun because I was coming off a hand injury and there was so much going on in my mind,” Njokuani said. “It was a spectacular win and great for my comeback. Getting that kind of knockout - especially against a guy like Bowling who hits like a Mack truck - is a great feeling. It felt phenomenal to perform that way. Even though I didn’t knock him out with my right hand, it was still great to finish him like I did. I felt good being able to give the audience that kind of finish and to give everyone in the UFC a win like that.

“He charged too much and I used it against him. I threw a fake kick to the face because I knew he was going to come in after that and I timed it perfectly.”

While Njokuani was riding high following the victory over Bowling, he was forced to deal with an injury that kept him on the sidelines for the remainder of 2013. Nevertheless, the Las Vegas transplant is ready to get back to working his way up the lightweight ladder and that journey will resume when he squares off with Vinc Pichel at UFC 173 on May 24 in Las Vegas.

Much like Bowling before him, Pichel brings a power-based style into the Octagon, and Njokuani believes many of the same methods will apply. He’s a proven counter-striker with the ability to connect no matter which direction he chooses to move and he believes that will be the key to victory against The Ultimate Fighter alum.

“I love this matchup from a stylistic standpoint. You have a guy who comes with a lot of aggression. He doesn’t back down and I’ve heard he hits pretty hard. But there is always a way to counter off that…especially with my style and the way I move. I’m going to play a smart game, pick my shots and hopefully get another knockout victory.

“[Pichel] comes forward a lot and I’m going to use that against him the same way I did against Roger Bowling. I’m going to wait for him to make that mistake, then I’m going to capitalize on it.”

Even though his fight with Pinchel will come more than a year since the last time he stepped into the Octagon, Njokuani believes nearly two decades spent in combat sports will ease the pressure of a layoff. He knows what to do when the cage door closes and he finds a tremendous amount of motivation from the fact that the fans get excited to watch him perform.

He invests his time in the gym to make sure he can give everything he has on fight night when the stands are filled with people who paid to see a fight. Njokuani is determined to do his part to make sure they get what they came for and he has every intention of putting on another brilliant performance in Las Vegas.

“I love the fact that people love what I do,” Njokuani said. “That means I’m doing things right and I love that the fans love to watch me fight. That’s why I bust my butt out there and in the gym, so that I can give the fans something to get excited about. I want to give them a show and a great performance. That’s what they want to see and I plan on giving them a really good show on May 24.”