“Barboza’s one of the top prospects...so in order to prove yourself or see where you stand, you have to fight somebody like that.” - Anthony Njokuani 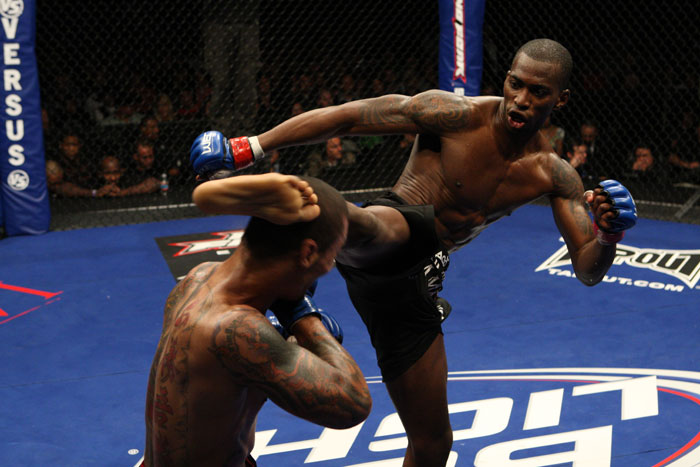 In Nigeria, combat sports begin and end with Dick Tiger, a boxing Hall of Famer who was a two-division champion (middleweight and light heavyweight) when that actually meant something. And though there have been notable fighters from the nation such as Hogan Bassey, Samuel Peter, and Ike Ibeabuchi throughout the years, their discipline has been a singular one – boxing.

So when Enugu-born Anthony Njokuani told his parents that he was adding Muay Thai and then mixed martial arts to his list of recreational activities, there was some obvious concern.

“They didn’t understand it at first,” said Njokuani, who moved to the United States in 1983. “Being from a Nigerian family, they always want you to be either a doctor or a lawyer, but when they understood that it was something that we loved, they came to all our competitions and fell in love with it. They knew that we can’t always follow in their footsteps; we have to go in our own direction. So once they saw that, they were very happy with it.”

But in a sport where Nigerian-born fighters aren’t filling rosters like American, Brazilian, or Asian athletes, Njokuani, his brother Chidi (4-2 in MMA), and the Ologun brothers – Andy and Bobby – are the ones responsible for introducing this fairly new combat sport. Leading the charge is the 31-year old “Assassin”, who made a name for himself as a WEC lightweight contender and now has the chance to do the same in the UFC when he makes his debut against Edson Barboza on the UFC 128 card this weekend.

“Once people started knowing that I’m from Nigeria, I’ve been hit up by so many Nigerians that I’ve never been hit up by before,” said Njokuani proudly. “My Facebook page is full of Nigerian fans who are loving it because they actually have somebody that they can look up to and say ‘he came from the same place that I come from, this is my brother and he’s doing very well.’ So they’re loving it.”

They have good reason to. Njokuani comes from the school of ‘score knockouts, ask questions later,’ and with his last seven wins coming by way of KO, when he’s in the Octagon, odds are good that someone will be leaving with a headache. Then again, those seven wins also have some losses in between them, and therein lies the riddle of Njokuani. If you stand and trade with him, you could be in for a short night, but if you can get him to the mat like Donald Cerrone, Ben Henderson, and Shane Roller did, then you can force him to tap out.

Njokuani, who now makes his home in Las Vegas, is well aware of his rep, and even though Barboza is a fellow striker raised with Muay Thai, he’s not neglecting his ground game in the lead up to the bout.

“Even though he is a striker, I always focus on the other stuff because you never know,” he said. “I’m focused a lot more on my jiu-jitsu and my wrestling because it has happened to me before with other guys who claimed to be strikers and when I get the best of them they end up taking me to the ground.”

Strange what a few highlight reel knockouts can do to turn strikers into wrestlers, and Njokuani has his share of memorable finishes. Most notable was his memorable three fight stint in 2009 where he knocked out Bart Palaszewski, Muhsin Corbbrey, and Chris Horodecki in successive bouts, all of which earned WEC Knockout of the Night honors. Next up after that trio of finishes was wrestling specialist Shane Roller in April of 2010, and Njokuani was ready to make it four for four.

He put in the long hours in the gym with Nick Blomgren and Sergio Penha in preparation for Poland’s Maciej Jewtuszko last August, but tactical mistakes and an unorthodox foe led to a first round stoppage loss, his first ever defeat by knockout.

“Once I went up against Jewtuszko, I made the big mistake of not doing my in and outs and my lateral movements, and I was just coming in with the straight wild shot. And once I did that, he was able to capitalize and get that knockdown on me.”

It didn’t help that Jewtuszko’s wild style left the technical sharpshooter at a loss for how to react.

“It is tough to fight somebody like that and those are the kinda people that you have to watch out for because they just don’t give a damn,” he laughs. “They’ll throw whatever, and if it lands, it lands; if it doesn’t then they’ll switch to something else. It’s hard because you can’t find people like that to spar with. Not that many people will take chances like that.”

What the Roller and Jewtuszko fights did do was teach Njokuani valuable lessons that he could take and move forward with. Like boxing in the time of Dick Tiger, mixed martial arts doesn’t black ball a fighter for a few losses. It’s what you do with those losses that counts. When Tiger won his first world title, defeating Gene Fullmer for the middleweight crown in 1962, he entered the ring with a 45-14-2 record compiled in 11 years of prizefighting. Njokuani won’t likely need to take such a road in his career, but at 14-4 and with nearly eight years as a pro under his belt, he’s paid his dues. Now it’s time to cash in with some big performances in the UFC, and he’s looking to join his WEC brethren, like Cerrone, Roller, and Danny Castillo, who have already made significant noise in their first Octagon appearances.

“A lot of the WEC guys are just out there to prove themselves,” said Njokuani, who finished his WEC career with a second round TKO of Edward Faaloloto last November. “They used to call us the red-headed stepchild of the family, so the WEC guys just want to prove themselves to the world that we belong here, and pretty much so far, they are.”

And about that “red-headed stepchild” perception…

“It’s just extreme motivation. It gives us the mindset of we’re gonna go out there and let these people know that we can compete these guys. When I hear that kinda stuff, it really motivates me a lot.”

Motivation also comes in the form of Njokuani’s opponent, Barboza. A Brazilian Muay Thai ace who had a 25-3 with 22 KOs record in the art of eight limbs, the 24 year old made an immediate impact in the UFC last November when he stopped Mike Lullo in the third round. That’s impressive enough, but when you consider he finished the fight with leg kicks, it adds even more to the prospect’s mystique.

Njokuani admits that Barboza “has very tough leg kicks,” but he makes sure to add, “I’ve been kicked with leg kicks for about 13 years in Muay Thai, so it’s nothing new to me. If you know how to defend the leg kick, you can take it. If you don’t, like Lullo, you’ll get cracked like that. His background was straight wrestling, and if you haven’t done Muay Thai all your life or in years, that’s going to be extremely painful for you.”

Pain is something Njokuani knows about dishing out, so when he was presented with the fight, it was a no-brainer for him to accept it.

“Barboza’s one of the top prospects, he’s an up and coming fighter, and a lot of people are talking about him, so in order to prove yourself or see where you stand, you have to fight somebody like that,” he said. “I was ecstatic when they gave me the opportunity to fight him.”

He admits that he wants to keep his Octagon debut as “just another fight,” but it’s a lot more than that. It’s an opportunity to represent Nigeria once again, introduce himself to UFC fans, and begin his quest for a world championship. Just another fight? Hardly. This may be Anthony Njokuani’s coming out party on the world stage, and when you ask him what he hopes the fans take away from their first look at him in the UFC, his answer is as to the point as one of his kicks to the head.