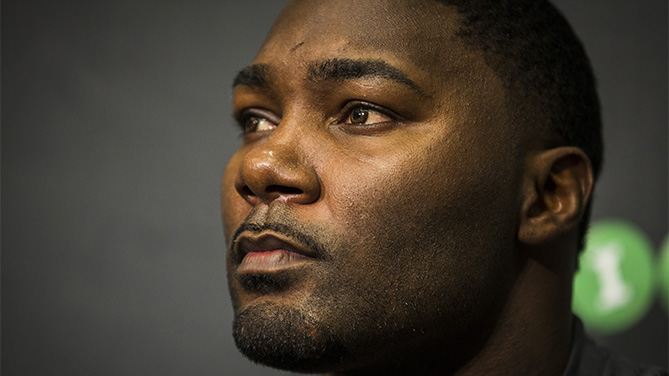 Anthony Johnson is in a good place.

It took him a while to get there. It also took patience and faith and strength. When things were at their worst, when his depression made him think about quitting and doing something else, he found resolve and support.
> READ: Daniel Cormier's Second Chance

All the trauma and drama of the past several years – the weight issues that got him dropped from the UFC, then a false domestic violence claim that stalled his successful return – are finally behind him. He can look forward, not back.

He sees opportunity in front of him, a chance to fight for the light heavyweight title Saturday night and wear the championship belt he has pursued for eight years. 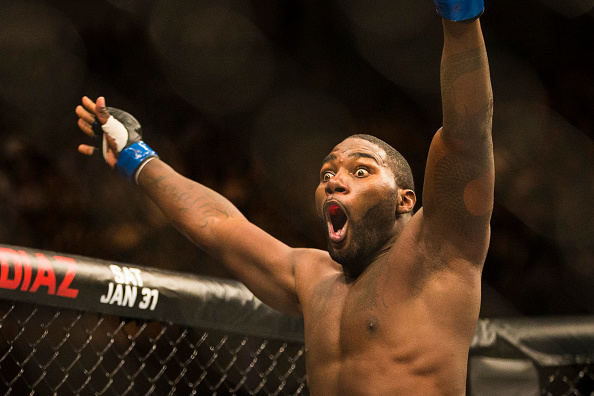 Now he can say it: Life is good.

Daniel Cormier should be his only concern, but Johnson is so happy, so content at this very moment, that nothing bothers him about their fight at UFC 187. The fact that he’s fighting Cormier and not Jon Jones, who was stripped of the title last month following his arrest in Albuquerque on a felony hit-and-run charge, changed nothing.

His training remained the same; only the intensity was ramped up.

“I’m going to have to push myself a lot harder,” he said of facing Cormier in the weeks leading up to the fight. “He’s going to come and bring it. This is his second opportunity. He missed out on it once and he knows that he’s blessed and fortunate to have a second opportunity after the situation that occurred with Jon Jones. 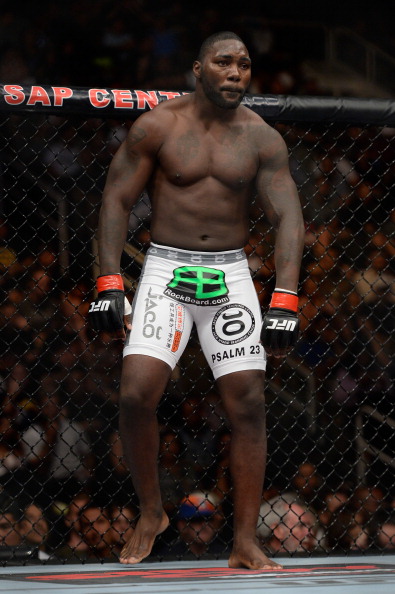 “He’s hungry, man. But the thing is, I’m hungry too, and that’s going to make for a great fight.”

Cormier, who lost a unanimous decision to Jones at UFC 182 in January, was picked to face Johnson after the light heavyweight title was vacated. And while Johnson would have preferred to meet Jones, considered by many the greatest MMA fighter in the world, he knows that life is unpredictable.

His own life has been an uncertain path, from strip club bouncer to the UFC’s No. 1 contender after costing himself a spot on the company roster because of his repeated failure to make weight.

Released from the promotion in January 2012 after being 11 pounds over the middleweight limit and then losing to Vitor Belfort via submission, it appeared that Rumble Johnson might never return.
> WATCH: Dan Hardy & John Gooden UFC 187 Breakdown

But more than two years later, he did – not as a middleweight but as a 205-pounder. 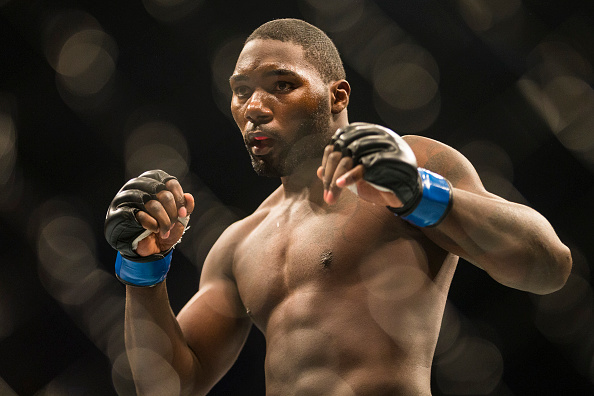 His struggles regarding weight have been well chronicled, but Johnson doesn’t second-guess himself for any of it.

“I don’t regret any of the mistakes I’ve made regarding my weight because it made me who I am today,” he said. “If I would have been on-weight back in the day, I probably would’ve been arrogant and wouldn’t have been focused like I needed to me. Missing weight made me kick it into the next gear and do what I needed to do to be a successful fighter.”

There are no problems now at 205 pounds. Most important is that Johnson hasn’t lost any of his quickness or punching power. His brutal first-round knockout of Sweden’s Alexander Gustafsson earlier this year proved he remains a vicious puncher at any weight.

“Anthony has raw power that I don’t see in other fighters,” said Henri Hooft, Johnson’s head coach at Blackzilians. “He hits you one time and it’s done. The fight is over.” 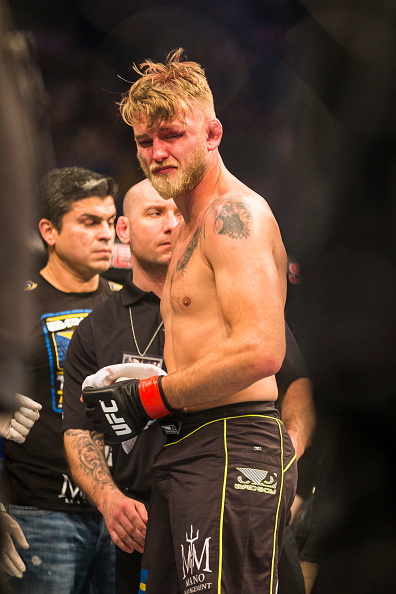 Even more impressed was UFC president Dana White, who watched Johnson score wins over Phil Davis and Antonio Rogerio Nogueira after returning to the UFC, but was admittedly stunned by the crushing knockout of Gustafsson.

“I never in a million years would believe that a guy who fought at 170 pounds could knock out 205-pounders. No way,” White said. “I said, ‘He’s done OK, but there’s no way he’s going to do that to Gustafsson.’ And he did. I’m blown away by what he’s been able to do.”

Johnson is on a nine-fight winning streak, although six of those came on other shows after he left the UFC. But they allowed him to sort out his weight issues, regain his focus and finally decide that his future in the sport was at light heavyweight.

He defeated a heavily favored Davis by unanimous decision at UFC 172 and KO’d Nogueira in the first round three months later. But he resisted any temptation to shout, “I’m back.”

“That wasn’t the feeling that I had,” he recalled. “I was living in the moment. It was, ‘Thank God I got over the hump.’ If I’d lost that fight (to Davis), people would have said, ‘He’s not ready. He doesn’t deserve to be back in the UFC.’ There would have been so much negativity coming toward me, just like it was when I got cut from the UFC, I probably wouldn’t have lived it down.” 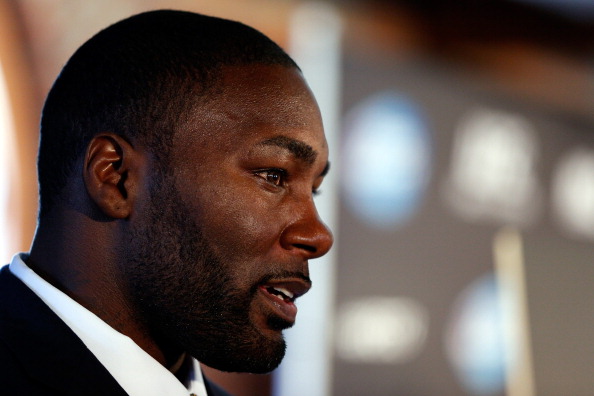 It didn’t mean his problems were over. On the contrary, new ones were looming.

It’s not a subject Johnson likes to rehash, but just five months after he rejoined the UFC, he was floored by a claim of domestic violence by a woman he had dated. Suspended by the UFC, he hit an emotional bottom.

The UFC hired its own investigators and found nothing. A civil case against Johnson was dismissed, and Johnson’s name was cleared.

But accusation and aftermath left him upset and confused.

“I don’t wish that type of lie on my worst enemy,” he said. “That, honestly, almost took me out. That almost broke me. That one lie almost got to me. I worked so hard and now here’s a person trying to take it away from me all because they’re not happy.” 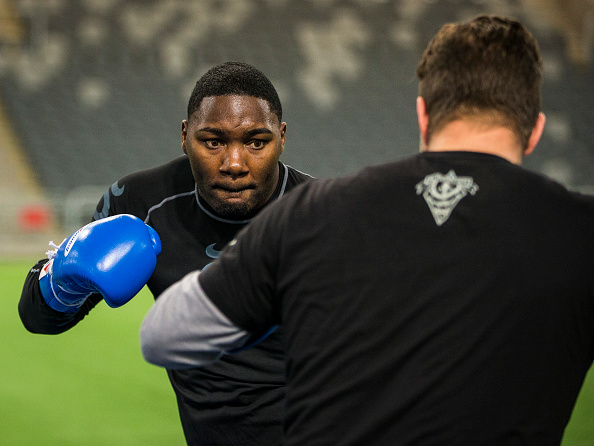 Getting through it was difficult. Johnson became a shut-in, preferring to avoid seeing people rather than risk ridicule. He feared he would be seen as something he wasn’t – an abuser.

“At first, I was really upset,” he said. “I went from mad to depressed. I missed training for a month straight. I just sat at home and didn’t do anything because I didn’t want people thinking I was this guy that I was accused of being.

In fact, he needed them. Returning to training with the Blackzilians steadied him, gave him back his foundation, made him feel whole again. He also had the support of his team and the UFC, which takes a strong stand against domestic violence. 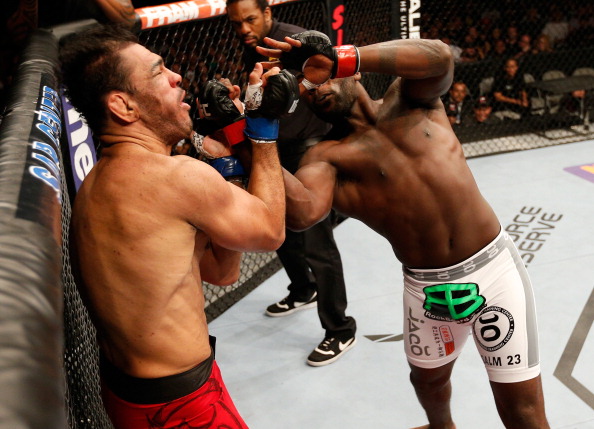 The UFC lifted its suspension as soon as Johnson was cleared.

“There’s nothing worse than when you’re being accused, especially of hitting a woman and it’s not true,” White said. “Once that’s put on you, it’s hard to shake. I absolutely can imagine what he was going through.”

Johnson knows he’s endured a lot, but on the other side of his troubles, he realizes how lucky he is.

“Unless somebody died and came back to life, nobody has been through the things I’ve been through,” he said. “But that makes me into the person I am today, and it makes me stronger mentally. It makes me focus more and work harder. I know this can be taken away from you in a split second. You can have it and it can be taken away.”

His rousing victory over Gustafsson came two months after charges were dismissed. His life has been on a constant upswing, and his preparations for Cormier have gone well. 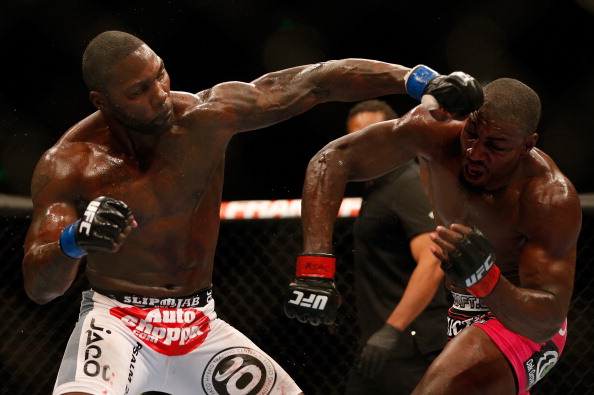 Although Cormier, the No. 3 contender, is a former Olympic wrestler, Johnson and Hooft decided not to bring in training partners who specialize in grappling. Johnson has an 85-percent success rate in his takedown defense, so Cormier could have trouble if his plan is to make the fight ground and pound.

Even so, there’s little question that Cormier wants to get Johnson on the canvas. He tried the same thing with Jones, although unsuccessfully.

“I don’t know what D.C. is going to do, but I think they’re going to take it to the ground,” Hooft said. “But Anthony is a strong wrestler too. He’s not an Olympic wrestler like Daniel, but he’s strong and he has very good stand-up.”

Johnson is a long way from his days as a bouncer in Reno and Los Angeles, a job he took during and after his days at Lassen Community College in Susanville, California. He had a scuffle or two, he said, but found the job much easier when he worked at strip clubs in L.A. 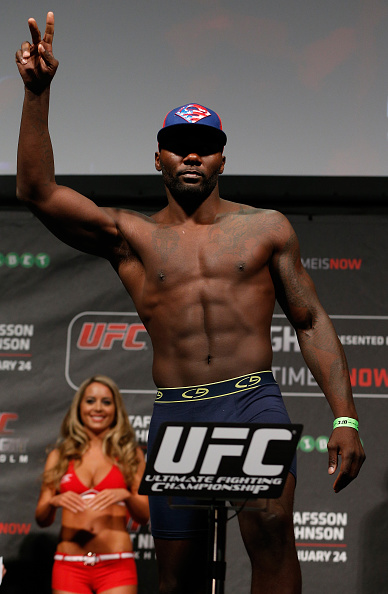 “There were never any fights at strip clubs,” he said. “Everybody’s just looking.”

All eyes will be on Johnson and Cormier on Saturday night. But regardless of who wins, the specter of Jones isn’t likely to disappear. When, or if, he comes back, the champion knows that’s a match waiting to be made.

“If you look at how he knocked out Nogueira, then how he knocked out Gustafsson, he’s knocking out top-five light heavyweights,” White said. “If he does that to Cormier, people are going to be dying to see Jon Jones come back and fight him.”

Johnson is ready. When life is good, there are no real problems.