“ The mental game is the most important part of fighting in my opinion. If you have that mental edge and mental toughness, you’ll be able to be successful in fighting..." - Anthony Johnson 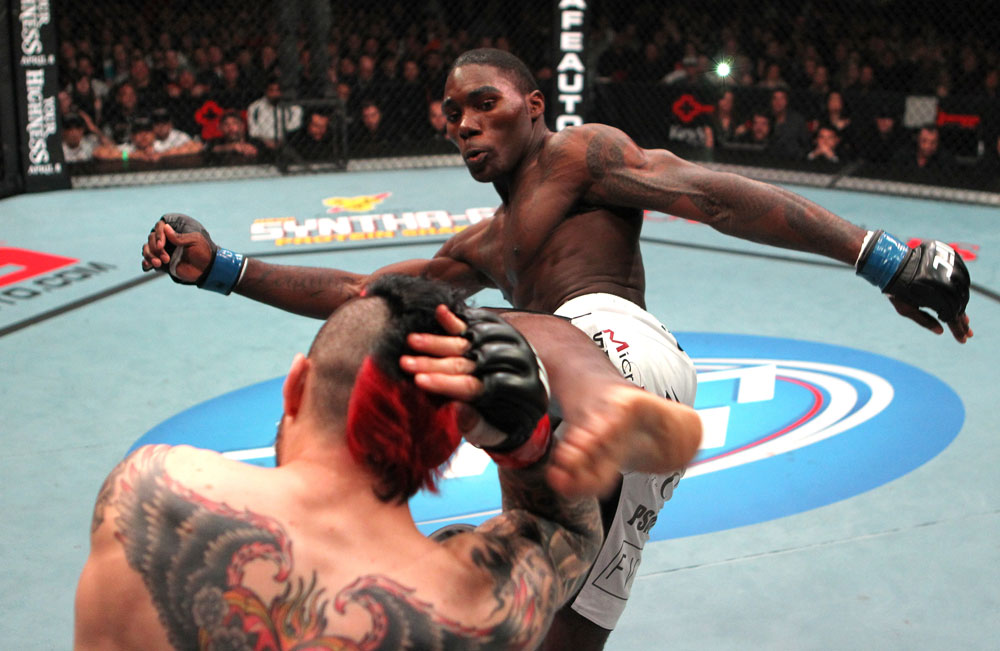 When it comes to sleight of hand and psychological warfare, Anthony Johnson’s defeat of Dan Hardy in March was a masterstroke. With all five of his previous UFC wins coming byknockout – and not just plain ol’ knockouts, but the ‘fall down in funny ways’ knockouts – Johnson’s claim that he was going to go toe-to-toe with “The Outlaw” wasn’t just greeted with cheers from fight fans, but from Hardy as well.

Then came the first takedown.  And the second. And the third. And you get the picture. For three rounds, Johnson baffled Hardy with the wrestlingskills that had earned “Rumble” an accolade many forgot he had – a junior college national championship for Lassen Community College. The shutout three round decision in Johnson’s favor when it was all over? A mere formality.

“I pretty much knew what I was gonna do,” said Johnson. “I just wanted to mess with him a little bit because I knew he was really wanting somebody to stand and bang with him. But why would I take a 50-50 chance? Even though I know I’m a better striker than him – nothing against his striking or anything – why take a chance of getting caught when I know I’m better than him on the ground?”

Sure, the win (Johnson’s ninth against three losses) isn’t going to earn him any nominations for Fight of the Year, but in terms of putting together a brilliant gameplan and sticking to it against a tough opponent, you can’t help but give him his respect. And when it comes down to it, he won the fight with his brain and not just his brawn.

“The mental game is the most important part of fighting in my opinion,” said Johnson. “If you have that mental edge and mental toughness, you’ll be able to be successful in fighting, no matter what skill level you’re at. It plays a big part, and fighting against Dan Hardy, it definitely worked to my advantage.”

As for the critics who were expecting thunder from “Rumble,” he takes such talk with a grain of salt.

“The true fans and true MMA analysts that understand fighting and know MMA, it shocked them, but they also respected what I did,” he said. “People who don’t know fighting and that just want to see people go in there and try to knock each other’s head off, they didn’t like it at all. They just want to see a bloodsport, and that’s not what MMA is all about. To me, this is my career, it’s my body, it’s my fight, and I’m gonna do what I’ve got to do to win. And if I have to play that psychological game with somebody, I’ll do that.”

To many observers, the Hardy fight showed the evolution of the 27-year old’s fight game. We already saw the fight ending power, speed, and explosiveness. In March we witnessed him taking a bout to the mat and controlling it there from start to finish. That’s something every welterweight in the UFC has to think about from now on, but the way Johnson looks at the whole situation, he’s not even close to where he needs to be.

“No, not yet,” said Johnson, who faces Charlie Brenneman this Saturday night in Washington, D.C. “I think this fight right here will show a lot with my takedown defense, takedowns, and striking. Each fight is a step forward and I think I get better and better in every fight. I think my performance against Dan Hardy was one of my worst ones, but after being out for a year, I came in and did what I had to do. But Charlie Brenneman’s really gonna bring out the fighter in me.”

That should be something to see, as Brenneman - fresh off his upset win over Rick Story in June - is on a similar mission to get by his opponent on Saturday night and start making some noise among the 170-pound elite. Johnson likes the matchup and his fellow wrestler’s style.

“He just goes after it,” said Johnson of former Lock Haven University wrestler Brenneman.  “I like his style of fighting and he’s real smooth. He keeps coming forward, his wrestling is so good, and he puts it together really well. I saw his fight against Rick Story and he had a gameplan that is almost the same one for everyone he fights. He might take a couple punches, but he’ll grab a leg and hold on to it for dear life just to get that takedown. And he’s pretty accurate with his takedowns. He’s one of those guys that if you don’t stay on your toes and move and get the job done, then he’ll beat you with his takedowns.”

And though Johnson isn’t predicting that a wrestling match will break out in the Nation’s capital, he does admit that when one wrestler faces another, there’s always a little something extra to prove.

“We have to be like that,” said Johnson. “Charlie Brenneman feels his wrestling is better than mine, and I feel mine is better than his, and that’s just where we’re at. We’re two competitive guys who come from the toughest sport in the world besides MMA, and that’s just how we think. But do we take our opponent’s talent for granted? No, not at all, because we know that one takedown could be a win or loss for a round. It’s gonna be fun and I’ve got a lot of respect for Charlie and his camp.”

A win on Saturday would be his fifth in his last six bouts, with the only loss coming to Josh Koscheck in 2009. Of course injuries have slowed the Georgia native’s progress, but with the Hardy win and this week’s bout against Brenneman, he will be firmly back in the spotlight. There was also the business of a movie role earlier this year, as Johnson had a nice part in the film ‘Warrior.’

“It was cool,” said Johnson of being on the silver screen. “Being on set for the movie was great. (Director) Gavin O’Connor and (Producer) Greg O’Connor were great, and it was fun having the TapouT guys there, even though Mask wasn’t there, and he was the whole reason I was in the movie. Those guys did such a great job, and they let the actors do the acting and the fighters do the fighting. They didn’t try and make a fighter be an actor, but when it came down to the fighting scenes, they actually took our advice whenever it came down to how it would look or how it would be in a certain situation or which move would actually look like a real MMA move. And that was cool because they were willing to listen to us and get our two cents. I think that’s what made it such a good movie. The writers did a really good job, the actors did such a good job, and it was unbelievable.”

So are we about to lose Johnson to Hollywood? He laughs.

“Acting is not my thing, but if it came down to it and somebody offered me another role, I would do it,” he said. “It’s actually pretty fun when you’re on set and you know people and everybody’s cool like they were on the set of ‘Warrior.’ But that (acting) is a lot of work.”

It’s safe to say that he prefers his day job to long hours on the set, and he’s more than ready to hear the referee call “action” this Saturday night. And whatever the future brings, he’ll deal with it then.

“I don’t really think about where this fight puts me, I just try and fight and keep it moving until my time comes,” said Johnson. “For the longest, I’ve been looking to see my name up there in the Top Ten, and I can’t complain that I’m not in it because I still haven’t paid my dues and I haven’t done what I need to do to be noticed as a Top Ten fighter. So we’ll see what’s next for me after this fight, but my goal is to win and keep going forward.”