"Now I feel like I’m an actual fighter. Now I know that I know how to
fight and now I’m putting it all together with my athletic ability and
everything is working." - Anthony Johnson 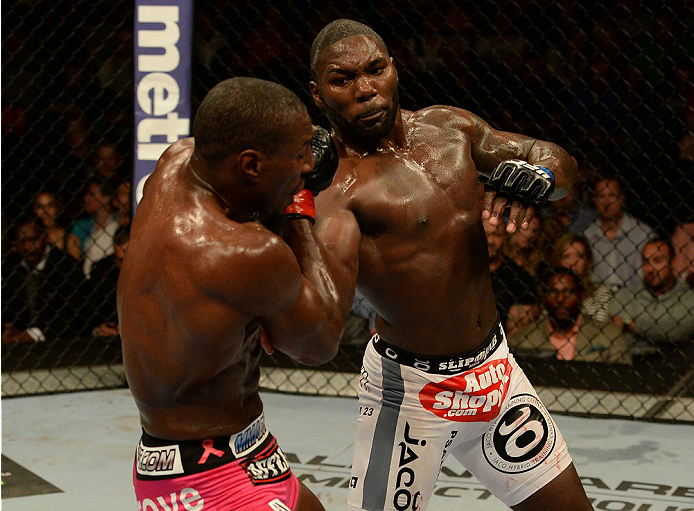 There is a line in Canadian novelist Margaret Atwood’s 1988 novel Cat’s Eye that serves as a fitting tagline for the rise, fall, and comeback of current UFC light heavyweight contender Anthony Johnson: “Potential has a shelf life.”

You don’t need to know the context of the quote in the story or even anything about the book at all to understand how true the statement is. Sports are littered with top draft picks that didn’t pan out and solid journeymen that should have enjoyed even more substantial careers, except for one reason or another, that just wasn’t in the cards for them.

Mixed martial arts is no different.

Over the years, several “can’t miss” talents have done exactly that, while countless other fighters that appeared destined for big things never made the jump to the next level. Whether they didn’t shore up a weakness or round out their skill set, the results pages are filled with names of fighters that never managed to maximize their potential.

For a number of years, Johnson appeared destined to join that group.

Everyone that saw him compete could see the raw skills and tremendous athleticism, the fierce power and surprising quickness, the championship potential of a six-foot-two-inch-tall welterweight with a penchant for knocking people out. But his size also stood as a hazard.

To say making weight was difficult for Johnson is akin to saying there was a little dust-up at The Alamo.

He routinely needed to cut down from well over 200 pounds in order to reach the 170-pound limit, stubbornly refusing to change his approach between fights or consider a move up in weight to avoid the grueling pre-fight process. Every fight, breakdowns of his chances carried a caveat – “If he’s able to make weight” – and on two occasions, Johnson missed the upper limit and forfeited a portion of his earnings to the commission.

After earning a first-round knockout win over Charlie Brenneman in October 2011, Johnson decided to move to middleweight and was tabbed to take on Brazilian star Vitor Belfort in the co-main event of UFC 142.

Everything that applied at welterweight carried over with the move to the 185-pound weight class. The athleticism and potential was still the same, but the “if he’s able to make weight” caveat followed him as well, though most didn’t anticipate him having any problems.

His body began shutting down on him during the weight cutting process, forcing him to abandon the cut and rehydrate. He ultimately weighed in at 197 pounds. The bout was fought at a catchweight with the stipulation that Johnson could not be more than 205 pounds on fight night.

The following evening, Johnson was submitted in the opening round and shortly thereafter, his contract with the organization was terminated. As far as the UFC was concerned, his potential had passed its expiration date.

Eight months after his loss to Belfort and following a second missed attempt at making the middleweight limit, Johnson decided that his fighting future was at light heavyweight and he hasn’t looked back since.

“I just had to put on my big boy pants and start going in the right direction,” laughs Johnson as he heads to San Jose, where he faces Antonio Rogerio Nogueira in the co-main event of Saturday’s return to FOX.

“When you start spiraling down, you have to remember where you come from and remember all the things you learned and were taught in life, and you don’t want to see your friends, your family or anybody like that suffering more than you are when you’re the one that caused it.

“When I missed ’85 for the second time (against David Branch in 2012), I knew my body was changing – it wouldn’t allow me to drop under 200 and when I did, I was hurting… bad. So it was time to make that change. I couldn’t keep suffering like that – my coaches watching me in the sauna like I’m dead. That’s not a good look for anybody.”

The Lassen Community College product would defeat Branch and rattle off five more victories, including a win over former UFC heavyweight champion Andrei Arlovski, a conquest that speaks to just how much of a physical transformation Johnson would have to endure to make the welterweight limit earlier in his career, as he didn’t look at all out of place trading leather with “The Pit Bull.”

Following his January win over veteran Mike Kyle, whispers of a possible return to the UFC began circulating and Johnson was ultimately brought back into the fold to face off with Phil Davis at UFC 172.

”The careers in mixed martial arts aren’t that long in my opinion,” says the now 30-year-old Johnson, who carries a 17-4 record into his nationally televised encounter with the Brazilian veteran this weekend. “I was just like, `It’s time to really go ahead and give this thing a push.’ After being released from the UFC, I just had to kick my own self in the behind and I started to get my stuff together.

“I’ve been known as one of those guys that has the potential to give any champ a run for their money, but my weight was in the way,” he continues, acknowledging the description that has been affixed to him since the beginning of his first run in the UFC.

“When I was younger, I really didn’t care as much either. That’s again where I started maturing because now I care. Back then I was an athlete that started learning how to fight. As an athlete, I felt I could get away with everything because of my athletic ability. It didn’t matter if I could fight or not.

“Now I feel like I’m an actual fighter. Now I know that I know how to fight and now I’m putting it all together with my athletic ability and everything is working.”

He made a triumphant return to the Octagon back in April, dominating Davis from start to finish en route to a unanimous decision victory that immediately vaulted him into the title conversation in the light heavyweight division.

The 15-minute affair showcased Johnson’s complete arsenal and once again put his complete arsenal on display, as he turned aside Davis’ takedown attempts with relative ease and battered the former NCAA Division I National champion on the feet. In returning to the UFC and pushing his winning streak to seven, “Rumble” started down the road to finally realizing his full potential.

“It felt good and I’m blessed to be in the position that I’m in. Not many people know that I know how to use my wrestling, but I use my wrestling to keep a fight standing. A lot of these guys that wrestle want to use their wrestling to take the fight to the ground, but I’d rather keep it standing and see who lands the big punch.

“I still felt like I made mistakes,” he adds. “I felt like I could have done much better. I should have knocked him out, in my opinion, but Phil’s an athlete and he doesn’t get hit often. He’s a hard guy to hit – he definitely knows how to dodge a punch and a kick pretty well.”

Johnson lets out a laugh and it’s a testament to where he is in his career.

Two years ago, a pre-fight interview four days prior to stepping on the scale at weigh-ins wouldn’t have contained laughter. The detailed, honest insights he’s provided here would have been replaced by short, sharp jabs at answers – a couple compact sentences repeated on every call, his mind fixated on the struggle to make weight that awaited him.

Those worries are gone.

What remains is a man that has taken the circuitous route to finding his place in the sport and one that is now ready to make the most of his immense skills and natural abilities.

“I knew my talent and my true potential was there – it was just a matter of when I was going to open up and let it come out.”

Turns out his potential hadn’t passed its shelf life after all.