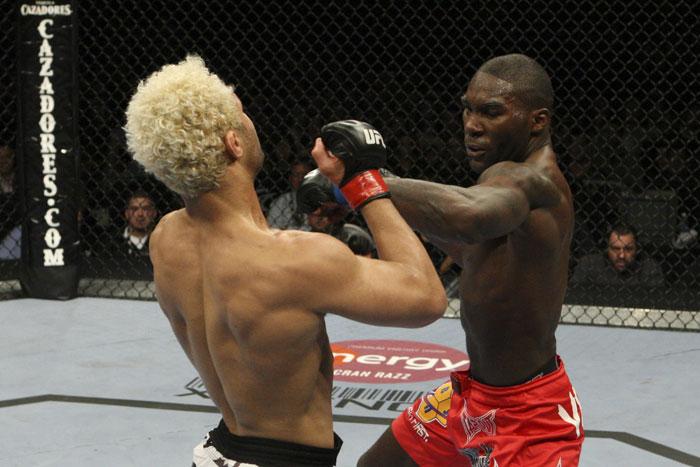 Despite coming off a knockout loss in his last fight against Carlos Condit, welterweight contender Dan Hardy didn’t hesitate to accept a bout with feared striker Anthony “Rumble” Johnson that takes place this Saturday night in Seattle.

When this topic is broached with Johnson, the typical fighter response could run along the lines of ‘yeah, I knew I had him when he signed the contract’, or declarations of how his impending knockout of “The Outlaw” will be even faster than Condit’s. But instead, the Georgia native flips the script, almost sounding offended.

“That’s not Dan,” he said. “Dan is a fighter, he’s a competitor and he wants to fight. He’s like me – he’s not gonna say no to any fight. So give the man what he wants.”

Johnson’s not done yet though.

“He’s a hardcore fighter,” said Johnson of his opponent. “I can’t say I’m a fighter; I’m an athlete that turned into a fighter. Hardy was born a fighter. I respect that more anything. I don’t know if he’s from the streets, but when you’re hardcore and just want to fight, fight, fight, whoever he fights is gonna have a problem because that’s what they live, breathe, and eat. I’m an athlete that loves competition. I don’t want to get hit in the face. (Laughs) Who wants to get hit in the face? That hurts. But Hardy’s game, and if I have to take a punch to get mine in, then so be it. That’s competition, let’s get it on.”

Well, now we’re the ones who should be offended, because if the 27 year old Johnson has proven anything in his life and MMA career, it’s that he’s a fighter.

Raised on a farm in Dublin, Georgia by his grandparents, Johnson didn’t get any favors growing up, but his scrappy attitude and athleticism led him to a Junior college National Wrestling Championship for Lassen Community College and to three MMA wins before he got the call to the UFC in June of 2007. Despite his inexperience, he had the tools to overcome that against Chad Reiner, who he knocked out in 13 seconds, and though he lost his next bout against veteran Rich Clementi, wins in four of his next five bouts, all by knockout, sent him flying up the welterweight ranks.

Then came his November 2009 bout with Josh Koscheck. Johnson started the UFC 106 bout strong, but after he landed an illegal knee in the first round, Koscheck got a break to regroup and Johnson’s mind wandered. It was a costly mistake, as he went on to lose the fight, getting submitted in the second round.

“I lost focus and I beat myself before he beat me,” he said. “Once the knee went down, I completely lost it. But it’s over. He won at the end of the night and he choked me out. It is what it is, I’m past that, and I learned from that and how to stay mentally focused and composed in a fight instead of letting somebody get under my skin. That’s never really happened with me in a fight, but that time it did.”

Johnson would have a lot of time to learn that lesson, as a subsequent knee surgery took him out of a March 2010 bout against John Howard and forced him to the sidelines. This weekend’s fight will be his first since Koscheck.

“It sucked pretty bad,” said Johnson of the layoff. “I see these guys fighting and I’m like man, if I was in there I could whup these guys’ asses up and down the cage and I know it, just by the way I’m watching them fight. But it’s different whenever you’re sitting down and watching it from the outside than when you’re in there. I felt like I missed out on a lot of money and great opportunities to fight good people, but things don’t happen before they’re supposed to, so I know my time is coming, starting with Dan Hardy.”

This patience and maturity didn’t just come overnight. For Johnson, it took the almost 16 months he’s been away to achieve. So even though it’s a cliché, maybe his injury was a blessing in disguise.

“I think I’ve matured a lot,” he said. “Sitting on the sidelines made me realize that you’ve got one life to live and you’ve got to go and do the very best that you can and don’t take no for an answer. Don’t worry about the past, only focus on the present and the future. So that’s all that’s in my mind.”

Johnson has even let the jokes and insults about his weight gain slide off his back. A big 170-pounder, “Rumble” has had his public battles with the scale, and while he was off he sailed past the 200-pound mark. But he’s got something to say to the skeptics who insist that there’s no way he hits the welterweight limit this week.

“I’ve got people worried about my weight, which is fine. I like that because they’re keeping my name in their mouth and I’m in their head. I love to prove the haters wrong right now. I know where I’m at right now and me and my trainers know what it’s gonna take (to make weight). We know that after all the hard work we put in, we ain’t gonna come out and be a failure with this weight stuff.”

Is this a kinder, gentler Anthony Johnson? Well, he’s always been a nice guy, but will this new version be less than ferocious in the Octagon on fight night? Well, you can guess the answer to that one, and it’s one that he picked up from one of his fighting heroes, Wanderlei Silva.

“Outside of the cage, he’s a man, he’s a gentleman, a cool guy and great trainer, but inside the cage he’s a beast and a great fighter,” said Johnson of ‘The Axe Murderer.’ “He’s amazing in the cage, and he knows when to turn it on and turn it off.”

“When I know I hurt you,” he said. “That’s when I become a serial killer. It’s just that on and off switch that you gotta have.”

And at 170 pounds, you’ll need to have your finger on that switch at all times because you never know when your number’s going to be called. Johnson likes that part, and after being away for so long, he’s ready for anything.

“At 170, it’s a dog eat dog world, and we’re coming hard,” he said. “It’s everybody’s ballgame right now. GSP (Georges St-Pierre) has done his thing and I admire the guy. At first, I only admired Wanderlei and Anderson Silva, but man, GSP is just phenomenal. Amazing guy, amazing talent, and amazing heart. He’s one in a million. He’s the man and he’s gonna hold that title for a while, in my opinion, until I get to him.”

Johnson laughs, knowing that bravado is nothing without the tools to back it up. Well, he’s got them in the form of his two fists and he knows it, and in a couple days he gets to swing those fists once again. That’s been a long time coming.

“I want people to say that I haven’t missed a beat at all and that I’m back, I still have that power, still have that speed, and that I’m still the guy to watch out for,” said Johnson, who was quick and to the point when asked what he missed the most since his last bout in 2009.