Anthony Johnson: 'DC didn't break me; I broke myself'

When most people think about the first fight between Anthony Johnson and Daniel Cormier at UFC 187, one of the first things that come to mind is the looping right hand that put Cormier on the canvas just 28 seconds into the opening round.

A lightning quick jab pierced Cormier’s guard before the thunderous overhand chased it home, taking the feet out from under the American Kickboxing Academy product and sending a jolt of electricity through the MGM Grand Garden Arena. As they prepare to meet for a second time this weekend in the main event of UFC 210, that initial blow and the trio of punishing knockout finishes Johnson has amassed since stand as Exhibits A through D for pundits and fans making the case for a new champion being crowned in Buffalo.

While the impact of that blow and Johnson’s destructive power are the explosive fuse wrapped around Saturday’s main event rematch, it’s everything that transpired immediately following that connection that momentarily eliminated Cormier’s ability to stand that remains at the forefront of the challenger’s mind heading into the sequel.

Frustrated by his performance and knowing that he made mistakes inside the cage, Johnson went roughly six months without watching the tape of his first meeting with Cormier before a restless night prompted him to press play, study the film and examine the decisions that resulted in him coming away on the wrong side of the result the first time around.

“I think I was too afraid to watch it because you never want to see yourself making the mistakes that I made in the fight because they were so critical,” the challenger explained. “It was eating at me the whole time and in the middle of the night, I was like, ‘Screw it!’ and decided to watch the fight.

“I still look at it and think, ‘That’s not me out there.’ It’s more of a disappointment because of my performance, not even the fact that I lost; just my performance. That’s the main reason why I didn’t want to watch it, because I wasn’t myself.”

He points to the sequence following the knockdown, where he rushes forward slinging wild shots as Cormier quickly gathered himself only to have the standout wrestler slip behind him and take his back, as a mental error, one of several that contributed to his demise.

Though it took him several months before he was able to re-watch the fight with Cormier, Johnson didn’t spend any time licking his wounds on the sidelines or dwelling on the defeat. Four months after the bout, he was back in the Octagon collecting a second-round knockout win over current contender Jimi Manuwa before needing just 99 seconds to finish Ryan Bader and Glover Teixeira in his two 2016 appearances.

After starching the Brazilian in August, Johnson respectfully asked Cormier for a rematch and the champion was happy to oblige, only to have the bout postponed when “DC” suffered a leg injury just a handful of days before they were set to clash at UFC 206 in Toronto.

Now the contest shuffles down the QEW and across the Peace Bridge to KeyBank Center in Buffalo, where “Rumble” aims to rebound from his only loss in the last five years and earn a measure of revenge against Cormier.

“When I lost to DC, it opened up a whole other chapter in my life. It made me see things a lot differently because the things that I was doing back then, they were working for that moment and that time. Not taking any credit away from any of the fighters I fought before DC, but I never had to use anything that I had been taught with the jiu-jitsu and that type of stuff.

“I’m not a jiu-jitsu fighter; you don’t see me out there trying to throw an armbar on anybody. The day you see me throw an armbar, that’s probably the day I retire.”

While the challenger cackled at the notion of him becoming a submission fighter, it also underlines the blessing and the curse that carrying such prodigious power can be inside the cage. 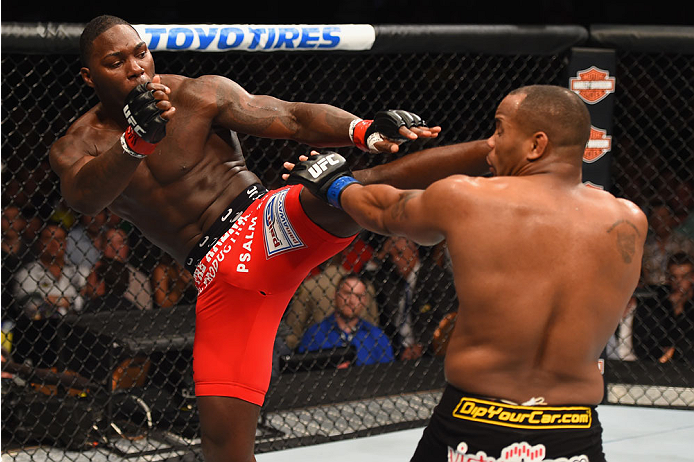 In many instances, both during his initial time competing in the UFC as a welterweight and the five years since, Johnson has only needed that one shot to land clean for his night of work to be over. Having legitimate one-shot knockout power is an immeasurable trump card to carry into the Octagon and Johnson might very well be the most devastating striker on the entire roster, but when those big shots land and the fight doesn’t end, staying composed and avoiding mistakes are crucial.

Johnson was unable to do that the first time and it cost him, but the challenger has no intention of making the same mistakes again.

“When I lost to DC, the moment I stepped out of the cage, I was already thinking of what I needed to do to win, to beat him, to beat somebody at that level because I was right there scratching at the surface,” he said. “I’m still there, but I’m about to break some ground.

“With the training that I’m doing now, with the coaches that I have in my corner, it’s amazing. They got me ready. They have me ready and they have me right. Everybody is pretty excited for what’s about to happen.”