"I got that on and off switch. I’m gonna pull that trigger, hit that switch, and make sure I get the job done." - Anthony Johnson 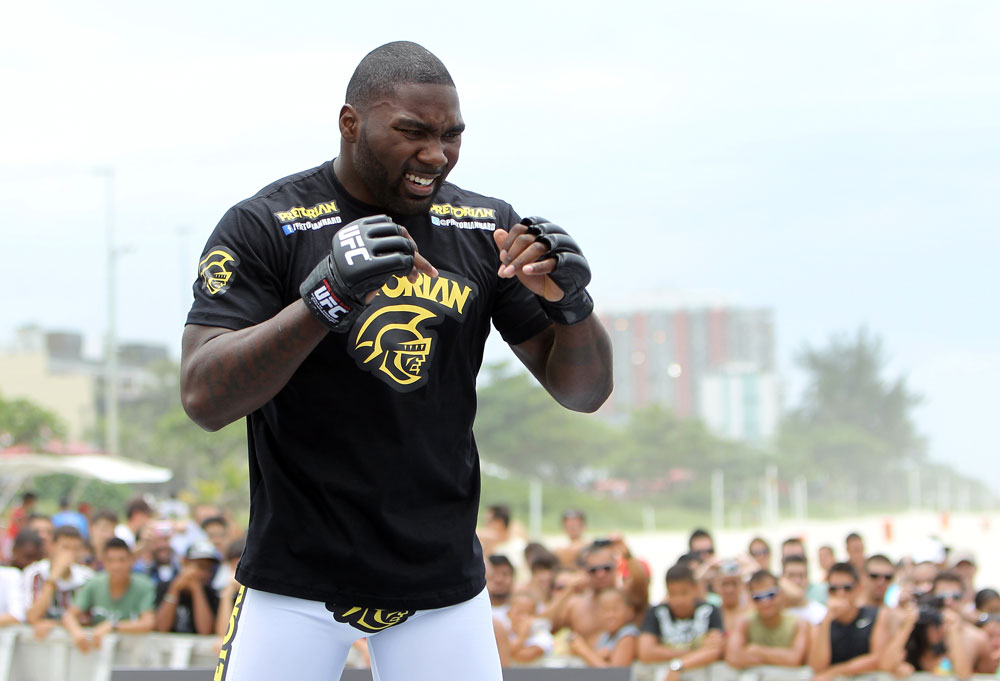 Anthony Johnson didn’t need any more motivation than he already had for this Saturday’s UFC 142 bout against Vitor Belfort. “Rumble” was going to be making his middleweight debut after a long run at 170 pounds, he was facing a legit superstar and former champion, and he was doing it in a Pay-Per-View co-main event.

But then he watched a clip of Belfort from the Countdown to UFC 142 preview show, and everything clicked even more.

“In one of the clips, Vitor said that we’re gonna see a lion January 14th,” recalled Johnson. “Well, that’s the one thing my granddad told me right before he passed. The week he passed, he said to fight like I’m fighting a lion across the cage. When I heard that from Vitor’s mouth, I said thank you. I’ve been waiting on this lion a long time.”

It’s almost as if this fight is his destiny, and in a lot of ways it is. Long considered one of the top prospects in the welterweight division, Johnson was also seen as one of the biggest fighters in the weight class, one whose ability to make 170 pounds was almost as spectacular as one of his many highlight reel knockouts. Yet after he seemed to get into a weight cutting rhythm and started to make moves on the top guns in the division, his move to middleweight was announced.

“I like to keep people on their toes,” he laughed. “I don’t like to be what people think I am.”

In his eyes, it wasn’t a conscious decision to move 15 pounds north; he just received the offer to fight Belfort and ran with it.

“To me, any time would have been the right time. The UFC presented me with the chance to fight Vitor, so why not? You don’t really get many opportunities in life, and when you do, you need to take them. I just saw it as a great opportunity for me, and right now, I’m fighting at 185, so my focus is there. 170 hasn’t really popped into my head at all. After the fight I don’t know what I’m gonna think, but right now, I haven’t thought about going back down or doing anything else except fighting.”

Does he feel the difference?

“Yeah, I’m not hungry,” he deadpans before breaking out into a laugh. But Johnson’s move north is no laughing matter to the middleweight division. Not only will he be coming into fights with a boost of energy from not having a drastic weight cut, but he’s likely to have an edge in speed on his foes while still retaining his power. Add in his underrated wrestling and he’s a tough puzzle for any 185er to figure out. Even Belfort admitted in a pre-fight interview that he doesn’t know which version of Johnson is going to show up – the wrestler or the striker. Johnson likes being this international man of mystery.

“I love the fact that I’m in the back of their minds and they don’t know what I’m gonna do, and I’m gonna keep it that way,” said the 27-year old. “I’m gonna keep the fans, my coaches, and my opponents guessing. My coaches don’t even know what guy’s gonna show up at practice (Laughs) – the wrestler or the striker. I just like to mix it up, and in my opinion, that’s how you beat people. I’m gonna use all of my strengths – wrestling, striking, jiu-jitsu, I don’t care; I’m coming hard.”

And he’s ready for whatever Belfort shows up as well, whether it’s the explosive and aggressive striker or the more measured counterfighter who waits for his opponents to over commit.

“He’s an extremely fast, good fighter,” said Johnson of the former UFC light heavyweight champion. “But this is a fight. I’m gonna go in there and do what I do and stick to my plan and fight the way I’ve always been fighting, and that’s using my speed, using my power, and just getting the job done. Vitor’s a phenomenal fighter, but I can do things just as good as he can. He thinks he has speed, well I have speed too. He thinks he has power, I got that too. So if he wants to go tit for tat, we can do that.”

Anyone who has seen Johnson fight over the course of his nearly five year UFC career will attest to his willingness to scrap and his killer instinct. Yet his vicious knockouts of Charlie Brenneman, Yoshiyuki Yoshida, Kevin Burns, Luigi Fioravanti, Tommy Speer, and Chad Reiner are in stark contrast to his out of the Octagon demeanor, where he is laid-back and always quick with a joke or one-liner.

“When I fight, I don’t care what’s around me,” he said. “I’m there to do my job and I got somebody in there that’s trying to take my life, and that’s what I feel, so I’m gonna try my best to take the other person out. I got that on and off switch. I’m gonna pull that trigger, hit that switch, and make sure I get the job done.”

The Jekyll and Hyde switch does come as a surprise to new acquaintances, but to Johnson’s family back in Georgia, they saw the roots of “Rumble” early on.

“I used to beat up my cousin’s teddy bear all the time,” he laughed. “And teddy bears don’t punch back, but I was throwing that thing all around the house and doing some WWE-type stuff. I was body slamming it, jumping on top of it, punching it. I guess I was in training at a young age. So it doesn’t surprise them. I’m just that little kid that they saw growing up who’s on TV now and doing it for real.”

Years later, Anthony Johnson is on the verge of big things in the UFC, and to move even closer to his goals, he’ll have to pull out the “Rumble” side of his personality not to fight a bear, but a lion.

“When you fight a lion,” he said, “you gotta be on point, you gotta be sharp, and you gotta beat the lion to the punch in every single way and outsmart the lion.”