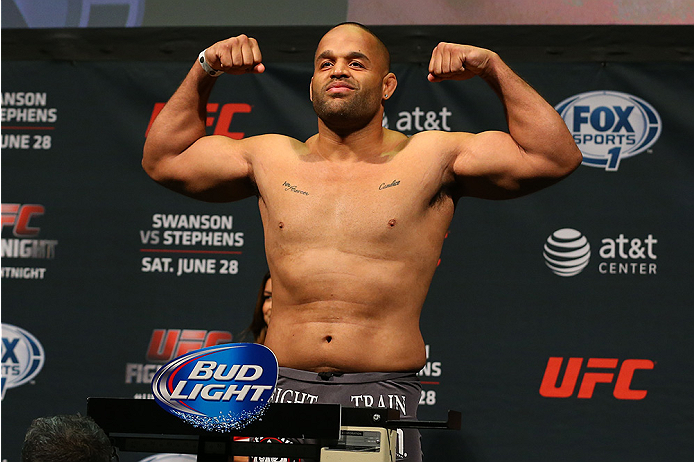 On a chilly Las Vegas night back in December of 2007, the future heavyweight decided to up the ante on his growing obsession with mixed martial arts and take in his first live UFC event. The Seattle native had long been a fan of the surging sport, but he wanted to see the action inside the Octagon up close and personal. Like most fight fans, Hamilton frequently tuned in to watch events from the comfort of his living room, but as it’s been said time and time again throughout the organization’s 21-year history, there’s nothing quite like experiencing a UFC event live and in the flesh, and Hamilton wanted to take everything in firsthand.

That said, what he saw that night at UFC 79 absolutely amazed him and backed up every drop of expectation he’d carried into the experience. In addition to what turned out to be a solid night of fights under the bright lights of the Mandalay Bay, the card also featured two bouts that would ultimately turn out to become legendary affairs. Future welterweight king Georges St-Pierre would conclude his trilogy against his longtime rival Matt Hughes in the main event, and in the co-main event slot, the long-awaited slugfest between Chuck Liddell and Wanderlei Silva not only turned into the best fight of 2007, but one of the greatest tilts in UFC history.

While the then 27-year-old “Emerald City” representative would still be three years away from entering the professional ranks and becoming the “Freight Train,” sitting in the stands at the Mandalay Bay that night carried special significance for him. And especially so now that he prepares to be on the other side of the equation in the same arena at UFC 181.

Seven years ago, Hamilton was a spectator to the excitement that went down inside the Octagon, and on Saturday night, the 34-year-old heavyweight will be the one with all eyes on him when he steps in to trade leather with Todd Duffee. Those circumstances have the Jackson / Winkeljohn-trained fighter nothing short of electric with anticipation and have brought the seven years he’s traveled to reach that moment into an emotional perspective.

“Oh man, I’m so pumped up for this,” Hamilton said. “As fighters, we dream for these moments and these opportunities. To be a part of this card at the Mandalay Bay in Las Vegas is something I’ve dreamed about. My very first UFC event I ever saw live was there seven years ago and I remember sitting in the stands thinking how awesome it would be to fight there and to fight for the UFC. Now, here we are seven years later, and I’m in that exact situation. It’s amazing and I can’t even explain the feeling.

“It’s literally a dream come true and a blessing to be a part of all of this. It’s seven years later and I definitely believe that’s a lucky number. I’m hoping to go out there and get this win and keep the ball rolling.”

When Hamilton talks about momentum, it’s certainly something he’s had in large supply as of late. While he did stumble in his UFC debut back in June, he rebounded in spectacular fashion by defeating Ruan Potts two months later to pick up his seventh victory in his past eight outings. Furthermore, Hamilton’s win at UFC 177 was his first inside the Octagon, and a victory of that particular variety is special for every fighter who has ever earned their way to the sport’s biggest stage.

“First of all it’s like a dream come true just being in the UFC, and then getting that victory and being able to go out there and finish the fight like I did was awesome,” Hamilton said. “I was overcome by emotions immediately after because of all the hard work and sacrifices just to get to that point was a lot. Then to have it go the way it did was amazing.

“Every bit of this experience is incredible. Being out there with those great fighters and being a part of this organization is amazing. Having Dana White talk to us before the fight and having Bruce Buffer announce your name are all the little things that made all the trouble to get to that point worthwhile. Hearing (site coordinator) Burt Watson get himself all fired up - and I don’t know what any of the other guys were feeling - but I was feeding off of that energy and intensity. I was so pumped up after he gave his little speech that I knew I was going to go out there and put it all on the line.”

Hamilton will be looking to do the same thing when he steps in to mix it up with Duffee this Saturday night at UFC 181. After taking his first successful step into the UFC ranks back in August, he’s eager to take an even larger jump up the roster with a victory over the massive heavyweight powerhouse due to the notoriety of the 28-year-old Indiana native.

Where the American Top Team product was once the hottest prospect in the heavyweight ranks due in large part to earning a seven-second KO of Tim Hague in his promotional debut, the highly touted slugger would hit rough waters shortly after. A pair of losses in his next two showings and a series of injuries put his once promising career in jeopardy, and doubt lingered whether or not Duffee would ever compete inside the Octagon again.

Yet, while he would make a successful return against Phil De Fries at UFC 155 in 2012, another rash of injuries would keep him on the sidelines for the next two years. Duffee’s long road back will come to an end at UFC 181, but Hamilton is determined to make the fight HIS success story on Saturday night. He knows Duffee is going to bring some serious challenges directly to his front door, but Hamilton believes he’ll be able to answer the call with danger of his own.

“I’m not taking anything away from him not fighting for past two years,” Hamilton said. “I don’t think he’ll be any less of a guy than he was when he won his last fight two years ago. I think he’s going to be even more hungry and come out looking to make a statement with this being his first fight back. I’m expecting the best Todd Duffee there’s ever been.

“I told (UFC matchmaker) Joe Silva in an email that this was going to be the Fight of the Night. We both have power in our hands and we are looking to go out there and put on a show. With Duffee’s ability to throw big punches on his feet it’s going to be a dangerous fight for me, but at the same time, if I can get him down on the mat it will be a long night for him. There is no way this fight goes three rounds.”