Ansaroff confident after Nunes said she'd be next champ 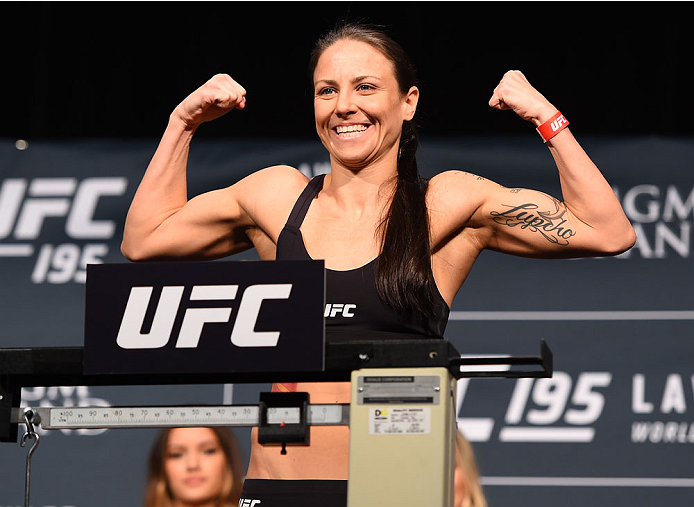 No one would fault Nina Ansaroff if she said she was a bundle of nerves and feeling a ton of pressure heading into her showdown with Jocelyn Jones-Lybarger in the UFC FIGHT PASS Featured Bout on Sunday evening in Phoenix.

Competing for the first time in a year, the 31-year-old American Top Team product is still in search of her initial UFC win, having fallen on the scorecards in each of her previous two outings. In addition to wanting to avoid an 0-3 start to her time competing in the Octagon, Ansaroff is also the “road team” for this weekend’s contest, as Jones-Lybarger resides in the Phoenix area and represents The MMA Lab, the Glendale, Arizona fight gym headed by John Crouch.

Oh yeah – there is also the pesky matter of her long-time girlfriend, UFC women’s bantamweight champion Amanda Nunes, using her time on the microphone at the close of two of 2016’s biggest events to tell everyone watching that Ansaroff was going to be the next women’s strawweight champion.
RELATED: Partner in life and in the gym, Nina Ansaroff talks Amanda Nunes | Ansaroff fighter bio | Matchup with Jones-Lybarger

Ansaroff laughs before the question is even completed; she’s likely heard it dozens of times in the buildup to this fight and hundreds more since Nunes first proclaimed her to be a future champion after dethroning Miesha Tate to win the women’s bantamweight title at UFC 200.

“I wouldn’t say it puts a lot of pressure on; rather it helps me believe myself in what I’m capable of,” Ansaroff said of Nunes’ public declarations that she will soon follow in her footsteps and claim championship gold for herself. “She trains with me every day and she knows what I can do. I know what I can do.

“I just feel like the timing has been off – I’ve been dealing with injuries – and that’s how life works. Sometimes things don’t go your way, but I feel like now is that time. I know what I can do and I’m ready to do it and she does as well.” 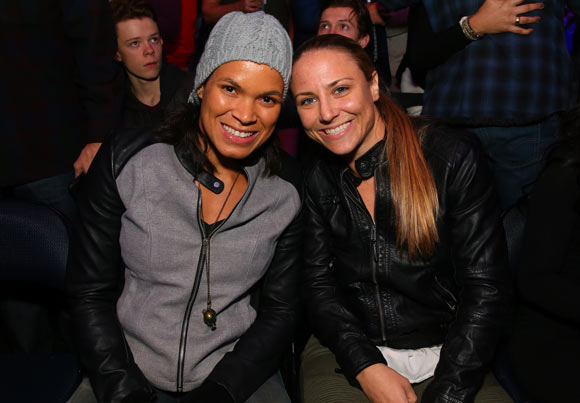 in the gym at American Top Team. While the former hasn’t had an opportunity to showcase her skills since losing to Justine Kish at UFC 195 last January, the latter used the previous year to showcase her continued improvement and rise to the top of the women’s bantamweight ranks.

Ansaroff was there every step of the way, serving as Nunes’ chief training partner and working her corner during her victories over Valentina Shevchenko, Tate and Ronda Rousey.

“I feel like it was somewhat of a blessing in disguise,” Ansaroff said of her 2016 campaign. “I got injured in January of last year – the beginning of 2016 – and 2016 happened to be the most busy and amazing year for Amanda and I feel like it was easier for me to concentrate on her and what she needed while I was kind of forced to sit on the sidelines.

“I started training for her first fight in 2016 – in March with her – to help her get ready for that fight and although I felt that I was good to go, the doctors still wouldn’t clear me, but I’ve been training the whole time and I’ve been ready the whole time.

“Seeing it and going through the journey with her has only made me more excited to get back in there.”

Nunes’ development since shifting camps and her ascendance over the last year is what fuels her unwavering belief in Ansaroff and while the returning taekwondo black belt hasn’t had as many opportunities in front of live microphones to state it publicly, she’s in lockstep with “The Lioness” when it comes to assessing her skills.

“We use the same coaches and we use each other; we train together, we spar each other,” said Ansaroff, explaining where that confidence comes from. “It’s the same thing, 20-pound difference.

“I feel like no one is ever going to hit me as hard as she has,” she added, detailing how the coaching staff in Coconut Creek sometimes asks the tandem if everything is good between the two due to the spirited, lively nature of their sparring sessions.

While there are myriad reasons Ansaroff could feel increased pressure in advance of Sunday’s fight, the reality is that the 31-year-old strawweight feels no different heading into her bout with Jones-Lybarger than she has in any of her previous 11 professional appearances.

“Fighting is something I love to do, but I’m also happy outside of that as well, so I don’t feel any pressure. I don’t feel like, ‘Oh my God – this fight is my life!’ Of course it’s super-important to me and I’m going to go there and give everything that I have, but I don’t put that pressure on myself like, ‘This is it for me.’ I feel like limiting myself to saying that is going to put more pressure on me, so the fact that it’s not is very okay.