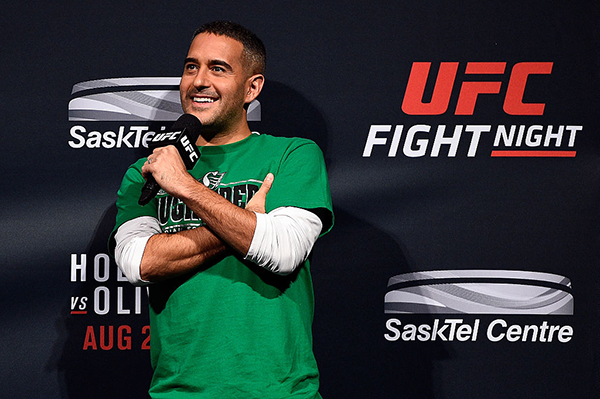 When Jon Anik joined the UFC in 2011, it was a dream job for the veteran broadcaster.

On Monday, Anik inked a new four-year deal to remain the play-by-play voice of the UFC and, once again, fantasy has become reality.

Truth be told, Anik couldn't imagine himself in any other role, because he considers that Octagonside seat where he calls the biggest fights in the sport his home.

"When I sat down to begin the process, I just couldn't imagine my life without the UFC being a major cornerstone of it," Anik told UFC.com on Monday. "I'm very thankful that things worked out the way they did.”

Following his addition to the broadcast team, Anik spent much of his first few years with the UFC on the road while traveling to destinations all around the globe.

In recent years, Anik has become the lead play-by-play commentator, which means he typically spends a little more time at home in the United States, but every experience both far and wide has shaped him to become the best broadcaster he could be.

"It's definitely been a whirlwind," Anik said. "I did 24 shows in Brazil and spent a lot of time away from the family. Since being elevated to pay-per-view, that has changed and a lot of the work has been domestic. When you get an opportunity to call a live UFC event, there's just nothing like it that I've experienced in pro sports.

Big congrats to @Jon_Anik on his contract extension with the UFC!! Couldn’t happen to a nicer, more professional broadcaster. Always a pleasure to work with you and can’t wait for the next one!
— Jimmy Smith (@jimmysmithmma) October 22, 2018

"To think about doing a college basketball game right now just doesn't have that pull for me, doesn't have that appeal. I've certainly done a lot of learning on the job and I feel like I have a much better understanding of mixed martial arts as a whole and the depth and everything else involved from when I first cracked a mic for these guys in 2011. It's been crazy. Working with 12 different analysts, I have so much respect for each and every one of them and they all bring so many different things to the table. It's been a crazy seven years."

The new contract for Anik also coincides with ESPN becoming the broadcast home of the UFC in 2019. ESPN is known as the worldwide leader in sports and Anik believes this is just another opportunity for the UFC to take a gigantic leap forward in overall growth.

"It's just a perfect scenario," Anik said about the UFC on ESPN. "There's a lot of people who deserve a lot of credit for it. The appetite for the sport right now is greater than it's ever been. The fact that the UFC and MMA could grow to such an extent that ESPN would not only want to dip its toe into the water but take the entire U.S. television package is absolutely enormous.

"There have been so many milestones for Dana White and this company over the last 20 years, but it's just hard to think about anything topping this ESPN deal. It's a five-year deal, so there's a lot of work to be done. We've got a huge opportunity to prove ourselves and that begins in January."

Much like signing his own contract, Anik doesn't act as if the UFC landing on ESPN is somehow akin to winning a race. Instead, Anik prefers to think of his new four-year deal and the upcoming move to ESPN like the race is just beginning and it's time to get a great jump out of the gate.

"The work really isn't done," Anik said. "A big part of our focus is to take this thing to the next level and make everybody internally in Bristol, Connecticut and beyond feel like they made a really smart investment. To make those people feel about the sport the way that I have for so long."

Work is an interesting word when it comes to Anik's approach to calling fights.

Rarely does anyone see the kind of painstaking research and preparation that goes into a broadcast long before the fighters step into the Octagon.

Anik prides himself on doing everything possible to get truly ready for the task at hand when he's going to have a microphone in front of his face while calling the action for the greatest fighters in the world.

That said, as much as Anik enjoys doing his job, he still has a hard time calling it work because he just loves it so much.

"I think for a lot of us, that's what we were hoping our professional lives would play out. That we would get to go out and work a job that doesn't really feel like work," Anik said. "Certainly there are times when I'm doing back-to-backs and I'm trying to master 52 fighters in a 10-day span where your patience is tested at times, but then I think, ‘I'm watching MMA right now and I’m getting paid to do this.’

"You should see me watching Volkan Oezdemir and Anthony Smith this weekend. I'll be jumping out of bed trying not to wake up my wife. There's no faking the passion, and once you're exposed to mixed martial arts, you get the bug something fierce. I certainly got the bug and have essentially devoted the last 11 years of my life to the sport."

Anik will return to the broadcast booth on Nov. 3, when he calls UFC 230, featuring heavyweight champion Daniel Cormier putting his belt on the line against "The Black Beast," Derrick Lewis.

Just gotta say I've read every last message if you sent one today and I really appreciate it!
— Jon Anik (@Jon_Anik) October 22, 2018