Angela Magana Takes on the World 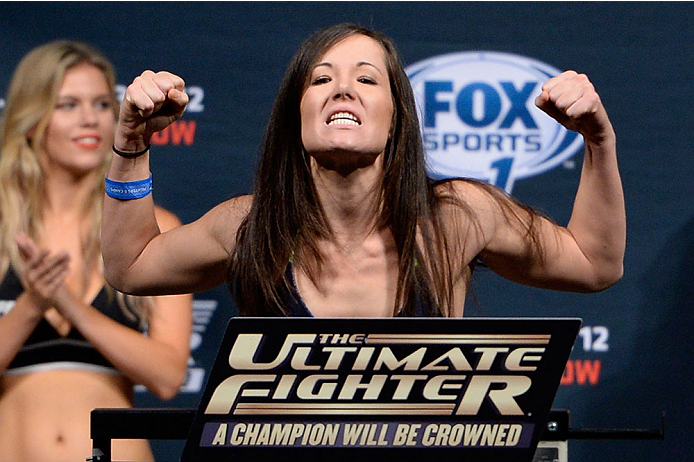 By now, you’ve probably heard of Ms. Angela Magana, or as she likes to be referred to as, “Your Majesty.” For good or bad, for her fighting on The Ultimate Fighter 20 or her antics on social media, the point is that you’ve heard of her.

“When I was on the TV show, some of the girls were giving me pointers on Twitter,” she said. “I didn’t even have an Instagram until I left, I think my last post on Twitter was six months before I started the show, and I didn’t really start until a few episodes in, when I started getting all this Twitter abuse. So I started having fun with it.”

She’s not kidding, and whether it’s jousting with fans she calls peasants, posting provocative pictures taken years ago, or taking up the cause of Hollywood’s Amanda Bynes, Magana’s Twitter presence may not appeal to everyone, but it does have people talking, and it’s an interesting response to those who find it necessary to poke at athletes in the public eye. Some don’t handle it as well.

“I think it comes from the fact of seeing a lot of the other girls get upset and bent out of shape,” Magana said when asked how she found this route. “(UFC women’s bantamweight champion) Ronda Rousey gave me a pep talk about this in China before the show even started. She knew my attitude and how I am, and I just took it and ran with it. And the reason I’ve dealt with it so well is because I enjoy the banter. I think it’s fun. With the guys at the gym, we give each other s**t all day long. Me and my closest friends, all we do is talk s**t on each other all day and have fun with it. It’s an extension of that.”

Sadly, the focus on Magana’s social media presence has taken away from a fascinating real life story that has seen her survive several harrowing events, whether it was the car accident that put her in a coma, the fall that shattered her spine, or just finding a way to survive as the daughter of a mother who was a heroin addict. The 31-year-old California native knows it too, but she’s also aware that these days, some just won’t read past 140 characters, so she’s adapting to the environment, good or bad.

“It really is working,” Magana said, estimating that her Twitter following grew by 10,000 within just a couple weeks after she started. But does this all take away from the reason she’s here in the first place, to fight?

“It doesn’t affect training at all,” she said. “I put my phone in my bag and I train. That stuff keeps me from getting nervous and overthinking the fight. It helps keep me distracted. Whenever I’m getting ready for a fight and I’m in the back in the locker room, I like laughing and joking, and then I get focused when I warm up and I’m about to walk out. So it’s a vehicle of entertainment. Instead of watching television, I Twitter bash people.”

She laughs, loose and ready to put the gloves on for the first time in the UFC tonight against castmate Tecia Torres.

It’s her first official bout since September of 2013, but she was able to shake off some of the rust in a live setting on the show, losing to Aisling Daly in a bout that saw her battle the Ireland native on even terms for two rounds before getting stopped in the third.

“I had a couple days’ notice, and at that moment I was completely overtrained, and I knew I was going to have to finish my fight,” Magana said of the bout. “It’s such a weird environment. It felt like a real fight, but everything around it wasn’t real. It was surreal though. The whole thing was odd, but I like odd things, so I enjoyed every step.”

She would also have no hesitation doing it again.

“In a heartbeat I would do it again,” Magana said. “I’m just grateful for all the learning experiences. I learned a lot about human nature, I got to know some of the most amazing girls that I’ll be friends with for the rest of my life, and if nothing else, that’s one thing to be grateful for.”

But what about the haters?