“I think my last three fights were probably the best three fights that I’ve had since being back in the UFC."
By E. Spencer Kyte, on Twitter @SpencerKyte • Jan. 20, 2020

“If you love what you do, you’ll never work a day in your life” is an old adage meant to encourage people to find something they’re passionate about and make that their career. It’s a lovely sentiment, but it’s also complete nonsense, as anyone who loves what they do can tell you.

For instance, UFC strawweight fixture Angela Hill absolutely loves fighting, but it wasn’t until stepping into the Octagon felt more like a job that she really started finding her rhythm and turning in the best performances of her career.

“I think my last three fights were probably the best three fights that I’ve had since being back in the UFC,” said Hill, who takes on North Carolina native Hannah Cifers on the main card of this weekend’s event at PNC Arena in Raleigh. “I’ve been able to diversify a lot better and get a little looser in there.

“I feel like I’ve been able to grasp a lot of the mental game and allow myself to be the fighter that I am in the gym, on pad work, in wrestling class; just letting myself be more comfortable in there and not get too caught up on what happens if this happens and just being in the moment.”

The key for Hill — and the piece that makes competing in the cage feel a little more like “going to work” — is staying active.

After returning to the UFC in 2017 and logging three appearances, the former Ultimate Fighter competitor only made the walk to the Octagon twice the following year, and the six-month gap between her win over Maryna Moroz and split decision loss to Cortney Casey gave her way too much time to think about the fight.

She had a seven-month stay on the sidelines between that loss to Casey and her first-round submission defeat at the hands of Randa Markos in March, the first time she’d dropped back-to-back fights in her career. Eager to get the sour taste out of her mouth, Hill quickly volunteered to replace her friend and training partner Jessica Penne opposite Jodie Esquibel in April, where she claimed a unanimous decision win.

When Felice Herrig fell out of a fight with Yan Xiaonan at the start of June, Hill volunteered for that one too, landing on the wrong side of the cards in a fight that was closer than the unanimous decision verdict illustrates. A little over three months later, she ventured to Mexico City and turned in the best performance of her UFC career to date, collecting a third-round stoppage win over newcomer Ariane Carnelossi.

“I really like staying active because there isn’t this looming pressure that overtakes everything in my life,” said Hill, who fights for the fifth time in 11 months this weekend. “It feels more like a job as opposed to this big event that is going to make or break me. It’s not that serious and it took me a while to realize that.

Another thing that has contributed to Hill’s steady improvement and more consistency inside the cage is renewed confidence in her skills.

The 33-year-old from Maryland landed a spot on Season 20 of The Ultimate Fighter with just a single mixed martial arts appearance under her belt, a second-round stoppage win over future Invicta FC competitor Stephanie Skinner. Despite being in the early days of her transition from kickboxing, her charisma and potential got her into the field of 16 vying to become the inaugural UFC strawweight champion, putting her in the house alongside established veterans like Herrig, Penne, and Carla Esparza, as well as promising up-and-comers Tecia Torres, Joanne Calderwood, and Rose Namajunas.

“I was like, ‘F*** it — I’m the bomb! I’m going to be the first UFC strawweight champion even though I’ve only got one fight!’” recalled Hill with a laugh, reflecting on the ultra-confident mindset she carried into the TUF tryouts. 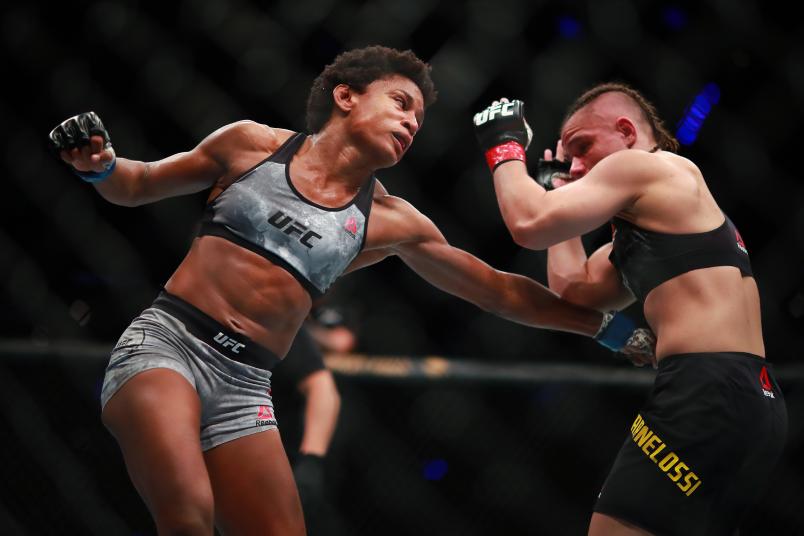 She was bounced in the opening round of the tournament by Esparza, the top seed and eventual winner, but got a chance to compete on the finale card, where she registered a unanimous decision win over Emily Kagan. But losses to Torres and Namajunas followed, and before she’d even had a chance to get her footing inside the Octagon, Hill was released.

Quickly signed by Invicta FC, the Alliance MMA representative earned back-to-back stoppage wins three months apart to secure a title opportunity, then edged out Livinha Souza two months later to claim the strawweight title. She successfully defended the belt six months later, capping a 4-0 year, before getting called back to the Octagon in early 2017.

A steady diet of tough matchups has led to inconsistent results, but after an active year in 2019, Hill is finally back to believing in herself the way she did heading into the TUF house back when she began her mixed martial arts journey in earnest.

“One thing that’s great for me about the route I took is that I’m super-tough, I have a thick skin, and I can handle a loss; it doesn’t break my confidence in myself,” said Hill, who has shared the cage with a pair of former champions, a several Top 15 fixtures during her 12-fight run inside the Octagon. “I’m not necessarily less confident now, I’m just more realistic and I understand the consequences going in there, but that’s the whole mental thing of getting back to remembering why I wanted to do this.

“I had to force myself to get back to this mindset and now I’m starting to see myself the way my coaches see me, the way my husband sees me, the way my fans see me,” she added. “That was my mentality and I think after the Randa fight, I realized, ‘Hey, you doubted yourself way too much in there’ and I had to get back to being that girl from five years ago who made her debut and was ready to beat a bunch of b****** up and I think I’m finally there.”

The next test of that comes on Saturday night, when she ends her longer-than-normal (for her) four-month layoff by stepping in for Brianna Van Buren opposite Cifers, a rugged 27-year-old from Wake Forest, North Carolina.

After dropping her promotional debut to talented prospect Maycee Barber towards the end of 2018, Cifers picked up back-to-back decision wins in 2019, pushing her record to 10-3 overall.

“She looks like she hits hard, but she kind of wings her punches,” said Hill, offering her thoughts on what Cifers brings to the table this weekend and how the fight will play out. “I feel like I have the speed advantage. She’s fought some tough fights, so I don’t think she’s going to quit right away, but I definitely think I can get her there.

“I’m going to put the pressure on her, put the volume on her, use my speed to my advantage and hit her before she hits me.”

And win or lose, Hill will be back in the gym almost immediately, ready to raise her hand the next time a fighter falls out and the UFC needs a replacement, because the only way she can continue getting better at punching people in the face is by continuing to punch the clock.