Angela Hill Found That The Secret To Her Success Is Activity, And She's Excited To Get Back To Competing At UFC Fight Night: Rozenstruik Vs Gane
By Zac Pacleb, on Twitter @ZacPacleb • Feb. 25, 2021

A little more than a year ago, Angela Hill earned a decision win over Loma Lookboonmee in Auckland, a result more significant than just representing Hill’s third straight victory. The bout was also Hill’s sixth in 12 months, putting her alongside Donald Cerrone and Sam Alvey as having the most active year-long span in UFC history. Hill went 4-2 in that span, earning plenty of respect along the way.

She followed that run with a pair of high-profile matchups against Claudia Gadelha and Michelle Waterson. Both ended with her losing split decisions (although she still insists she definitely beat Gadelha), but Hill definitely felt her stock rise in 2020.

“I feel like that year was my coming out party,” Hill told UFC.com. “Even though my last two fights didn’t go the way I wanted, I still feel like I was successful in those fights. I’ve never had a group of fights go that way for me where I’m just like, ‘Man, I’m just really showing everyone how good I am, and everyone is on my side, and people want to see me succeed,’ so it was a really good year for me. I just want to keep that momentum going, so the sooner I can get back in there, the sooner I can get a couple more wins under my belt, and I think I’ll be looking pretty good.”

Hill originally looked to bounce back against Tecia Torres in December, but when a positive COVID test forced Hill out of that bout, she was itching to get back into action as soon as possible.

She feared she wouldn’t fight until the summer, but a last-second chance to fight Ashley Yoder came up, and Hill, naturally, said yes. The two fought nearly four years ago – a unanimous decision win for Hill – and have become amicable acquaintances since, even considering training together on occasion in southern California. But Hill won’t be holding back when they square off on February 27, and she’s single-minded on the goals set for fight night.

“You don’t want to go 1-1 (against someone),” Hill said. “You want to make a statement. She’s coming after my number, so I definitely want to put in work and finish her if possible, and I feel like I can, so I think this is going to be a great fight to really work on those moves that I’ve been working on since my Michelle fight and just put some respect on my name. Get some of that confidence going and really just show people how good I am now.”

Hill was particularly inspired by Max Holloway’s performance in January against Calvin Kattar, lauding the Hawaiian’s ability to land a high volume of strikes over the course of the fight and put any doubts to rest. Coming off a pair of decision losses, Hill is hoping a similar uptick in volume, as well as a diversification in her attack, helps her pull away on the judges’ scorecards if they are necessary.

“If I won those fights (against Gadelha and Waterson), I’d be like, ‘Ah, I’m good.’ I’d be chillin’,” she said. “I’d do the same thing the next fight, but those two fights just made me realize I need to start adding more weapons to my game. I get too comfortable in a striking match just because I’m not getting hurt, and I’m hurting them, so I’m like, ‘Oh, obviously I’m winning,’ but when you look at the punch counts, they’re too close. They could be a lot bigger apart. It just made me focus more on maybe getting a takedown. Maybe finishing them or at least threatening it so I can land more punches. 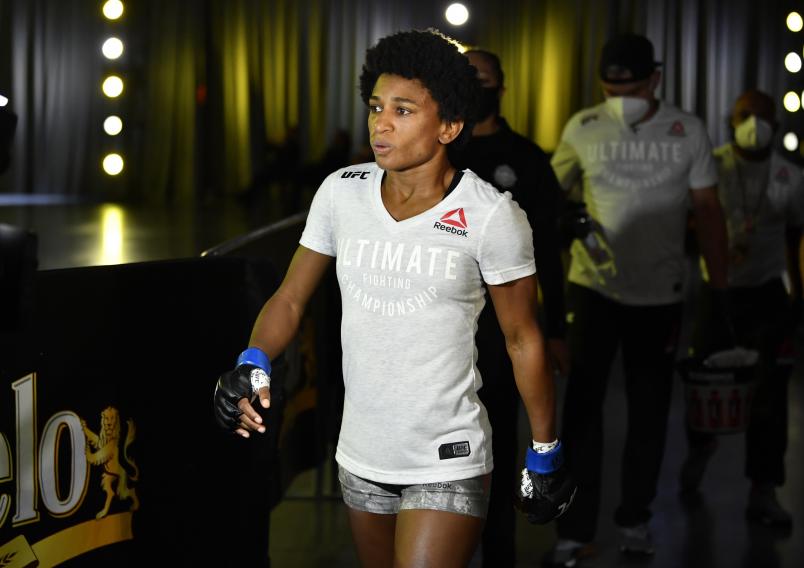 “I feel like it’s so easy to say, ‘Oh, finish your fights,’ but one thing I can control – because finishing is so hard to do sometimes, especially as a striker at my size – is volume,” she continued. “I think that’s what I took from that. Just keep pushing. Every time I fight, I push a little more, and I know I’m right there, so I just need to push a little bit harder, and I’m going to start getting that streak growing.”

Hill is hopeful this performance puts her back on track toward a title shot, claiming most fighters in the Top 10 are really one or two fights away from challenging for gold. It’s what makes those last two losses harder to swallow for Hill. A pair of wins over Top 10 stalwarts like that probably puts “Overkill” into that conversation to challenge Zhang Weili sooner rather than later, but knowing Hill, it won’t be too long before she racks up a few fights in a short span.

Before that, though, she has Yoder to face. It’ll be Hill’s first fight in five months, the longest stretch between fights for her since she waited seven months between fighting Cortney Casey and Randa Markos. That Markos bout started the aforementioned hyperactivity for Hill, so maybe this is the start of another activity streak for Hill, one that gets her that much closer to her championship aspirations.

“I definitely feel better when I’m active,” Hill said. “I feel like I learn more in the fight, and then I actually go and work on the things that I did wrong afterwards, so it’s a lot easier for me to gauge where I am and gauge where my holes are. I just feel like I’m a more complete fighter when I’m getting in there as often as possible.”