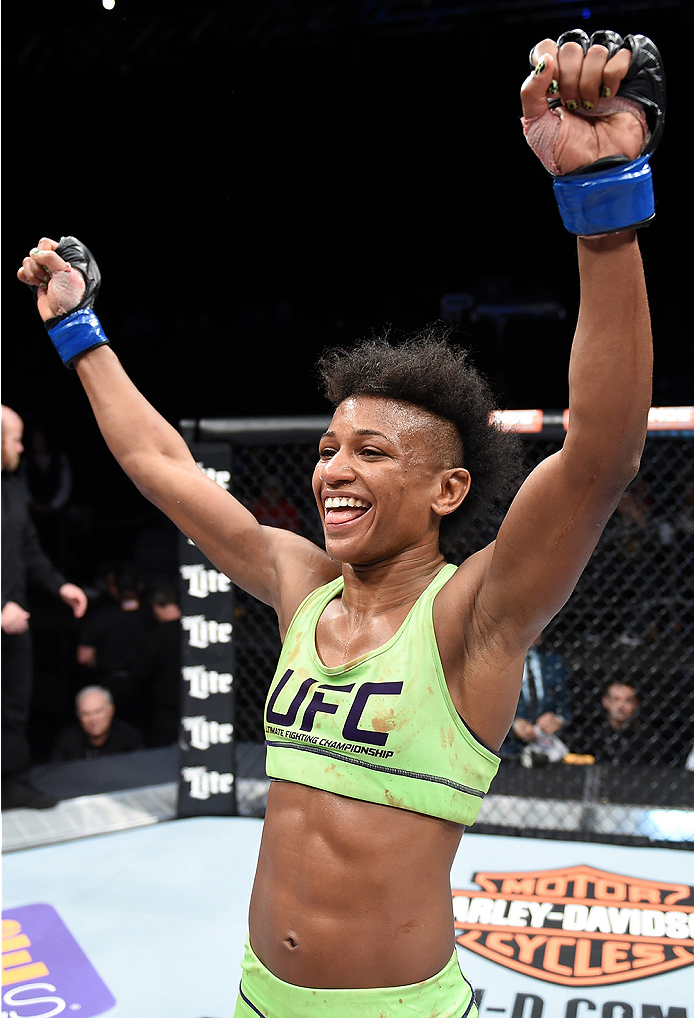 Angela Hill is ready to show what she’s all about.

While the scrappy Maryland native was introduced to the UFC fan base during her time on The Ultimate Fighter 20, the slick striker believes there was very little about who she actually is as a person and a fighter that translated from the reality show. Where some of her fellow strawweights - who were already veterans in the fight game - were quick to look for camera time in order to further their personal brands, that’s simply not Hill’s style, as she chose to sit back and take it all in.

In doing so, Hill was able to gauge the rest of the talent in the women’s strawweight ranks, and those training sessions assured her she could hang with best female 115-pound fighters in the world.

“Being able to train and see what the other girls in my division have was probably the best part about being on the show,” Hill explained. “I have a very strong work ethic and - probably even beyond natural talent - that is the thing that has gotten me so far so quickly. I’m always trying to beat the person next to me in the gym and I train hard to perfect the things I suck at. I got to see the other girls’ work ethic and I didn’t really see anyone who could match mine. While there were probably who could hit me more or tap me out, my time on the show let me see how lazy some of them were. It definitely let me know I could catch up to them in a short amount of time.

“I was pretty surprised where my skill level was, to be honest. I thought I was going to get smashed every day in training. But I felt my skill level was pretty comparable to all the other fighters that were there. It was pretty eye opening and kind of legitimized me. While I only had one fight going into the show, I found out I was comparable to the top fighters on the show. That gave me a lot of confidence that I would be able to beat and surpass these girls.”

Beyond the cameras, the 27-year-old former animator is an outgoing and lively soul whose vibrant personality is represented by her ever-present smile. Even when Hill is sitting still, there is the lingering sense that her energy is only waiting for an opportunity to burst into motion, and when that process is at its best is when she’s showcasing her talents inside the Octagon. There is something about fighting that brings certain elements inside of her alive, and it’s a feeling she continues to pursue at a furious pace.

And that pace is something unique where Hill is concerned.

She admittedly got a late jump on her combat sports career, but she’s absolutely made the most of every step she’s taken along the way. From wrecking shop as a Muay Thai fighter to becoming part of the inaugural class of 115-pound women to enter the UFC fold, Hill isn’t looking to waste any time climbing the divisional ladder.

Proof of this plan is obvious in her upcoming bout at UFC 188. The rangy striker will face one of the fiercest fighters on the strawweight roster in American Top Team representative Tecia Torres. “The Tiny Tornado” was widely regarded as the favorite to win the TUF 20 tournament, and even though her drive to do so was actually stunted twice during the show, she bounced back in her first official UFC fight by drubbing Angela Magana for three rounds in the finale.

With the amount of hype and expectation surrounding her still strong, Torres could very well find herself in a title fight with a victory in Mexico City. That said, Hill is confident she is going to put those plans on ice on Saturday night. She knows what Torres is going to bring when the Octagon door closes behind them, and believes the strides she’s made since her debut back in December is going to be the key to victory over the undefeated veteran.

“I’m so excited for this fight because I’m going to show everyone that I’m someone who is exciting to watch and because of that you’re going to want me in there all the time. Tecia has already said she’s afraid of my striking, which is something she should be afraid of. I expect her to be looking to use her wrestling and jiu-jitsu, but I don’t think her grappling is better than mine. I definitely don’t think her striking is better than mine. I don’t think she has a lot to offer me and I am going to show that on June 13.”

Hill’s personal goals rest in her ability to defeat Torres in Mexico City, but the artist/fighter is also conscious of the overall state of affairs in women’s MMA in general. While Ronda Rousey has sparked a storm of interest in the action that takes place at the 135-pound limit, Hill and her fellow strawweights are still working to establish themselves on the premier stage in the sport.

Filming the reality show served as a great introductory tool, but so much of their ability to lock down the attention of fight fans will depend on their performances inside the Octagon. Hill knows the talent is there to make it happen, but also realizes the drama that circulated during taping and seemingly launched a thousand Twitter beefs is both a gift and curse.

Female fighters going back-and-forth over social media will draw eyes, but it pales in comparison to the connection that can be made with an action-packed scrap. She knows she’s going to bring the ruckus each and every time she’s slated to fight, and is more than willing to do her part in solidifying the legitimacy of her weight class.

“There is always going to be drama in this division but that is also because we have some strong personalities in our weight class,” Hill said. “For me that’s really silly because the show feels like a dream sequence that happened but it’s still in this fantasy realm. All the circumstances of the show were so unrealistic in real life that I feel like you can’t take any of that seriously. There’s no other place where you’d have to go home and sleep in the same room with the person you are fighting the next day.

“A lot of those girls decided at the end of the show they don’t like this person or that person and they just held on to that s**t, where myself and other girls were able to let it all go. I think we are still fighting for respect and our place in the UFC because I don’t think people are taking us as seriously as they should. We are just trying to be seen, and the more people are talking about us the better.”