Angela Hill Arrives At Her Crossroads

Strawweight Has Things She Wants To Prove Starting Saturday With Torres Rematch
By E. Spencer Kyte, on Twitter @SpencerKyte • Aug. 5, 2021

Angela Hill has been chasing this rematch with Tecia Torres for quite some time.

After first meeting more than six years ago in Mexico City at UFC 188 and seeing a fight at UFC 256 come apart after Hill tested positive for COVID-19, the ranked strawweights will finally run it back this weekend on the main card of UFC 265 at Houston’s Toyota Center, and the 36-year-old from PG County cannot wait to share the Octagon with her fellow TUF 20 cast member again on Saturday night.

Order UFC 254: Lewis vs Gane For Any Device

“I was a little butt-hurt when I fought her,” began Hill, chasing her admission with a laugh just a few days before getting the chance to settle the score with Torres. “I felt like she got one over on me. I felt tricked.

“When we shook hands at the weigh-ins, she said, ‘Let’s make some money tomorrow night!’ and I was like, ‘Oh s*** — it’s going down!’ A lot of people were excited about it because it was two great strikers going at it and then she takes me down and holds me down, and I was so mad and so bad on the ground that I couldn’t do anything about it.”

"I think I'm a little extra pumped."@AngieOverkill can't wait for her rematch with Tecia Torres 🔊⬆️

Hill was still early in her career at the time, having joining the groundbreaking all-female cast of The Ultimate Fighter with just a single MMA appearance to her name, entering as the 16th seed and getting bounced from the tournament to crown the first UFC strawweight titleholder by the eventual champion, Carla Esparza, in a little under four minutes.

She won her UFC debut on the series finale, outhustling Emily Kagan to collect a unanimous decision win, but getting tossed in with Torres in her second Octagon appearance was just too much, too soon for the former Muay Thai standout that was still finding her way in a new sport.

Following her decision loss to Torres in Mexico City, Hill was submitted by future champ and TUF 20 finalist Rose Namajunas four months later at UFC 192 in Houston and was released, quickly signing on with Invicta FC, where she started to show her developing skills. Consecutive Performance of the Night bonuses for stoppage wins over Alida Gray and Stephanie Eggink established the Alliance MMA representative as a top contender, and in May 2016, Hill claimed the strawweight title with a hard-fought, split decision win over Livinha Souza. She successfully defended the title against Kaline Medeiros six months later to extend her winning streak to four and earn a call back to the UFC, where she’s been a fixture ever since.

“Now that I know so much more, this is going to be that fight that people we’re looking forward to in Mexico City and it’s going to be exciting,” added Hill, who got back in the win column with a unanimous decision victory over Ashley Yoder earlier this year after a pair of frustrating split decision losses to Claudia Gadelha and Michelle Waterson last year. 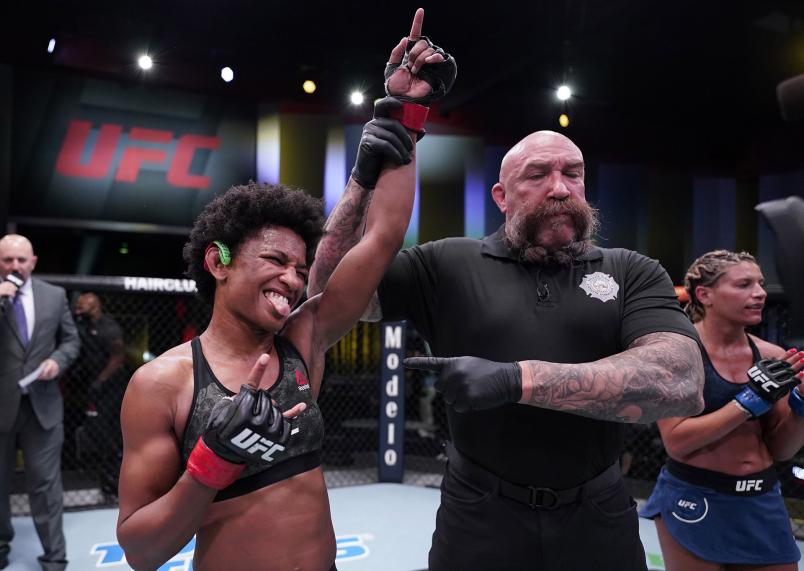 Angela Hill reacts after her victory over Ashley Yoder in a strawweight fight during the UFC Fight Night event at UFC APEX on March 13, 2021 in Las Vegas, Nevada. (Photo by Jeff Bottari/Zuffa LLC)

“Her last performance was really good — she fought someone that wasn’t near her level and she smoked her,” she said of Torres’ win over Sam Hughes in December, where the “Tiny Tornado” battered the newcomer with a variety of strikes, securing a stoppage victory between the first and second rounds as Hughes was unable to continue. “People see what Tecia can do when she’s confident, and I think this is going to be a helluva fight as long as I’m able to play my game and she doesn’t look to make it boring.”

Hill’s second stint on the UFC roster can be broken down into two halves — the eight fights between February 2017 and June 2019 where she amassed a 3-5 record, but turned in efforts that exceeded what that record otherwise suggests, and the six fights since then, during which time the veteran has gone 4-2 with a pair of narrow, debated losses while establishing herself as a Top 15 talent in the 115-pound ranks.

The catalyst for that shift was a decision by Hill to keep as busy as possible following her stoppage win over Ariane Carnelossi in the fall of 2019, with the fan favorite acknowledging that too much downtime allowed her to get in her own head and over-think things.

She started last year doing her best “Cowboy” Cerrone impression, jumping into short-notice opportunities against Hannah Cifers and Loma Lookboonmee a month apart, winning each fight to earn a date with former title challenger Claudia Gadelha, which resulted in the first of two consecutive split decision losses that didn’t sit all too well with Hill or the fight-scoring public, but solidified her standing as one of the top strawweights in the world.

Rather than dwell on the final scores, the veteran has opted instead to focus on the positives that came from those bouts and the feelings she had before the final verdicts were announced, knowing that regardless of the official results, each of those fights showcased how far she’s come over these last six years.

“The one inspirational meme that I’ll get behind — because I think they’re all corny — is ‘one-percent better every day’ because when I’m busy, I can focus on that,” joked Hill, who has added studio work for the UFC, a podcast series with Karyn Bryant, and her color commentary debut on last weekend’s Cage Warriors event in San Diego to her resume in addition to being an active, ranked competitor in one of the deepest, most competitive divisions in the sport.

“There are a lot of things I’ve been working on since my last fight and my last fight week, and I think it’s been keeping me happy, keeping me healthy mentally, and I like to be busy. I’ve always been a hustler, so this is where I thrive.” 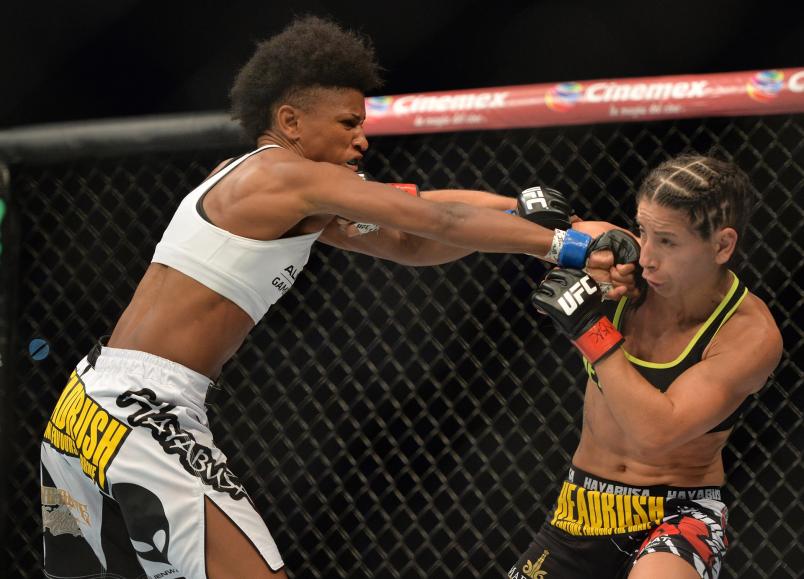 Earlier this year, the veteran got back into the win column with a unanimous decision victory over Ashley Yoder, who has inherited Hill’s old role as the talented, durable fixture in the division with a record that doesn’t quite reflect her true abilities, striding to the center of the cage to await the scores being read without a hint of concern that things might not go her way.

Given the way her 2020 campaign ended, it was a satisfying feeling, although there is something more enjoyable that Hill craves even more.

“The only thing more satisfying is dropping them and having the ref stop the fight, and I’ve gotten that; I’ve tasted that with Hannah Cifers and with Ariane Carnelossi and it feels amazing.

“I’m chasing those highs and I know I can do it,” the talented strawweight continued. “I think I’m a totally different fighter this year than I was last year.”

More than anything else, that is why she’s been so dogged in her pursuit of this matchup with Torres.

While avenging her previous loss and ideally delivering the type of fight she expected the first time around in Mexico City are certainly motivators for Hill heading into this weekend’s main card matchup, she’s also acutely aware of the fact that this is an opportunity to showcase all the improvements she’s made since their initial encounter and put herself in the thick of the title chase in the 115-pound weight class.

“When (Zhang) Weili fought Tecia, she was able to prove that she deserved a title shot by beating her, and then she got it (a championship opportunity) and she won (the belt), so that’s my goal is to put it in their heads like, ‘Angela deserves to be in the Top 10, Top 5 and deserves that title shot.’