Andy Ogle - He Likes to Make an Entrance

"There’s nothing Akira can throw at me which hasn’t been thrown at me before at least twice. So I’m just gonna have fun. I’m a natural born entertainer." - Andy Ogle 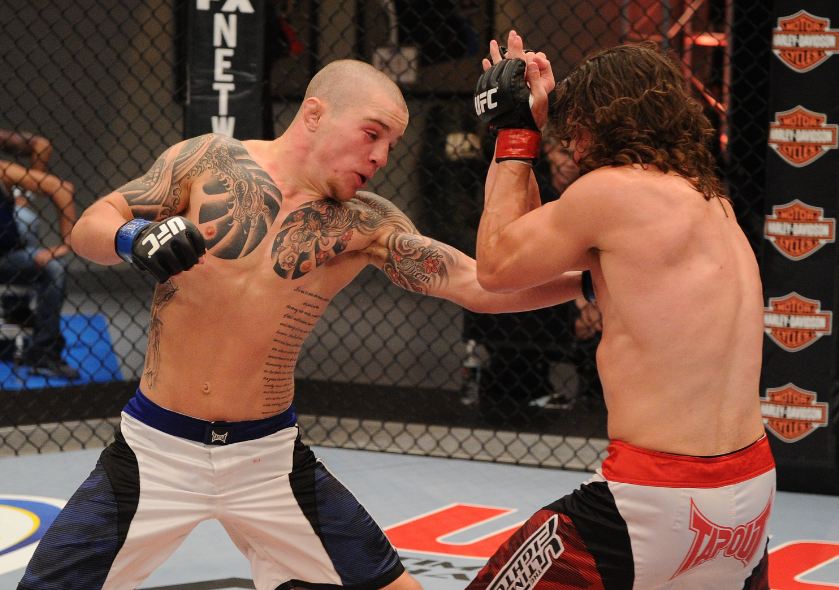 At the time it happened, Andy Ogle was crushed, knowing that he wouldn’t be competing with his teammates on the season finale card of The Ultimate Fighter 15 on June 1st in Las Vegas. Three and a half months later, Ogle has taken a more optimistic slant on things.

“Let’s just say good things come to those who wait,” said Ogle, who will finally make his Octagon debut this Saturday against Akira Corassani. The way he sees it, the medical suspension he received from the Nevada State Athletic Commission after his TUF15 quarterfinal loss to Al Iaquinta was sort of a blessing in disguise.

“It’s been a long time, but I feel as if it’s worked out in my favor because I’ve had a long time to prepare for this fight and it’s at a better weight class for myself,” he said, looking forward to his featherweight debut in Nottingham. “I was disheartened that I didn’t get to fight on the finale with all my teammates, but at the same time, I feel as if it’s worked out better for me.”

He may be right, as the self-described “natural born entertainer” will have the TUF15 spotlight all to himself while also getting to compete in his home country of England at the same time. Most importantly though, he believes that come fight night, he’ll be the best he’s ever been. And at 8-1 as a pro thus far, “The Little Axe” has been pretty good.

“I’ve had three and a half months to think about this one guy,” he said. “On the show (TUF15) I had one week to think about a guy. It’s a lower weight class now, so I’m faster and larger for the weight, I’m prepared for it, and I’ve thought about this fight every day when I wake up and every day when I go to sleep. I have grafted my ass off for this fight, and I’m gonna put everything in that cage and leave it all out there. Just don’t blink. There are going to be fireworks, I guarantee it. I don’t usually guarantee much, but I do guarantee the best version of me you’ll ever see and I hope to put on a great performance and show people what the UFC is all about.”

That confidence isn’t created in a fighter’s head; it’s created in the gym, where days, weeks, and months of preparation with like-minded training partners and coaches make a fighter believe that anything he sees on fight night isn’t anything like what he’s seen in the gym. And that’s undoubtedly the case in Liverpool, where Ogle has been working with Team Kaobon, home to fellow UFC fighters Terry Etim and Paul Sass.

“When I went back they just treated me as if I was just normal Andy,” said Ogle of life after TUF. “It really helped a lot because they’ve got people like Terry Etim and Paul Sass, and they just get treated like normal too. We’re all fighters, we’re all trying to make it in the UFC, and just because I’m having my debut there doesn’t make me any different, and that’s the main thing, just getting my ass handed to me like normal and like everybody else. No special treatment. (Laughs) If I say I don’t want to do something, they say ‘Andy, shut the hell up, you’re doing it.’ I’m nobody, I’m just a cog in the machine.”

Luckily, one of the other cogs, lightweight up and comer Sass, is fighting on the same UFC on FUEL TV card this weekend. And you know what they say about misery loving company.

“I look over my shoulder and sometimes after training I’ll say ‘Paul, this has been a long fight camp,’” said Ogle. “And he just goes ‘I know. I know it has.’ (Laughs) It’s not just me saying it, thank goodness. Or he’ll have an awesome day and I’ll have a down day, and the next time I’ll have an awesome day and he’ll have a down day, and we’ll just have a little laugh about it. Paul’s a very light-hearted kind of character, he takes everything in stride and he’s a very good teammate to be around when you’re going through a very tough fight camp. Paul can laugh anything off.”

The 23-year-old Ogle, a native of Newcastle, shares a similar light-hearted attitude outside the Octagon, with his sharp wit shooting him right up the charts of the best interviewees in the UFC – and he hasn’t even fought yet. Just ask him about the difficulties of being the only British fighter on TUF15.

“At the start of the show, nobody understood what I was saying,” he recalls. “I was really trying to speak slowly and I was trying to be eloquent, and it just was not working. And then I figured out if I put ‘dude’ at the end of every sentence, they figured out quite quickly what I was saying. I was saying ‘hey, how’s it going?’ ‘What did you say? I don’t understand what you’re saying.’ So I went ‘hey, how’s it going, dude?’ ‘Oh, well now that you asked, I’m awesome.’ (Laughs) And then it started coming out like Tourette’s: ‘how’s it going, dude? Do you want to roll, dude? I’m going to the toilet, dude.’”

Ogle became a popular member of the reality show cast, even among his castmates, but that wasn’t exactly the plan going in.

“At the start, I initially set my goals to be a one man wrecking machine and basically go through the whole tournament and not talk to anybody and be by myself, but I’m naturally a bit of an extrovert, and I like to be friendly, and before I knew it, I was friends with people, and it was tough, because what’s worse than being in the competition with everyone is being in the competition with 16 guys and actually liking the guys and being upset when somebody loses. But at the same time, you’re saying ‘I shouldn’t be upset; I’m not out of the competition yet.’”

After going 8-1 on the UK circuit and getting to Las Vegas, Ogle decisoned Brendan Weafer to earn a spot in the TUF house, and then upset Mike Rio via submission to make it to the quarterfinals. The knockout loss to Iaquinta ended his quest for the TUF15 crown, but didn’t deter him on his goal of greater glory in the UFC. That journey begins this Saturday, and he’s taking it on with no pressure whatsoever.

“People are always saying there’s pressure, and asking how you feel about this fight, and I’m thinking to myself, ‘there’s pressure to get to the UFC,’” he explains. “People say records are for DJs; they’re the guys that have s**t records. Your record gets you to the UFC and being an entertaining fighter and putting on the performances that you know you can do and having a great fight and being technically above the rest and being able to hang with the top dogs, that’s all alright, but mixed martial arts is a crazy sport and one little loss from something silly can be a huge setback. I’m in a position where I’m getting to have my actual UFC debut and not many people get to do that, especially in their home country in front of a home crowd with all the momentum I’ve built up so far, and I feel as if this fight camp’s been very tough and very long, and everyone’s been throwing everything at me. There’s nothing Akira can throw at me which hasn’t been thrown at me before at least twice. So I’m just gonna have fun. I’m a natural born entertainer. I’m just a little bit gutted that I’m not on the main card so I get to show more people on the TV, but my time will come and I’ll be on the main card one day.”

It’s hard to doubt him, considering his drive, determination, and love for the sport, something he picked up the second he discovered it and something he wants to show the world come Saturday night.

“I know what I want in life, and the moment I put on some gloves and started doing this sport, I said ‘I just need mixed martial arts in my life.’ It makes me feel alive and it made me a better person because I push myself every day, and I just love it.”