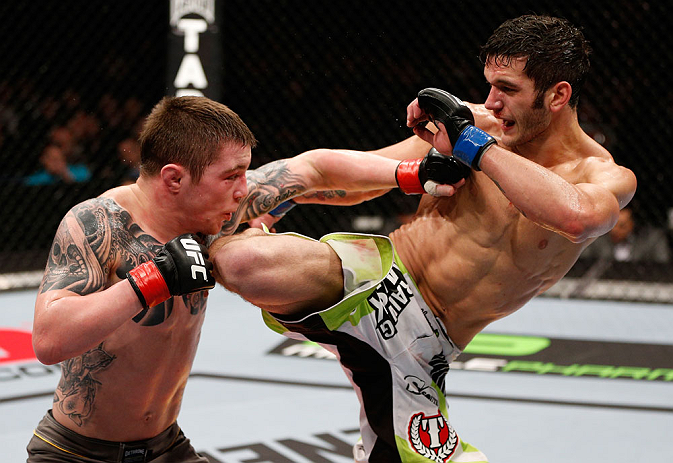 You hear a lot of things about the UFC from the fighters competing in the Octagon, but few put it as accurately and succinctly as England’s Andy Ogle when he says “The UFC can be a daunting place.”

And it has been so far for the 25-year-old from Newcastle. Since coming into the organization after a stint on season 15 of The Ultimate Fighter, Ogle has gone 1-3, a slate he considers 2-2 thanks to a controversial decision loss to Akira Corassani in his 2012 debut. But since that fight and an impressive defeat of Josh Grispi, “The Little Axe” has dropped back-to-back bouts to Cole Miller and Charles Oliveira.

That’s not where anyone wants to be heading into a fight, but as Ogle approaches his Saturday matchup with Maximo Blanco in Berlin, he prefers to look at the proverbial glass as half-full.

“With the Miller fight and the Charles fight, I feel like I was thrown in against the odds, so whatever I did, people weren’t expecting me to do anything, so the pressure was off,” he said. “I think I came away with more fans from the Charles fight and definitely from the Cole fight. At the end of the day, instead of seeing the negatives about it, I’m trying to see the positive.”

There were positives too. In against vastly more experienced foes, Ogle showed the heart and determination that have made him a fan favorite, along with an improved fight game that has been honed on the world stage. You could say that between TUF 15 and his four UFC bouts, the featherweight prospect has received an education few could imagine receiving anywhere else.

“You could say that,” he said. “I was a boy, now I’m a man in the sport. People forget how long it takes to grow in this sport and develop. There’s a lot in the game in so many different areas and you’ve got to develop them all and become an animal in all areas. It’s mixed martial arts and it takes a lot of time to develop. You see people coming into their prime at 27, 28, so I’ve still got a long way to go.”

Ogle cites other TUF alums like Alex Caceres, Ramsey Nijem, Rashad Evans, and Michael Bisping as examples of fighters who have had their ups and downs but still emerged with solid careers, and he expects to follow in their footsteps.

“It’s just the start,” he said. “They all had great careers off of TUF, and that’s going to be me as well. I’m going to be like the bad smell, I ain’t going away.”

He laughs, determined to beat Blanco on Saturday but not about to let the pressure of the situation deter him from that task. And while his two-fight losing streak may allow him to sneak up on his opponent and catch him napping, that’s something Ogle wants to continue doing as he moves through the featherweight division.

“I feel as if I’m a tough fighter and one of the ones to look out for and that’s up and coming in this weight class,” he said. “So it’s not just sneaking up on Blanco, I want to sneak up on the lot of them. After this fight, when I beat Maximo, if (UFC matchmaker) Sean (Shelby) wants to give me another tough as hell test and put me in the deep water again, I’ll thrive again and show everybody what I can do.

“The good times are just around the corner.”