"I’ve never done anything easy. I do things the hard way." - Andy Ogle 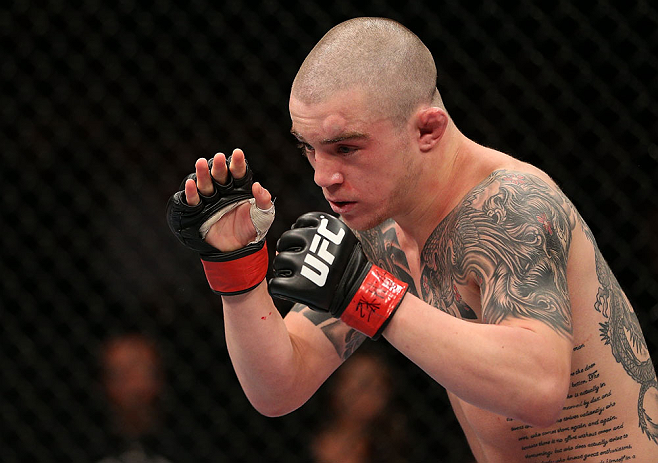 I admit it. I felt guilty interrupting Andy Ogle for the interview that’s about to follow. Not because the UFC featherweight was in the middle of a level of Call of Duty or catching up on some DVD box set. But when he told me he had just sat down to resume reading Victor Hugo’s Les Miserables, that was worth feeling guilty about, especially since it cut into the time he needed to keep up with his New Year’s resolution to read one book a week.

“The books are always gonna be there and there’s always going to be something to read,” said Ogle of his admirable pursuit. “It also keeps me thinking. It develops your thinking power, your creativity, makes you better at writing and reading and makes you more articulate. You’ve got more words at your disposal, and it takes you away from training and creates a different life. You can escape the four walls you’re sitting in.”

It wasn’t always this way for the Newcastle native, whose life used to be engulfed by MMA, MMA, and more MMA. But after injuring his hand in his UFC debut against Akira Corassani last September, he was on the shelf without being able to train. When his girlfriend asked him what he wanted for Christmas, Ogle didn’t surprise with his response of “stuff for training.”

This time, his lady retorted “That’s all you do.”

Later admitting that she was right, that fighting was “the only thing I know how to do, and it’s the only thing I want to do,” Ogle finally said “I’m gonna take up reading.”

Tearing into The Count of Monte Cristo, Ogle finished the book in a week. His girlfriend, an avid reader, said that maybe he should aim to read a book a month. Always the competitor, Ogle responded, “I’ll do a book a week, and that’s the challenge to myself.”

So far, he’s pulled it off. But Les Miserables is kind of a beast to knock out in a week. Ogle has it covered though, as his finish of The Lord of the Rings trilogy was followed by a weekend run through of Slaughterhouse Five which put him a week ahead of schedule and allowed him two weeks for his latest read.

Next up is the Brothers Karamazov, but first there’s the business of his day job, which takes him to London for a UFC on FUEL TV matchup with Josh Grispi this Saturday. For Ogle, it’s a chance to wipe out the memory of his controversial split decision loss to Corassani, one that he admits is still a sore spot with him.

“It still hurts now,” he said. “For a second, I actually thought they said my name wrong. That’s how convinced I was that I won. At the same time, I now totally believe that the UFC jitters are for real. It doesn’t get as scary as your first UFC bout. I put it on a pedestal, I made the task a man mountain – it was three and a half months of training for that fight, but I don’t feel as if I fought at my full potential. All I did was train and think about fighting. I had nowhere to go, nothing to take my mind off of it. And that’s no good.”

In the days following the defeat, only his second as a pro, Ogle was inconsolable, despite his friends and family’s best efforts.

“How do you think Akira feels?” asked one of his mates. “Do you think he feels happy?”

“Yeah, but nobody thinks he won. It must be like an empty win for him.”

Soon, Ogle got his mojo back, and with his hand healed and his new reading hobby taking off, the “Little Axe” was sharpened again.

In Grispi, he will have to do it the hard way, despite the New Englander’s current three fight losing streak. Once a highly-ranked featherweight getting ready for a shot at Jose Aldo’s title before Aldo was forced out of their UFC 125 bout due to injury, Grispi has fallen into a slump, but he is still a dangerous fighter. Ogle is well aware of the danger Grispi brings, but he believes this fight’s end result will come down to who is better prepared mentally for the bout.

“Psychological games play a helluva lot at the top level in the UFC,” he said. “I’ve seen guys lose games of golf through one hit, and it can basically ruin the whole tournament for them and psychologically destroy them. Look at tennis and Andy Murray in his last one against (Novak) Djokovic. He mentally broke. And Josh is on an 0-3 skid. If he loses one more, he’s probably gonna be out of the UFC, and I know that’s gonna be playing in his head. It’s gotta be. The UFC is where everybody wants to be. It’s the dream, it’s the crème de la crème, and he’s on an 0-3 skid and at the weigh-ins I’m gonna have to remind him of that. If he loves this sport as much as I love this sport, I know it will be the first thing on his mind when he wakes up and the last thing on his mind when he goes to sleep.”

But if Grispi feels as if his back is against the wall, shouldn’t that make him even more of a threat? Ogle isn’t so sure.

“I watched the (George) Roop fight and when things don’t go his way, he seems to crumble a little,” said Ogle. “It’s just an observation. The fact that he’s on this big skid and it’s gonna be on his mind, he’s either gonna be like a caged animal and come out guns blazing, or he’s gonna play it safe. I don’t know which one he’s gonna do. We’ll find out when the fight gets underway and I’ll just deal with what he throws at me. But I ain’t going anywhere – I’m coming straightforward.”

He’s also been thinking about the moment he believes should have been his last September.

“All the time. It’s constantly going through my head how amazing it’s going to be and how sweet it’s gonna taste. Josh is a great guy, a lovely guy, but sorry, it’s not gonna be your night. He’s young, he’ll get another chance, but not on February 16 he’s not.”

Then it’s back to the books for Andy Ogle, who already has plans on how to top his 52 books in 52 weeks stint.

“Maybe next year I’ll write a book,” he told his girlfriend, who asked him whether the book would be a fantasy book like Lord of the Rings, or a zombie book, both topics which are close to his heart.

“I’d rewrite Lord of the Rings, but with zombies.”