"I’m making progress in leaps and bounds right now at the MMA Lab. I have the heart and work ethic, and it was just about finding
the right gym and the right guys to be training with." - Andy Enz 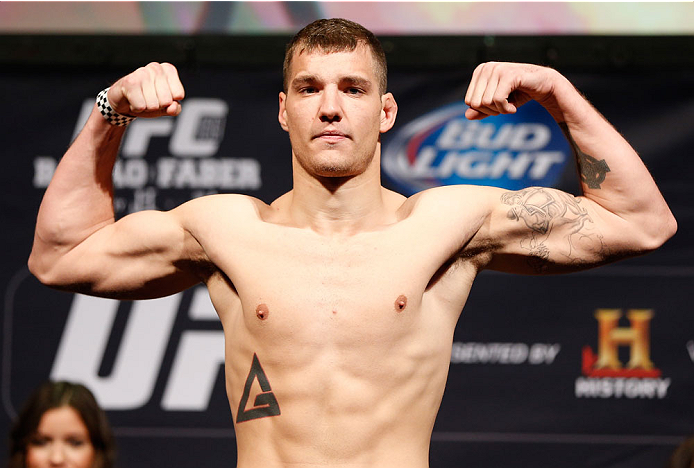 Putting everything together on fight night is a difficult formula to master. Those who are able to parlay the hard work and sacrifice of preparation into performance under the bright lights typically go on to find massive success in the realm of combat sports, while those who fail to work the process quickly fade into irrelevancy. Talent is ultimately the most crucial factor in the equation, but experience is important as well.

While Andy Enz is still in the early stages of his mixed martial arts career, he believes he’s been steadily putting the right type of experience under his tires along his journey.

After spending the first chapter of his career running roughshod over the competition on the Alaskan regional scene, Enz started to build some solid momentum. He had found success in all eight of his fights out of the professional gates, with all but two of those bouts ending by way of submission finish, and that impressive run resulted in a call to compete on the biggest stage in mixed martial arts.

There haven’t been many fighters to emerge from the Alaskan scene to find success under the UFC banner, but Enz believes there is a lot of potential sitting in “the land of the midnight sun.”

“Things are pretty sparse up there because there just aren’t a lot of pro athletes in Alaska,” Enz said. “People don’t understand how hard you have to train to be successful in this sport. I decided to go down to the lower 48 and see what training was like and it was an eye opener. These guys all train hard and it helps push me to improve my game. I needed to get out of Alaska to really develop the skills I needed to compete at the top level.

“Tank Mode” squared off with The Ultimate Fighter alum Clint Hester at UFC 169 back in February, in a bout that had the potential to kick off his time under the UFC banner in exciting fashion. Unfortunately for Enz, he wasn’t able to get things rolling at top speed and came out on the losing end of a unanimous decision on the judges’ scorecards. Yet, despite the loss, the Alaska native was able to take positives from his first showing inside the Octagon.

“Clint is a veteran of the UFC now and it was great to get some rounds in with a top competitor. I was able to keep pushing and driving, so I know I have the gas tank, and now it’s just about putting the technique and skill at the levels they need to be. I believe I’ll be able to do that in my next fight. I’m young. I have a lot to learn, but I’m going to keep chugging along. I’m going to keep working hard until I get to where I want to be.”

While the setback against Hester wasn’t the ideal way he wanted to begin his UFC run, Enz chalked up the experience and immediately got back to work. Instead of heading back up to Alaska, he sought the tutelage of John Crouch and his team at the MMA Lab, and settled in to prepare for his next showing inside the Octagon.

Although the Glendale-based collective hasn’t been on the large-scale radar for all that long, the team has wasted no time proving their legitimacy. Led by former lightweight champion Benson Henderson, the fighters at The MMA Lab have worked diligently to put the facility on the map as one of the top gyms in all of MMA.

Working alongside a squad of former champions, surging contenders and prospects in the making has pushed Enz to a place where he believes his game is better than it’s ever been.

“I’m making progress in leaps and bounds right now at the MMA Lab,” Enz said. “I have the heart and work ethic, and it was just about finding the right gym and the right guys to be training with. These guys all work very hard and everyone here is disciplined. Now that I’m here, I see what I need to do in order to be successful. My coaches are great and all the fighters have been helping me. I really feel like I’ve come a long way in a short amount of time. I have all the tools to be successful, and it’s just about putting all the pieces together. I feel like we are doing a great job of doing that.”

With all the work and preparation for his next bout at an end, he will be looking to showcase those improvements against Marcelo Guimaraes when the UFC returns to San Antonio for UFC Fight Night: Swanson vs. Stephens on June 28. The tilt versus Guimaraes not only represents the next step in his professional career, but the chance to make good on his second opportunity on the UFC stage.

Enz believes his Brazilian opponent will present some interesting challenges inside the Octagon, but he’s fully prepared to handle whatever comes his way.

“I actually had the privilege to train with Marcelo before,” Enz said. “I’ve sparred with him and rolled with him and it’s kind of interesting that I am fighting someone I’ve trained with before. I think this fight will go to the ground. I have the better wrestling and will be able to dictate where the fight goes. I also like striking as well. I’m sure there will be periods of this fight where I will choose to keep things standing and I’ll be looking for the finish.

“In my fight with Hester, I still had gas at the tank at the end of the fight, and that won’t be the case in this one. In my first fight, I was nervous. It was my first time in the UFC and I was reserving my energy. Things are going to be much different in this fight. Whether it is a knockout or submission; I’ll be looking for the finish wherever this fight goes.”